The challenges for 2015 are the same ones we've failed as a movement to find solutions to, or even act on, for a very long time: climate change and the neoliberal politics of austerity. The co-operative movement needs to work internationally to stop oil companies extracting, and governments and corporations burning fossil fuels for profit, and it should be a part of the international campaign against rich elites profiting from wrecking the climate.

We need to incorporate other conceptions of what a strike can be and co-operatives...need to be a part of this conversation.

The co-operative movement should use COP21 this December in Paris, an important milestone in the international negotiating process, as something to put their energy towards; they should support the call which I’ve made for a climate strike here. Co-ops should close doors and shopfronts and walkout on the streets as part of a solidarity strike for the climate, the theory of which I’ve detailed in this blogpost. In practice there needs to be support for those aiming to disrupt extraction sites, production sites and transportation systems of corporations and the states that support them. Where possible we should work with workers in other industries who are prepared to go on strike.  However, climate change has been defined by automation and the nature of work in the extraction industry has changed, with workers becoming harder to organise as a result. Additionally, the legal terrain for this form of action is yet uncharted and seems unlikely to be voted through by many rank and file, meaning that at least in Europe extraction and production are unlikely to be stopped by strike action in December. We need to incorporate other conceptions of what a strike can be and co-operatives, as social organisations ostensibly providing for their communities, necessarily need to be a part of this conversation. 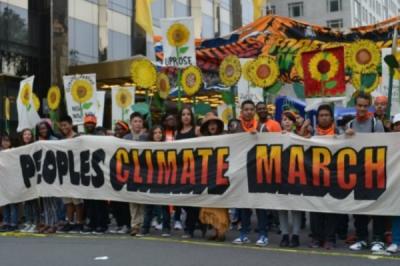 The social strike is an idea that has arisen as a result of the increase in precarious work and the shift in how people are reproduced for employment. For those involved in the work of social reproduction the strike as the simple withdrawal of labour from the factory line has become a more and more elusive prospect, for both employed and unemployed. Capitalism views the destruction of the environment in the same way it does unwaged labour, nothing more than a negative externality to its profiteering. A climate strike, if executed in a worthwhile manner, would aim to combine the ideas behind a social strike waged by communities, with the conventional strike of the unions to disrupt both production and reproduction in society at large.

What I’m suggesting might seem outrageous to those who believe that shutting up shop for a day in the weeks before Christmas is economically dangerous, and that most cooperatives aim to operate in an environmentally friendly way, but I’m going to try and substantiate myself. To begin with, I’ll state that, as people involved in co-operatives, we should be the first to promote (short-lived) economic pain over ecological suicide. Our reaction as a movement which is there for our members should reflect that, the reason co-operatives exist is for the long term benefit of their members and the community, not short term share increases. In larger co-ops managers or accountants may attempt to force the hand of those campaigning against climate change, and this might not be an achievable suggestion in some situations. This is where our networks should come to the fore, co-operatives should work together on this, provide briefings and shared resources on the reasoning behind the strike and make these available not just for their own members, but for other co-operatives and also union members in other industries. At the very least there needs to be financial contributions from co-operatives towards the mobilisations which will be happening across the world in December and large scale support for those actively engaging in struggle. 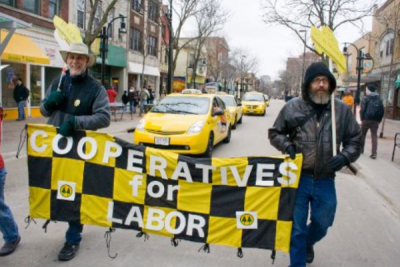 Unions Cabs, a 270 person strong worker co-op in the radical midwestern city of Madison, Wisconsin, USA, are familiar with strikes, having been formed as the result of one in 1979. In 2011, when the Republican governor of Wisconsin Scott Walker was attempting to remove the collective bargaining rights of unions in the state and hundreds of thousands of people were descending on the occupied capitol building, Union Cabs joined the demonstrators in a display of solidarity. Instead of running a taxi company they drove their yellow cabs in a big loop encircling the capitol building, hooting in support of the demonstrators. They weren’t in the same danger as the hundreds of thousands of others protesting, as they collectively make decisions about their working conditions, and they had no bosses. However, their decision to take a hit in the wallet and support their community, not as individuals but as a reputable business supporting workers’ rights, was exactly what a co-operative should be doing.

As a movement across the globe, the extent to which people involved in co-operatives will suffer from climate change is unmitigated. A large proportion of co-operatives across the world focus on food production and sales. Producers are often those hit worst by the impacts of extraction projects and will feel the impacts of temperature rises first, too, with droughts and floods destroying crops and forcing food security to become an international issue. But this is not an issue just restricted to those producing crops; the dual pinch of climate change and capitalism is felt by many, with 15,000 pensioners being killed by fuel poverty in the UK last year alone.

We should be reacting to Energy Companies in the same way Union Cabs reacted to Scott Walker. The Big Six use the cover of rising oil prices to grossly inflate their prices. It is good to see the rise of community energy co-operatives and Co-operative Energy in the UK, but this is not enough. The movement needs to throw its institutional weight against the power of the Big Six energy companies in a way that is critical of the market because, as it stands, it is broken. We might have some of the solution in community energy, but it is incumbent on us to make clear the problem, too. Billboards, adverts and storefronts should make clear the ways in which activity of energy companies are both directly impoverishing people and destroying the climate.

[T]he extent to which people involved in co-operatives will suffer from climate change is unmitigated.

There needs to be support for organisations campaigning on climate change. If Lush, a privately owned company, is willing to put thousands of pounds into funding direct action groups fighting against climate change and austerity, then there is no excuse for the established co-operative movement not to be doing the same or more, in fact. It’s an embarrassment. Instead we’ve seen organisations like the Co-operative Group pour hundreds of thousands into charities and children’s football. Some might see these as worthy causes and argue that the funding is improving people’s lives, but they aren’t examples of the mutual aid that co-operative principles represent. Further, they most definitely aren’t improving the plight of those who are really feeling the pressure from the effects of climate change. There have been some glowing examples of what I’m talking about, such as the group supporting the filming of Tarmageddon (a film about the effects of the Tar Sands, which have impacted the lands and lives of indigenous people in Canada), but these are few and far between.

The co-operative principles do not explicitly mention climate change, just a concern for community which the ICA (International Co-operative Alliance) describe as "Co-operatives work for the sustainable development of their communities through policies approved by their members," but even that requires accepting that, as organisations in a world ruled by corporate elites, there needs to be real support for those taking direct action against corporations and the states who act for them.

What we are experiencing now in Europe is not sustainable development at all. The policies of Austerity are instead the shock treatment to discipline us into compliance. It isn’t enough for us to say, as co-ops, ‘we are developing sustainably, so we’ve covered that base,’ and neglect to put our resources and reputation to support people in other sectors.

All the way from the retail consumer co-ops to the credit union movement, we need to be joining the dots between the catastrophic effects of climate change and the effect of austerity policies which impoverish oppressed sections of society. We should join with and support civil society and those protesting in Paris this December, from funding coach loads of people to get there to shutting up shop as part of a Climate Strike.

Sean Farmelo is a Network Co-ordinator for Students For Co-operation. As a student in Birmingham he helped to found the Green Bike Project and the Birmingham Student Housing Co-operative.  Sean is an editor of Slaney Street - a co-operative newspaper in Birmingham UK, and a member of Plan C. He campaigns on social issues and is a bicycle instructor.