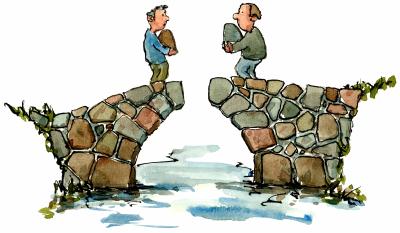 This is a delicate topic––as it involves differences in moral opinion––a conflict in sensibilities as to what is “right” or “just” in the world. It must be clear at the outset that nothing in what follows claims to resolve any moral disputes. Rather, this is an attempt to distinguish two traditions of thought––and explore a coherent approach to community economic development.

Economic democracy often refers to a tradition of political thought that is concerned with the relationship between employers and employees––and advocates democratic control of enterprises by their workers. Thinkers such as Pierre-Joseph Proudhon, John Stuart Mill, Cornelius Castoriadis, Robert Dahl, Carole Pateman, David Ellerman, and Noam Chomsky are representative of this tradition. More broadly, economic democracy encourages any mechanism that build workers’ control over their enterprises, such as the right of workers to organize and negotiate collective bargaining agreements.

Cooperativism is also a political tradition––but with a position that is distinct from economic democracy. According to cooperative thought, enterprises should be controlled by their members and returns on capital investment ought to be limited in favor of patronage-based profit sharing. Under the traditional tenets of cooperativism, there is no necessary emphasis on the “sovereignty of labor”––a term associated with the founders of the Mondragon network of worker cooperatives––but bearing deep roots in Catholic social doctrine and late-nineteenth and early-twentieth century workers’ movements. In fact, the principle of “labor sovereignty” serves to distinguish the Mondragon Corporation from the cooperative system, more generally. In contrast to Mondragon’s principles, the “seven cooperative principles” of the International Cooperative Alliance lack any reference to workers or labor at all––which reflects over a century of debate on the issue (as discussed below).

To be precise, the tradition of economic democracy finds unacceptable the employment relationship itself. Just as we no longer accept a slavery contract, economic democracy does not accept the employment contract. In the late 1800s, at a time when Emancipation was a living memory, it was not unusual for European-American factory workers in the U.S. Northeast to equate employment with “wage slavery.” That usage has diminished over time––especially in light of the significant progress achieved in labor conditions over the last century (as a result of union intervention and government regulation). In the 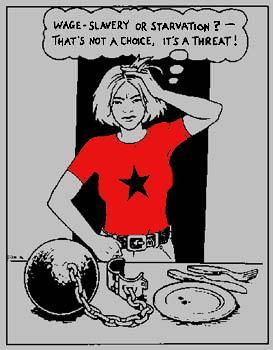 contemporary era, theorists of economic democracy often prefer the term “human rentals” and “renting human beings” as more accurate alternatives to “wage slaves” and “wage slavery.” Nevertheless, economic democracy maintains the technical, legal, and philosophical analogy between slavery and employment. In the words of Noam Chomsky, “it's not an odd view, that there isn't much difference between selling yourself and renting yourself.”

In the tradition of economic democracy, this joint self-employment ought to be a democratic right of all human beings. If, as argued by Robert Dahl, “democracy is justified in governing the state, then it must also be justified in governing economic enterprises.” Indeed, John Stuart Mill thought of workers’ self-management as more than a moral prerogative. Perhaps more boldly, he believed that a labor-managed economy would be the inevitable result of human progress, as “the relation of masters and work-people will be gradually superseded by partnership, in one of two forms: in some cases, association of the labourers with the capitalist; in others, and perhaps finally in all, association of labourers among themselves.”

If one feels that humans have a right to economic democracy––then one looks at business in a new light. The capitalist corporation––in which investors of capital own and control the firm––is inherently undesirable. Workers at capitalist firms do not delegate control––nor does the capitalist firm operate in the interest of workers. Rather, shareholders delegate control and the firm is operated in their interest––and workers are rented to fulfill those interests. And so, for the very same reason, many cooperative entities are also inherently undesirable (speaking from the tradition of economic democracy). In consumer cooperatives, consumers delegate control––and workers are rented by the firm. Vis-à-vis a worker’s perspective, employment at a consumer cooperative is essentially no different than employment at a capitalist corporation. This holds true for marketing and purchasing cooperatives, as well as credit unions.

The Democratic Deficit in Cooperatives

In all of these cooperative entities, workers are “subjects” of the corporation––they do not freely and democratically manage their own productive lives. In this way, most cooperatives are not democratic in the sense that we attribute to political democracy. For example, imagine if the residents of Canada, China, and Mexico elected the U.S. Congress––in recognition of their importance as high-volume consumers of U.S. exports. Would we consider this a democracy? Similarly, when consumers, co-marketers, co-purchasers, or depositors elect the board of a company––such an arrangement does not meet the central criterion of a democracy––that governors are controlled by, and operate in the interests of, those who are governed.

Returning to the central theme––distinctions between labor sovereignty and cooperativism are by no means new. Note this passage originally published in a late-nineteenth century Massachusetts Bureau of Labor Statistics report:

“What benefit would accrue to the employees [of consumer cooperatives] other than those obtained from private employers? None. Exactly the same principles appear to govern the cooperative and the individual employer. The cooperative wholesale pays competition wages and manufactures its goods at the lowest possible labor cost. Its workmen have no share in profits. Its object is to divide the largest possible profits among its customers. Its mode of operation is identical with that of the private employer.”

These differences did not end with the nineteenth century––and were not limited to the United States. Leonard Woolf (husband of Virginia Woolf) wrote extensively on cooperation in the 1910s and 1920s from the United Kingdom. Here, he replicates the debate between “laborists” and “cooperativists”:

"The syndicalist, who objects to the principle of the wage, is necessarily dissatisfied with the co-operative system."

“As to the position of Labour in the movement, and the attitude of co-operators towards their employees, the inquirer will immediately be confronted with two opposite pictures. If he takes his impressions from some co-operative sources, he will conclude that Co-operation has solved the problem of Labour, that wages and hours and conditions of employment are so satisfactory in the [consumer] co-operative store and factory that only those who would never be satisfied with anything would ask for more. On the other hand, if he happens upon a “syndicalist” trade unionist he will learn that the co-operator is no better than the capitalist employer, and that the “hell of the wage-earner” persists under a co-operative no less than under a capitalist system…. The employee of a society remains a wage-earner; in principle his relation to his working-class employer is precisely the same as it would be towards his employer if he worked in a private shop or factory. The syndicalist, who objects to the principle of the wage, is necessarily dissatisfied with the co-operative system.”

In sum, one may very well be an advocate of worker cooperatives—and democratic corporations, more generally—without being an advocate of cooperatives writ large. If one feels that “renting humans beings” is wrong—then, in fact, one would not be a cooperative advocate. That said, there are legal similarities––as well as a common institutional history––shared by cooperatives. For these reasons, among others, there may be many occasions for strategic partnership. But engaging in a partnership does not warrant or require the loss of coherence as a distinct moral vision. Moreover, advocates of economic democracy are not limited to the cooperative structure. They should explore any legal route to democratic majority ownership of businesses by employees––as well as other communities primed for partnership, such as faith-based groups, workers’ and immigrant rights organizations, environmental activists, social entrepreneurship networks, chambers of commerce, employee ownership advocates, and of course, organized labor unions. Finally, once again, non-employee cooperatives bear absolutely no inherent conflict with the principles of economic democracy––and for this reason, housing cooperatives, as well as many purchasing and marketing cooperatives, are excellent candidates for partnership.

To the extent that cooperatives...aim to support economic democracy, the first place to look is internal governance.

At the same time, the democratic business community has much to learn from cooperatives and cooperative advocates. Consumer, housing, credit, and other cooperatives have achieved a scale that allows them to positively impact the lives of millions of people. Many of these organizations emphasize professional management and representative governance structures that are underutilized in U.S. worker cooperative businesses. In addition, large and established institutions have launched some of the most successful cooperative enterprises: Congress chartered the National Cooperative Bank; New York state and local government created and operated the Mitchell-Lama housing cooperative program; and the International Ladies’ Garment Workers’ Union and Amalgamated Clothing Workers of America sponsored many of New York City’s other large housing cooperatives. In contrast, worker cooperative developers typically eschew institutional models of business development and emphasize technical assistance to self-organizing workers. Finally, the National Cooperative Business Association has maintained an effective lobbying presence in Washington, D.C. since the early half of the twentieth century. The United States Federation of Worker Cooperatives was founded in the early millennium––and has not yet established a D.C. office.

Finally, it must be made very clear that the above is an attempt to distinguish two lines of moral thought. Nothing in this discussion aims to demonstrate the “correctness” of one set of moral feelings or opinions over another. The human world suffers no lack of areas for improvement. People should likely focus on what they feel is most important and where they can make the biggest impact.

Editorial note: The release of this article coincides with an excellent new Swedish documentary that offers an in-depth exploration of economic democracy.

Author’s note: This discussion is strongly influenced by David Ellerman’s work in synthesizing the tradition of economic democracy into a coherent moral framework. For further reading on the subject, the author recommends David Ellerman’s The Democratic Corporation, Robert Dahl’s A Preface to Economic Democracy, and Noam Chomsky’s Dewey Lectures.

P { margin-bottom: 0.08in; direction: ltr; color: rgb(0, 0, 0); widows: 2; orphans: 2; }A:link { color: rgb(0, 0, 255); }
Christopher Michael, Esq. is completing a JD/PhD in political science at the City University of New York with a focus on cooperative finance, community economic development, and labor law. Chris is General Counsel of the ICA Group, a not-for-profit organization that has been dedicated to the democratization of business enterprises since 1977. He is also Executive Director of the New York City Network of Worker Cooperatives; a Fellow in the Community & Economic Development Clinic at CUNY Law School; and an Adjunct Assistant Professor in the Department of Management at CUNY Baruch College Zicklin School of Business.