“Oh, the places you'll go! There is fun to be done!

There are points to be scored. There are games to be won.

And the magical things you can do with that ball

will make you the winning-est winner of all.

with the whole wide world watching you win on TV.

Except when they don’t”

“One more round. We can’t end on this note,” Brian said, trying to be conciliatory. 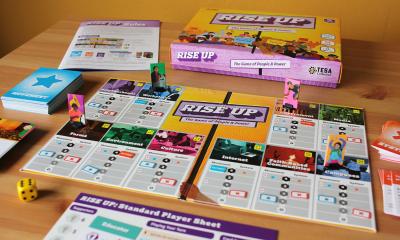 “No, it’s time to go,” Maria said. True, it was getting late. It was the end of the week, we were all tired. But Brian was right. Just a couple of hours earlier it had been an idyllic scene of camaraderie: seated on the floor around a chesterfield ottoman with a game board on top, the fire keeping us toasty, drinking decaf and eating chocolate.

But our little gathering of trusting friends had just sunk into a feeling of conflict and distrust.

As they stood in the dark kitchen to say goodbye, and I awkwardly searched for the dish they had brought for our potluck, the sense of estrangement between us was palpable. As the door closed behind them, my housemate and I began to discuss what just happened.

What had happened, we realized, was not just a game night gone wrong—it was a crisis of story.

Codenames, a popular game that combines the rules of Taboo with the spirit of the Cold War (we were separated into two teams of spies), was seemingly made to foster imagination, teamwork, and a general atmosphere of fun. But instead it got us caught up in a values system contradictory to our goals as individuals: a sense of community.

For example, in most board games, you play as a one-person team, and you want to win, not lose. You might play to win while also playing to make someone else lose if you are a true game strategist. Teaming up against others adds a thrill, but if you make a mistake, you could be labeled a cheater.

Cheaters are generally subject to taunting and often cannot redeem themselves, while the other players become their “victims”—a sure prescription for violent feelings. Eye contact should be avoided, otherwise people might guess your thoughts and next moves. Hierarchy rules. Play your turn, but don’t help others. We have turned games meant for sociability into training grounds for anti-social and violent behavior. The scientific term for this is “priming.” Board games are not values-neutral.

Consider something as seemingly benign as Scrabble. Think about the game board and all of the ways players have to manipulate tiles to get the triple word score, or when someone takes too long for his turn every turn, or when someone misspells a word, or uses a proper noun. It only takes one person to get impatient before the game turns sour. Take away all of those rules and incentives, and the game could somehow lose part of its allure.

Last year I had the privilege of teaching my friend Catalina to play checkers. After she figured out how the game worked, she did everything she could to “lose” her pieces and make me win. And she did so with a grin of satisfaction. What was the secret of her contentment? In her mind, we both won. She was 4 years old! Yet there she was, hacking the age-old game and its competitive win-lose dynamic.

Where does that leave us adults?

Happily, there are other games out there now that can just as effectively bring out a better story of who we are and what we can do together—by challenging us to turn our competitive drive toward solving a social problem. After that distressing night with our friends, I decided I’d better try some of these other games. I ordered two among five available from the Toolbox for Education and Social Action Collective: Rise Up! and Co-opoly, both less than a decade old.

A major consideration of mine for choosing these games was their respective emphasis on the two complementary wings of nonviolent action: constructive and obstructive program. In the former, you build alternatives to replace the system of harm; in the latter, you obstruct the violent system from working. Effective nonviolent strategy requires a skillful weaving together of both of these elements.

It’s no secret: Movements require a lot of decision-making.

In Rise Up!, a game focused on winning a people’s movement, social capital is key. The creative choices “The Movement” has at its disposal are not measured in dollars, but supporters. It’s the responsibility of every player to make cooperative sacrifices to ensure that their supporters increase. Moreover, each player’s turn is the opportunity to lead The Movement and call the shots. When it’s your turn, you can play it until you are ready to pass it on to another.

But there’s a familiar catch: You risk losing to “The System” if the relationship between players breaks down and someone thinks that the movement’s success depends on their leadership alone. We’re all in it together.

It’s no secret: Movements require a lot of decision-making. Through creative questioning—for example, “What did your movement do when the Press sided with The System?”—Rise Up! drew out our capacity for patient, constructive dialogue. Just a few hours after playing, a friend wrote to express his eagerness to play again soon. He said he enjoyed the opportunity getting to know everyone in the group in a new way, and this is someone I’ve known for at least three years in a creative and friendly work environment.

Could Co-opoly measure up to our new expectations for fun? Absolutely.

While setting up the board, my friend pointed out that it must be missing pieces because there was only one player piece. After shaking the box a bit to find the missing pieces, we had a good laugh instead: There is only one piece because we were all on the same team! Starting a game that way certainly lightens the mood. No spies, no code names, no scores. Just teamwork and laughter.

Another intelligent feature of this game is that all of our best skills are used. For example, one player had a mind for managing money and, after consulting with us, set aside group funds for future ventures. It was appreciated by all, and we let him know. Another player had a talent for building excitement and enthusiasm for what our cooperative was doing in the world—in this case, a baby-dragon art school as well as a local food co-op.

We still need spaces for fun and opportunities for reinforcing what could be—what will be—crucial to making a better world. Games like Rise Up! and Co-Opoly actually change the narrative that makes violence normative by turning the story of competition, scarcity, and isolation on its head. Everyone wins or no one does.

We don’t play against one another for a meaningless goal of simple victory over the other players; these games ask us to play with one another while imagining the real possibility of a better society. Games that pit people against each other and send people to jail while others get rich are considered cultural classics, but their time is up. We can all win.

Stephanie Van Hook wrote this article for YES! Magazine. Stephanie is the executive director of the Metta Center for Nonviolence, author of Gandhi Searches for Truth: A Practical Biography for Children, and host of Nonviolence Radio.  Find all this at www.mettacenter.org.