Assemblies of the Commons Emerge in France 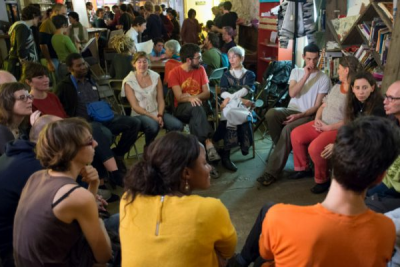 In France, the theme of “commons” as a possible structure for society re-emerged gradually since the late 90s and French books on the subject have been published since the 2000s.

This question has been confined to the field of digital commons for a long time, and has expanded more and more in recent years into areas such as community gardens or food cooperatives.

Events clearly identified as related to commons began to be organized in 2009 (“Brest in commons“) and are scattered over thirty territories in 2013. The same year, Michel Bauwens popularized the concept of “Chamber of Commons” (earlier proposed by David Ronfeldt in 2012) and quickly supplemented it with the concept of “Assembly of Commons”, in an appeal: Proposed Next Steps for the emerging P2P networks and Commons.

After another highlight at the “Forum of Cooperative uses” of 2014 and the self-organized festival “The Common’s time” in October 2015 which saw the emergence of 344 events with the logistical support of VECAM association, the idea of federating the commons as permanent assemblies was mature.

After this festival, several Assemblies of Commons begun to emerge explicitly in Lille, Toulouse, Brest and several other big cities in France. It must be understood that these assemblies are all at the “incubation” stage, and each of them is inventing its own operation as informal structures. For most, they met only once or twice.

They have a French wiki to document and exchange practices, and a website to communicate to the outside.

The main purpose of these assemblies is to be a forum to exchange experiences and bring together commoners. They also aim to promote the creation of an ethical economy that can create livelihoods around the commons. They try to identify and develop commons through mapping and meetings.

The project is related to similar ones in France and in other countries as from the beginning, we felt the need to create communication tools on the web, such as a wiki. Thus other Francophone assemblies of commons (Toulouse, Brest, Rennes, but also Liège in Belgium …) could join the dynamic. The projects are connected through the wiki and Facebook groups and can learn from each other.

For the moment we have no links with other assemblies in the world, but also because they do not yet exist to our knowledge. Francophone assemblies are interconnected but also to local associations which were already dedicated to the commons for many years.

The Assembly of Lille

One of the most active assemblies is located in Lille (North of France) where meetings are held once a month since October 2015. There, news from different commons of the territory are shared, but also skills, ideas and knowledge in the form of self-managed workshops organized by those who are present. All members of the assembly have the opportunity to offer workshops and other members join the workshops that they like. 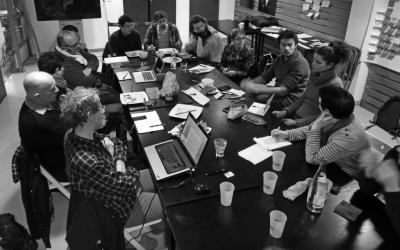 The assembly of the commons in Lille was started by a group of people who were the co-organizers and participants of “Roumics“, an event focusing on digital inclusion and digital rights; the launch co-incided with the ‘Temps des Communs’ , a multi-day coordination of events in the French and francophone world, held in October 2015. More specifically, it started around the workshop “Identify and promote convergence around commons” that has gathered the first group of people interested in the subject including members of the Interphaz association. Interphaz is a popular education structure whose purpose is to gather citizens around projects that become mediation places.

After “Roumics”, two informal meetings took place to discuss the notion of assembly of commons. Then the idea was structured around a third meeting entitled “Building in action the assembly of commons” which was announced on Facebook and in which a first organization with workshops was tested.

As I created www.semeoz.info in september 2015 to observe collaborative and constructive actions around the world, I quickly heard about the commons and I wanted to participate in the third meeting in Lille. Coming from Toulouse a few months ago, it was also for me a good way to create a new social network in connection with my ethical values.

All citizens are invited to participate in the assemblies. People come from different backgrounds: associations, local elected officials, commoners… During a round, which aims to create cohesion, everyone presents and describes the common or other structures in which they participate. In no case a person represents an organization. People attend the assembly as individuals (and they often say they are relieved to be able to do).

There are wide disparities between different groups: some have known the concept of Commons for many years, others have just discovered the concept and like to participate in the introductory workshop. Workshops can be held on site the day of the meeting, or in a remote way. Each workshop is documented.

The operating mode adopted for the moment is peer-to-peer and decentralized. However, the members of the assembly are careful to leave many written traces of their work (mainly on the wiki) as it follows a stigmergic strategy – which is a mechanism of indirect coordination. This may scare some people, or be considered as inefficient because it is informal, but in reality, the workshops are all operational one after the other, and the objectives of the group are achieved without requiring votes or endless meetings.

Governance is currently based on consent: as long as nobody makes a reasoned objection, the meeting records progress. After six months of operation (seven assemblies), no major objections were raised. Should this happen, the meeting would focus on dialogue rather than voting. The emphasis is put on welcoming contributing impulses and trusting people as a starting point. The assembly members prefer to build together rather than “fight against”.

To date, the assembly is supported financially by a local association which pays for room rental. It works closely with the Chamber of Commons whose future vocation is to support the assembly.

Despite the involvement of several people (also in Lille), the chamber of commons is still a concept because it seems easier to federate individuals than established structures which are often dependent on local political and civic institutions. There is nevertheless a website that offers explanations to better publicize this proposal.

In Lille and Toulouse, a “Social Charter” is being written. It will define the basic objectives of the Assembly (ethics, shared values, inclusion in the local “ecosystem”), its governance, tools, methods, partners…

This is just the beginning…

And if we could share some advice for people / commoners who would like to establish an assembly of the commons, we would say:

The Future of the Assemblies

It is impossible to know the future of the assemblies. I cannot make any prospective forecasts regarding the commons movement. If the time has come for the deployment of a peer-to-peer society, then it will naturally emerge. From my perspective, this emergence depends primarily on the personal development of individuals. According to me, self-awareness is the best way of distinguishing equality from egalitarianism and of avoiding working unconsciously on the establishment of forms of totalitarianism despite good intentions.

I therefore believe that commons can develop harmoniously only on the condition that the individuals integrate profoundly that “peer” is not synonymic of that which is “identical to me” (identity as homogeneity) but rather is talking about connecting and loving radical otherness (p2p identification as heterogeneity). Finding what we have in common does not mean erasing our singularities, but rather learning to work together with them in order to create something in common, which is very difficult to achieve (indeed, the work of a lifetime)!

If the development of assemblies of the commons moves in this direction, the network meetings are expected to grow more and more in territorially, based on the existing network of the commons. In principle, the assemblies should not consolidate too large geographic territories, and allow smaller communities to interconnect with each other.

After training in biology, anthropology, psychology, and communication, and after several jobs as a community manager, web project manager, and in fair trade, and after passing through the different statuses of employed, freelance, and shopkeeper, Maïa Dereva suffered a severe burn-out at the end of which she said: “Now I want to work exclusively for the common good.” She then created the website semeoz.info which is an observatory of collaborative and constructive practices, and devotes time to many projects such as the P2P Foundation.