[Editor's note: This article introduces an exciting new development at GEO — "Movement Pages". These are resource pages devoted to movements related to our own, that will be curated by activists from those areas. We hope that this will help stimulate cross-pollination of ideas and practices between our groups, and help to "de-silo" people who are working on different, but related, issues. We begin this experiment with the Transition Environmental Movement page, curated by Pamela Boyce Simms and members of the Mid-Atlantic Transition Hub.  You can find our Movement pages in the sidebar, right underneath the "Make a Donation" button.]

The Mid-Atlantic Transition Hub (MATH) will curate the Transition Environmental Movement page and provide a spectrum of articles from around the web, the country, and the world that chronicle what is happening with the Transition movement in the trenches. Material on this movement page will reflect MATH’s practice of ongoing, regenerative self-assessment as the Transition social experiment, which facilitates the weaning of localities away from fossil fuel addiction, deepens.

MATH is a network of “Transition towns and cities,” and environmental activists in the six-state Mid-Atlantic region. The regional network support groups of local residents who strategically build foundations of long term community resilience against the backdrop of climate change, resource depletion, and economic contraction. The MATH network is building a leaderful, egalitarian movement through the lenses of systems thinking; imprinting natural living systems as the template. The network is committed to creatively developing the Transition movement in the region by meeting the emergent needs of people where they are. Alliance with the cooperatives movement is part of that process.

The Transition and cooperatives movements both offer powerful “new economy,” alternative pathways to stepping away, and recovering from an abusive, extractive growth-economy. They encourage unplugging, and secession from the corrosive mainstream matrix, and commitment to resilient social and economic practices that foster the unity of people and the planet.

Strong community will be a requisite of survival and thriving in the future.

Yet, the full richness of the intersection between Transition as it manifests in the Mid-Atlantic region, and the cooperative movement promoted by GEO, lies in the shared vision of consciously creating collaborative culture. “Transition” connotes profound change. Accelerating climate change means that incessant “transitioning” is the new norm to which we’ll be perpetually adjusting. The type of fundamental transformation called for begins from within. Generation and experience of cooperative culture sparks a commitment to inner transformation. It creates the space for the progressive self-mastery in community; most needed in turbulent times.

Strong community will be a requisite of survival and thriving in the future. Sustained focus on personal growth in service to the collective whole will see us through the climatic changes, resource exhaustion, and economic instability that lie ahead.

Deliberate work on self-awareness that undergirds successful democratization of power in cooperatives and Transition Towns alike is messy and uncomfortable. It takes effort --especially for Americans acculturated to perpetuate social and economic fragmentation. It is tantamount to swimming upstream. Every facet of power-and-control corporate capitalist culture is trained on sustaining the illusion of separation. It’s much easier to deny the need for, or set up external supports that deflect the need to do the required inner work.

Yet this is the work that makes Transition and cooperative initiatives “stick” in the long run. Authentic cooperation requires people to change deeply imprinted habit patterns that divide us and are continually reinforced by society. Change requires focus on the desired endgame for the whole. It requires understanding, valuing, and actively embracing the long arc of evolving human communitarian consciousness. This is where participating in a community-of-practice can be the lifeline that helps movements remain awake, aware, and endure on the journey upstream. 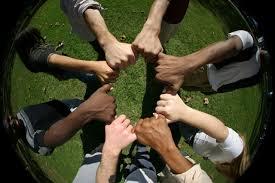 To this end, GEO and MATH have also teamed up to work, along with other networks committed to democratization of power, on a Spokescouncil of Egalitarian Resilience Networks within the MATH regional network constellation.

The Spokescouncil emerged out of a shared desire among a group of activists to move beyond advocating for equality, toward intentionally and authentically practicing egalitarianism. A primary Spokescouncil goal is to support and challenge participants to deepen egalitarian, whole systems thinking and practices within their networks, even as they foster social transformation through their work. Fruits of this provocative collaboration will also be offered on the GEO-Transition Environmental Movement page.

The Transition and Cooperative movements are strengthened through our pact to consciously cultivate inner growth and cooperative culture. We look forward to sharing with readers.