This article originally appeared in The Progressive Magazine.  Reprinted with permission.

When Hurricane Sandy touched down in New York City two days before Halloween in October 2012, Luis Casco was in his bungalow in Far Rockaway, New York. Like many other residents of the neighborhood on the Rockaway Peninsula in Queens, he and some friends had decided to wait out the storm. When they finally left, the water was chest-high, and swimming was their only option. 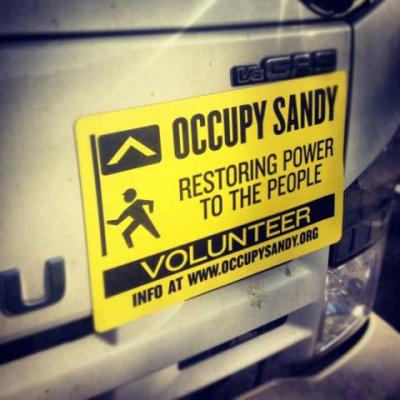 Sandy killed more than 200 people in several countries, including more than 100 in the United States, according to the Centers for Disease Control and Prevention. At least ninety-seven people died throughout the New York City region, most in the boroughs of Queens and Staten Island. The Rockaways took some of the hardest hits, including widespread flooding and a fire that destroyed more than 100 homes.

The day after the storm made landfall in New York, President Obama declared parts of New York, New Jersey, and Connecticut major disaster areas, which opened them up to aid from the Federal Emergency Management Agency (FEMA). But charity organizations including the Red Cross did not establish a significant presence right away, drawing widespread criticism. The Staten Island borough president called the group’s slow response an “absolute disgrace,” suggesting residents stop giving it donations.

In the hours and days after the storm, in the Red Cross’s absence, an ad-hoc group of former Occupy Wall Street organizers came together to form a disaster relief network named Occupy Sandy. They delivered food and flashlights to public housing projects. They went door-to-door in tall buildings that had lost elevator service, sometimes with elderly residents stranded at the top.

Occupy Sandy volunteers helped transport people to shelters. They provided hot meals and supplies. They opened an Amazon.com registry to let people see exactly what was needed and where it should be sent. They made doctors and lawyers available to people in need of medical attention or legal advice. Donations poured in from around the world, totaling about $1 million in cash, according to Tamara Shapiro, an Occupy Sandy organizer.

The group pursued that immediate disaster relief work for about two months, until the end of December 2012. Then the network began brainstorming ideas for longer-term projects. One became Rockaway Wildfire, a community group focused on empowerment and activism. Another became the Worker-Owned Rockaway Cooperatives program, which aims to develop worker-owned businesses in the Rockaways run by people who faced displacement and unemployment after the hurricane.

It was an initiative that would deliver new hope and fresh opportunity to people like Luis Casco. 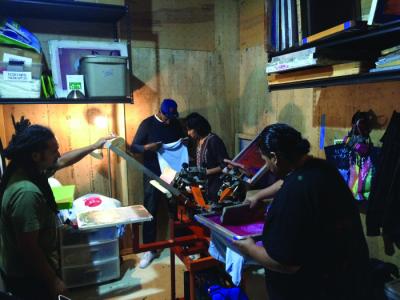 Three years after Casco watched the streets of his neighborhood of Far Rockaway disappear under water, he was on his way to becoming a worker-owner of Peninsula Custom Prints, a screen-printing cooperative. It was the third worker-owned cooperative created in Sandy’s aftermath, after a bakery and a construction company. All were born out of a collaboration between Occupy Sandy and The Working World, an organization that helps build cooperative businesses in low-income communities in countries including the United States, Argentina, and Nicaragua.

In the months before Sandy, the Rockaway Peninsula was home to 115,000 working- and middle-class residents. That year, the unemployment rate for the zip code encompassing Far Rockaway was 12 percent.

Occupy Sandy and The Working World began holding informal information sessions, which turned into a twelve-week training program in the spring and summer of 2013. Some of the participants had been unemployed before the storm or had lost their jobs because of it. Others had been employed but found the idea of owning their own business appealing.

Henry Lezama was part of this latter group. He’d been working construction for years and grown frustrated watching his boss pocket most of the profit from jobs on which he’d done almost all of the work. Occupy Sandy was already using his church in Far Rockaway as one of its hubs, and Lezama got involved with the training course after hearing about it from friends: “They put that in my mind, that we can be the worker-owners. So I said, ‘This might work.’ And then they were right.”

After the twelve-week program, Roca Mia Construction opened for business with five worker-owners and secured its first few jobs quickly, helping to repair houses in the Rockaways.

The worker-owned co-ops then held a second round of training sessions, which led to the creation of Peninsula Custom Prints. Like Roca Mia, it began with five worker-owners, none of whom had experience with screen printing. But they leapt at their chance to buy a screen-printing machine at a discount. It sat unused and in pieces in Casco’s bathroom for six months. 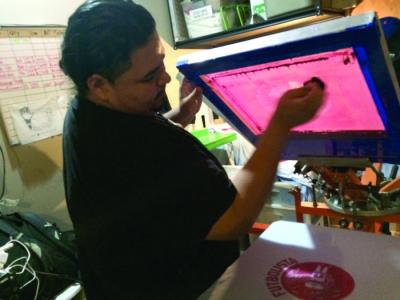 That changed when Casco heard that the Park Slope Food Coop, a popular grocery in Brooklyn, was looking to fill an order of 10,000 canvas totes. Peninsula connected with Julie Goldsmith Abad, who runs the Occupy Wall Street Screenprinters Cooperative, and developed a plan for her to teach them screen printing. A loan from the worker-owned co-op in the Rockaways helped pay Goldsmith Abad a fair wage and covered the rent for a portion of studio space in Prospect Heights, Brooklyn.

On a recent Tuesday afternoon, Peninsula’s orange screen-printing machine—named Wendy, after the orange-haired Wendy of the fast-food restaurant chain—stood prepped to print bags for the Park Slope Food Coop. The worker-owners hope to expand their clientele and return to the Rockaways to become an active part of that community.

“We just want to make sure that our team is well trained to take huge orders,” Casco says. “As soon as we could get all that packed down, we could go back to the co-op and be like, ‘OK, we are ready. We want to start our business. We want to incorporate and get ourselves a location on the Rockaway.’”

The number of worker-owned cooperatives in the United States has been growing exponentially in recent years. Co-ops still comprise a small percentage of overall businesses, but examples in other countries prove their resiliency and, according to some, their advantages over the traditional sole-proprietor model of business ownership.

In 2001, Argentina defaulted on almost $100 billion in sovereign debt. People took to the streets in protest, capital fled, and the country dived into an economic depression.Factories stood empty. But then former workers at a handful of these factories reopened them under their own collective ownership, often facing violent eviction attempts by police, as documented in Naomi Klein’s 2004 film The Take.

After attending a screening of the documentary, Brendan Martin, then working on Wall Street, quit his job and moved to Argentina, eventually founding The Working World to provide the cooperatives with investment capital that large institutions were unwilling to give. Their model was Mondragon Corporation, founded sixty years ago in Spain by a priest and labor organizer and now the world’s largest worker cooperative, with more than 60,000 members and 14 billion euros in revenue in 2014.

“We attempted to pursue the same philosophy as in Mondragon, which was to have capital that served the needs of people,” Martin says. “It was purely just a bunch of Argentinians and myself who cobbled together what kind of support we could. We ended up becoming, nevertheless, the primary lender to these worker-owned businesses.” Today, Argentina’s reclaimed factories provide examples for those looking to create or convert to worker-owned businesses. 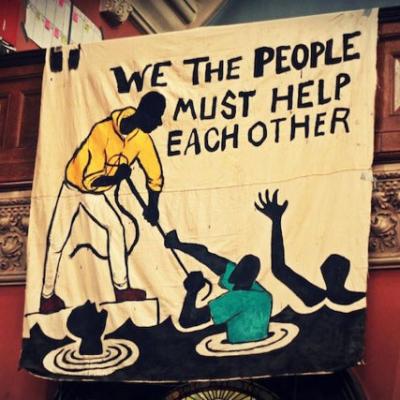 Here in the United States, most worker-owned businesses are much newer than Mondragon or even the factories in Argentina. According to Esteban Kelly, the co-executive director of the U.S. Federation of Worker Cooperatives, about 60 percent of today’s co-ops have formed since 2000 and about 31 percent of them have formed since 2010.

The U.S. Federation of Worker Cooperatives estimates that there are now between 300 and 400 worker cooperatives in the United States, employing about 7,000 people. Women comprise 68 percent of those worker-owners, and people of color make up a majority in co-ops formed in recent years, Kelly says, adding that worker cooperatives produce a total revenue of about $367 million annually. Most retain a small staff: The median size is about ten worker-owners.

As the number of cooperative businesses has grown, city governments have also begun toying with the idea. In July 2014, New York City allocated $1.2 million for expanding worker-owned cooperatives—the largest investment in cooperatives ever made by a municipal government in the United States. The city council dedicated the funds to helping create twenty-eight new cooperatives and assisting the growth of twenty existing ones.A year later, it announced an additional $2.1 million to expand its cooperative initiative and create twenty-two new worker-owned businesses.

Madison, Wisconsin, approved a plan to spend $1 million every year for five years, starting in 2016, on developing cooperatives. 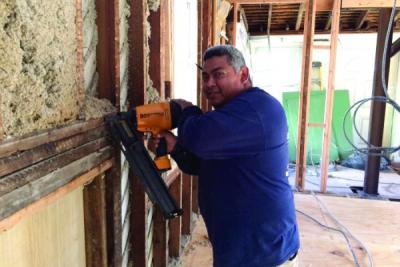 The Rockaway worker co-op grew not from municipal investment but from community desire. A need for better jobs had long existed in the Rockaways, but it took a crisis like Hurricane Sandy to turn it into an urgent public cause.

Developing cooperatives as a form of disaster relief is not a new idea. It was, after all, financial disaster that led Argentina’s workers to occupy their factories and claim ownership. “I think that crisis is a moment where we have to stop and ask questions,” says Shapiro, the Occupy Sandy organizer. “There’s a disruption in society that allows us then to do things differently. We can ask ourselves questions and reorient where we’re going.”

In moments of crisis, particularly in the case of natural disasters, money pours into communities. Deciding how that money is spent gives communities an opportunity to move away from business as usual and develop innovative ideas, including the Rockaway worker co-op program. Disaster relief can aim to bring about a return to the pre-disaster status quo, or it can do what Shapiro describes and “reorient” the way in which a community is organized.

When Occupy Sandy decided to turn its attention from immediate relief to long-term projects, it chose to reorient toward community resilience.

“Worker co-ops end up having this ripple effect and improving local economies. And then they also anchor wealth back in the community,” explains Kelly. Instead of wealth going wherever a business’s owner lives, it remains in the co-op’s neighborhood, distributed among a handful of people. This distribution also lessens the financial risk for everyone involved.

Within the cooperatives themselves, organization is a complicated question. Governance structures vary from co-op to co-op, from informal decision-making to a formal managerial structure. The key rests in accountability: In a co-op, the manager answers to the worker-owners. 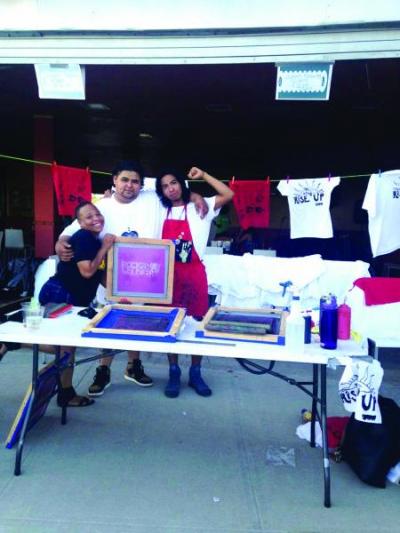 In newer, smaller co-ops like Roca Mia and Peninsula Custom Prints, these structures remain relaxed. At Peninsula, members sometimes give up their share of the profits if one of their peers has greater need that month. Roca Mia splits its profits evenly among members, adjusting for differences in the time commitments of its five worker-owners.

In the Rockaways, where Casco eventually hopes to root Peninsula Custom Prints, many are still experiencing the fallout from Hurricane Sandy. Recovery moves slowly, but progress is visible: The boardwalk that the hurricane tore to pieces is being rebuilt; its first section opened last May. But for the worker-owners of these new cooperatives, things have shifted profoundly since Occupy Sandy and The Working World held those first training sessions in a church three years ago.

“They changed our minds,” says Lezama. “They came and then they made us look at things differently—better.”

Rebecca Nathanson is a freelance journalist in New York.