Asking the question "Why aren't there more worker cooperatives in the United States?" raises questions about worker co-op development models and the participation of cooperatives in their development. In a movement predicated on co-op members running their own lives, homes, finances, food stores, etc., having co-ops and their members control their own development has been strangely off of the agenda. Most worker co-op development - and often the development of co-ops in general - is grant funded, and implemented by non-profits. Does this conflict with some of the basic principles of the co-op movement, and the international examples of thriving co-op complexes? Although only covered here in the briefest manner, this article will attempt to answer that question, explore some of the challenges of using worker co-op members and money to develop and fund more worker cooperatives, and address the discrepancy between the number of worker co-ops in the US compared to other countries. Here I present the Valley Alliance of Worker Co-operatives (VAWC) model of worker co-operative development.

As a new generation of cooperators recognize the value of inter-cooperation and the benefits of an interdependent movement, there are many directions to consider in developing our model. In times of growth and shifts in our movement, remaining true to cooperative principles and values becomes a necessary practice and it is our challenge to fund, structure and govern our development in this fashion. VAWC hopes to bring awareness to the limitations of the current predominant model as much as we would like to demonstrate why worker co-ops need to take responsibility to direct and fund development themselves.

In this spirit the following piece offers what a group of worker co-ops in western Massachusetts and southern Vermont have built in response to the gap in worker co-operative development.  In asking about the number of worker co-ops, others questions come to mind. Who's movement is this, and who shall direct it? Are there lessons that can be learned from successful worker cooperative complexes outside the US? How can we best mobilize our members? resources for shared growth and success? And, perhaps most importantly, how can cooperative development be funded and guided by co-ops themselves so that it serves our needs and priorities?

What is the Valley Alliance of Worker Co-ops?
Following conversations at an Eastern Conference for Workplace Democracy conference in 2005, co-operators came together to share resources, pool knowledge and develop working solutions to the questions above that are too large for individual co-ops to take on individually. Building relationships of trust and friendship in a framework of the needs and goals of worker co-ops surfaced. VAWC provides a formal venue for worker co-operatives to communicate and draw on resources and serves as a ?meso-level? organization between individual co-ops and national organizations.

The Valley Alliance of Worker Co-operatives (VAWC) is a ?co-op of co-ops? that has come together as a means of strengthening the efforts of our individual co-ops to develop their businesses, serve their members, and contribute to the wider cooperative economy. VAWC is itself an expression of cooperative principles and is rooted in the ideals of cooperation, mutuality and solidarity. Our core goal is to provide ourselves with the resources and support we need to advance our cooperatives, empower our members, and benefit more people in our communities. For descriptions about what we do, see our Membership Information brochure, our website ? www.valleyworker.org ? or contact us at info@valleyworker.org. Mlley.

Why aren't there more worker co-ops in the US?

There are fundamental issues of accountability and funding with predominant worker co-operative development models in the United States. Development funded by private grants and/or the federal government, and directed by non-profits remains un-accountable to co-ops and the development of genuine democratic participation of members. Also, non-profits are often charged with development of all types of co-operatives - consumer and producer co-ops as well as worker co-ops - which require different skill sets. So here we have organizations that aren't structured as cooperatives themselves implementing development as dictated by private or federal funds. This raises important questions both about the priorities of our movement, as well as about the position of cooperatives in participating in the growth of their own model.

Coupled with this discrepancy has been a lack of cooperatives stepping up to direct and fund development themselves. As framed above, a goal of this piece is to place the responsibility of why we have so few cooperatives squarely on the models of development, not the personnel in development. We would like to propose a new dialog to address this and shift thought away from how to best utilize grants to How can worker co-ops direct and fund their own development? And How can we build a development model that is guided by our principles?

In two years of VAWC operating a member-run development model, two traditional businesses have converted to worker co-ops. In 2009 three workers at Valley Green Feast, a sole proprietor farmer produce delivery service, approached us with the idea of converting to a workers' collective. VAWC laid out a process with prospective members, and went through the process of developing by-laws, articles of incorporation, a mission, vision, decision making structure, governance and internal capital accounts. Valley Green Feast celebrated their first year anniversary as a worker co-operative in April of this year and is paying the former owner over time.

In 2011 VAWC was introduced to a group of health care providers who were planning on buying an existing practitioner's business. VAWC supported them on formulating the loan packages, and again developed by-laws, decision making structure, governance, and internal capital accounts. In their sixth month of operation as a cooperative, sales have remained growing, renovations are underway for new practitioner's space and other workers are being approached and groomed for membership as independent contractors are being phased out.

To be clear, this critique of the non-profit developer model puts the responsibility on the model which is ill-equipped to deal with the needs of worker cooperative development, not those who are attempting to implement it. We would like to insert into the dialog of worker co-op development the issue of the continual lack of a formal venue directed by co-ops themselves to fund development. The space to communicate the needs of a worker co-op, where the agenda is developed and its facilitation conducted by worker co-operators, is a very powerful and productive example of an autonomous association of persons united voluntarily to meet their common economic, social, and cultural needs and aspirations through a jointly-owned and democratically-controlled enterprise (the International Co-operative Alliance's definition of a co-operative).  The absence of such a space in the US contradicts the co-op values of independence, self help and self-responsibility; the co-op principles (mentioned above); as well as the examples set by models of successful development in other industrialized countries. 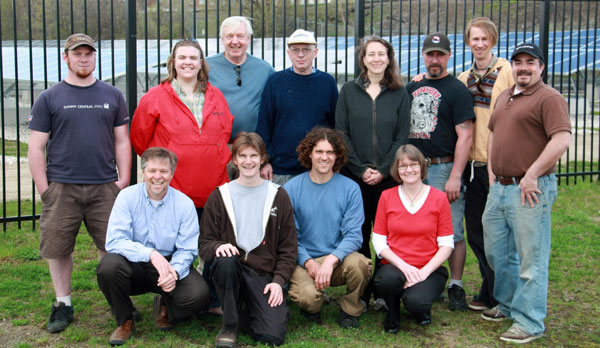 Members of PV Squared, a solar panel installation cooperative, and one of several worker cooperatives in Massachusetts' Pioneer Valley.

Who's movement is this, and who shall direct it?

Two of the seven co-op principles "Democratic Member Control," and "Member Economic Participation" provide clear boundaries and responsibility regarding who participates and directs cooperative entities. Successful international models in Italy and Spain provide real life examples of what happens when cooperators are put in the proverbial driver's seat.  Decisions regarding what services are provided, what educational programs are implemented, the priorities of where time is spent, etc., are in the hands of cooperators and the results are astounding. Cooperatives as a whole, though worker cooperatives in particular, are responsible for the growth and strength of our movement more than any other group.

Another co-op principle "Cooperation among cooperatives" provides a strategic format for the survival and growth of co-ops and the cooperative movement as a whole. Sharing and promoting common principles and resources provides cooperatives with a distinct advantage over traditional businesses or organizations for focused collaboration in outreach, education, community participation and adhering to mission statements. Utilizing traditional products or professional services when there is an opportunity to utilize goods and services of those who share these common principles is a missed opportunity in developing our individual co-ops and the cooperative economy that will sustain us.

Are there lessons that can be learned from successful worker cooperative complexes outside the US?

Mondragon and the Emilia Romagna region of Italy are perhaps the most commonly referenced cooperative systems in our movement. In 2009 Mondragon had $25 Billion in assets, $22 Billion in sales, 85,000 workers and 256 co-ops. In Emilia Romagna, a region about the size of New England, there were 4 million people, 2/3 of which were co-op members and 10% of which worked in any of the 7,500 co-ops. Of those 7,500, 5,000 are worker co-ops federated through a variety of political and religious alignments. Though unique in many respects, they share a set of common characteristics:

While implementing these tools requires a shift in our movement, a dialog of how to go about implementing this has value for building participation from co-ops.

How can we best mobilize our members' resources for shared growth and success?

Member resources are stronger when creating support organizations based on our 7 principles in practice and in mission. Having support organizations directed by co-ops ensures that: needs are being met; development is focused on co-ops; co-ops are developed within a system of support; and that on-going support is provided with consistent advisement funded by dependable sources.

We would argue that a model of putting member resources into grant funded organizations that are not co-ops themselves produces adverse effects on the movement and its cooperatives. A few of these effects: co-ops are seen as charity; undependable and varied funding; grant language limiting activity of developers; non-cooperative entities providing advisement for co-op entities; activity of non-profits taxes current co-ops by drawing on expertise and resources of co-ops; large amounts of resources spent on fundraising as opposed to development work.

An important issue with worker co-op development's current model is the creation and development of co-ops outside of any cooperatively run support organization or cooperative support system. Instead of forming cooperative enterprises in a network of support whose success depends on the success of the co-op in the long term, co-ops are developed with a dependency on external, and often expensive, expertise. Further, dependence upon non-cooperative support increases the chance that unpredictable and, at times problematic, advisement that runs in conflict with co-operative principles and the co-op itself will predominate.

And, perhaps most importantly...

How can cooperative development be funded and guided by co-ops themselves so that it serves our needs and priorities?

Co-op movements that utilize their own surplus, rather than relying on grants, are predominant in size, and exemplify co-op principles and service to their members. Instead of following funds and direction from the federal government or private foundations, VAWC, for example, uses its own resources and direction. As mentioned earlier, accountability, funding and direction are vital to the sustained health of any movement, and VAWC has structured its development work based on co-op principles as method and mission.

VAWC uses a model where funds are decided upon and directed by co-ops themselves:

...which in turn creates:

The permanent link to this issue is http://geo.coop/node/631. 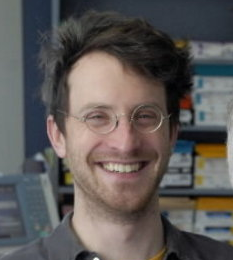 Adam Trott is the Staff Developer for the Valley Alliance of Worker Co-operatives, where he supports, develops and educates about and for worker cooperatives. Adam is also in his sixth year as a member of Collective Copies, a collectively-managed worker co-op and union shop offering full service printing and book-binding services from two locations in western Massachusetts  He serves on the board of the Co-operative Capital Fund and is an advisor to the Eastern Conference for Workplace Democracy.