Design Action Collective is a fun, creative, place to work. We provide graphic design and visual communications services to activist, social change and other progressive organizations. We believe that social-change messages need to communicate effectively with their target audiences.

Inkworks Press is an offset printshop that was established in 1973 by a group of activists who wanted to ensure "Freedom of the Press" - by owning one! Both shops are worker-owned and operated cooperatives. Both are unionized. We serve the same "client"-base and have a shared history. 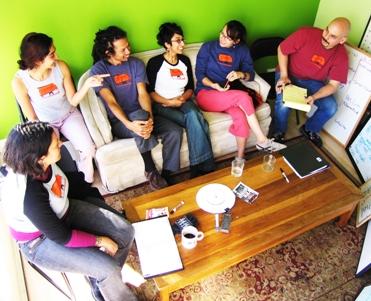 In 2003, after over a decade of offering both design and print services under the same roof, we decided to spin off Inkworks' design department into its own collective. Inkworks had been struggling for some time to reconcile its design and printing workflows due to the growth of the web, other new media, and the ever-increasing pace of print production shifting to capital intensive digital equipment. Two Inkworks collective members, Kym Thomas and I, left Inkworks to establish Design Action Collective in 2003. We agreed to send as much of our print work to Inkworks as possible. Inkworks agreed not to re-establish a competing design department. We started in the living room of my house, then moved to an in-law studio, and then to a shared office in downtown Oakland.

Inkworks' prepress department was able to focus its efforts on establishing its new Direct Digital workflow. This reduced waste, sped up turnaround times, and provided a broader range of affordable printing options. Now 5 years later, Design Action is a six-designer collective. We occupy a 2,100 square foot studio and we are expanding our design services to include a stronger communications strategy and messaging component.

Our key lesson is that "spinoffs" may be an effective strategy for growing the worker-cooperative movement, which has a number of advantages over trying to create a completely separate and new institution from scratch. Below, I describe some of these advantages and the lessons we learned from our experience spinning off a new worker cooperative.

Trade Experience
Trade experience is the biggest advantage we had in starting a new cooperative. Cooperative development people have often emphasized the importance of developing infrastructure support for new cooperatives that allow members to focus on what they know best - their trade. Even for those with an established product or service, figuring out how to deliver that product or service in a worker co-op model may require fundamental shifts. As a spinoff, we had the advantage of having clear ideas on how to provide our service effectively. All that was left was the joy of eliminating what did not work but was necessary in the "in-house" setting. 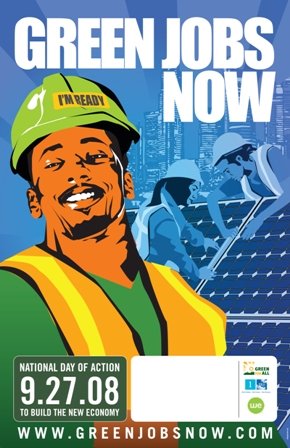 Leadership and Ownership Experience
Starting a new project or business requires some amount of "entrepreneurial spirit" combined with business acumen. Unless the parent co-op is hostile to new members, spinoffs provide avenues for personal development in leadership and business savvy that do not prevail in traditional business models. In Design Action's case, the founding members' combined experience at Inkworks (over a decade) proved to be a key asset. We were able to draw on the wisdom of our mentors as we charted new paths.

Template for Success
At Design Action, we spent considerably less time planning to launch our new business than worker co-ops starting from scratch.  In our spinoff, we were able to circumvent many unbillable hours that go into learning a trade, researching a business plan, developing policies and procedures that anticipate a broad range of scenarios, testing one's business instincts, and building a client base. We cloned, more or less, established policies as a baseline and then slowly revised them to fit our emerging needs. We created a space for subsequent members to establish a stronger sense of ownership through participation in the process of shaping our structures. Though the template was grounded in Inkworks' successful experience, the emerging collective also encountered less "founder ego" in reshaping it. We avoided flying blind and we were not locked into a rigid model we had spent too much time envisioning to reconsider. Best of all, all the while, we were up and running as a business.

Established Credibility
Establishing a business is about establishing relationships. Our startup costs were small enough that we were able to put them on a credit card, but had we needed actual startup capital, a parent organization would have been invaluable. But, even more important than access to capital for us was having established relationships with vendors, anchor clients, and even some of our "competition".

We were also able to approach our potential competitors as a "known entity" and fellow practitioners of the trade. It helped that we shared political goals with other folks doing similar work in the area. We started our second year by co-sponsoring a national gathering of like-minded people in our field. It was good to have established avenues for communication and cooperation from the start. There was enough work to go around (otherwise, we would have chosen a poor market to enter). Cooperation and solidarity with others in our trade has allowed us all to operate in a relatively low competition environment. Never underestimate the damage you can do to your own integrity and quality of service by operating from a place of scarcity and competitiveness! As one of my mentors always said: "Plan from a place of abundance." We were better able to embody this idea as a spinoff of Inkworks Press rather than as a couple of freelancers trying to establish a new co-op.

Replication
So far, we have few regrets about the manner by which Design Action was established. One could imagine an easier path. In the early days of Design Action, we all had to work long hours for low pay, and each growth step required extra work. Had we simply gathered together the full team of worker owners we have now and somehow found a way to capitalize the business for the first couple of years, perhaps we would be in the same place with fewer battle-scars. Yet at the time, this was not an option. We have tried to focus on the positive lessons from the spinoff model. Perhaps our model is not replicable where the goal is primarily large-scale job creation. Even still, cooperative job development might, in some cases, go further by investing in seeding spinoffs from existing cooperatives. Afterall, partnerships between existing cooperatives and co-op development organizations have been a key component in starting of a number of new co-ops in the San Francisco Bay Area... Arizmendi Bakeries in California, for instance, are replications of the Cheese Board Cooperative. The first Arizmendi Bakery started with on-the-job training on the days when the Cheese Board Cooperative was not open. (See article on Arizmendi Bakeries in this GEO issue.) Based on our experience, existing cooperatives should consider the spinoff model as a means to grow the cooperative movement.

Innosanto Nagara has been doing graphic design for activist groups and progressive organizations for over fifteen years. He is a long-time activist, and co-founded Design Action as a way to fully dedicate himself to making a concrete and sustainable contribution to the movement for social justice, doing what he does best.