An interesting conversation about Mondragon

A conversation between two commenters recently took place on the Reddit Cooperatives board about the Mondragon Cooperative Corporation (which I assume needs no introduction to anyone reading this blog). I found the conversation quite enlightening on a couple of fronts, and thought it was worth sharing with a wider audience than it probably enjoyed on it's original venue. I will present the conversation here by way of screenshots of the comment thread. The second commenter is a worker-owner at one of the Mondragon co-ops. 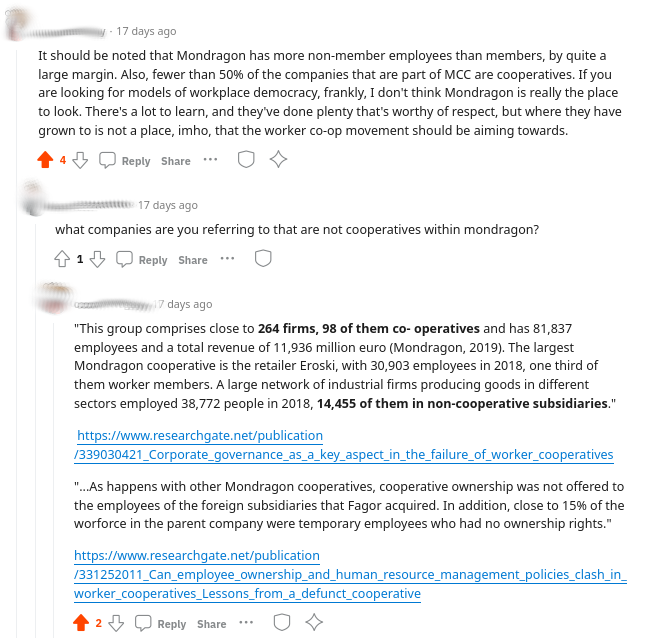 The two papers quoted here can be found here and here. 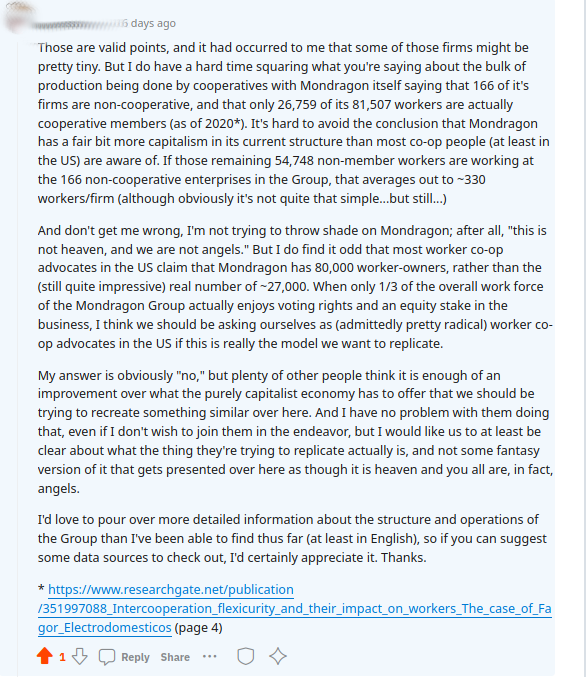 The paper cited can be found here. And for those who may not be familiar, the quote about Mondragon "not being heaven" is from Father Arizmendiarrieta. 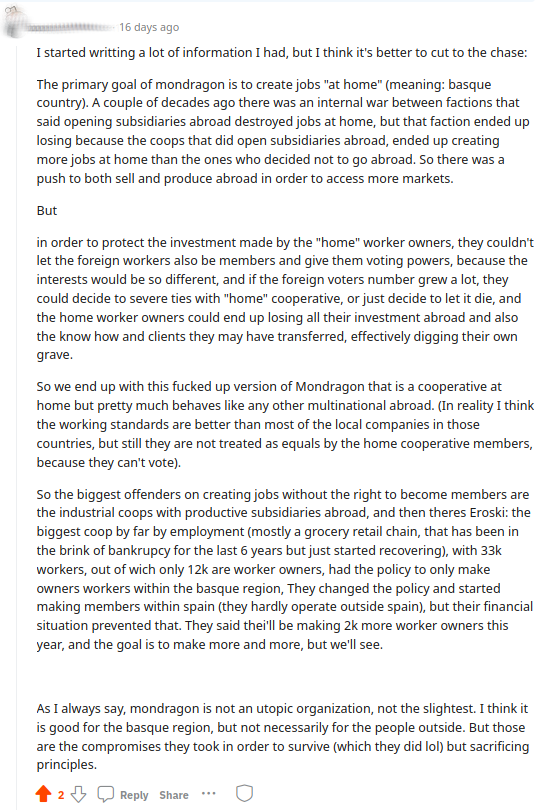 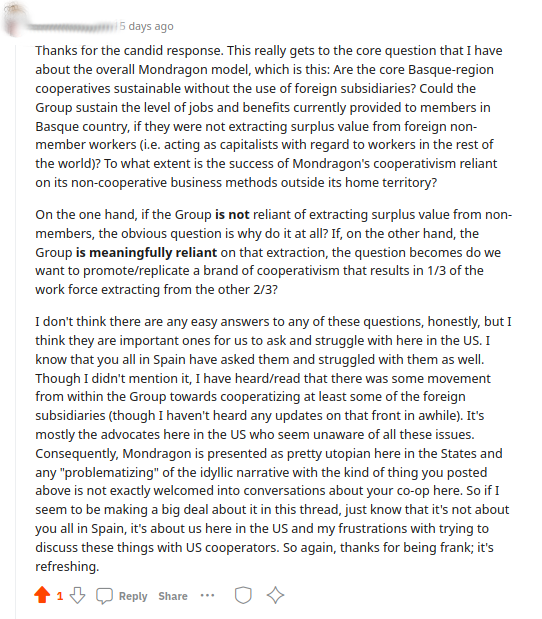 What stood out to me most, was that the conversation was direct without being antagonistic, which is something I often have a hard time doing, and which I think our movement is pretty poor at generally, in my opinion. And, of course, I also find the responses of the Mondragon worker-owner very interesting. It's obvious from his description of the internal discussions and decisions in the co-op, that there are many aspects of Mondragon that most worker co-op advocates in the US are largely or entirely unaware of. I know it came as a shock to me to discover that (at least as of 2019) only a third of Mondragon's 80,000 employees are also owners.

I hope others find this conversation as interesting as I did. I also hope that maybe a few more GEO readers (especially those of you with first-hand co-op experience) will occasionally drop by the r/Cooperatives board on Reddit. Currently there are far more inexperienced people with questions on there than people with the experience to able to answer them, so if cooperative education is your jam, r/Cooperatives is a pretty good place to practice that skill.

A very interesting and useful exchange, but I think some key points are missing or could do with further comment. ... In no particular order:
1) the claim was made that Fagor's (Fagor home appliances, as there a many Fagors) workers overseas were not offered membership. Sort of true, in a sense, but, in France, where the bulk of foreign employment was after the acquistion of Brandt (a French company), unions representing the workers were adamantly opposed to workers becoming members and the French plants becoming co-ops or part of the parent co-op (which suggests an important detour I won't take here about pretty widespread somewhat unenlightened and simplistic notions of worker ownership in Western labor unions). Also, a very substantial number of workers (a majority?) were over 50 years old and not interested in paying the 12-14K membership fee, when profits were an iffy proposition and the future was uncertain in the domestic appliance sector generally. Not sure what the case was in Italy or Poland where Fagor had other plants. Some union leaders in Poland were very critical of the co-op concept, but I don't know if they represented Fagor workers. It is not clear what Fagor's senior management or governing council felt about arranging co-op membership for French, Italian and Polish workers, but their first priority clearly was to ensure the plants were viable and not to get into a battle with French unions about it from Day 1. Some plants acquired by Mondra co-ops in Spain have been fully or partially "cooperativized" and it was certainly not impossible that there would have been interest on Fagor's part in doing something along those lines, once they had their business footing. Work cultures and labor relations evolve over time, but, first and foremost, clearly, a parent co-op cannot force foreign workers to become members. No systematic research has been done, but many anecdotes imply that many workers in foreign plants have little interest in becoming members... which opens the equally important question of how much cooperative enterprise education Mondragon co-ops have done and how WELL it has been done in their overseas plants... and how much thought has been given to how shared ownership arrangments might have to adapted to socioeconomic and legal conditions in a wide variety of countries. To be continued...

Thanks for the added context. There are obviously a number of factors at play here -- and I think that is largely the point of this conversation. While in the US, worker co-op advocates tend to paint a very neat, clean, and rather utopian picture of Mondragon, the reality is messy and far from utopian...and that's ok! But we need to be clear about what the situation actually is at Mondragon -- and how things have progressed and why -- if we're serious about learning from it. If we just take the Mondragon PR at face value, and don't look any deeper (which seems to be pretty common), we aren't going to be able to learn much because we'll be examining something that is (at least partially) an illusion.

When Fagor-Brandt came into existence, there was a lot of opposition from Brandt as a whole to the very idea that a cooperative would buy the French company out. The idea that Brandt would also become a cooperative was an absolute non-starter, for Brandt, not for FED. So, whatever else FED can be accused of (and after all, they failed the worker members through poor financial planning in a difficult economic climate), they can't be accused of somehow deliberately blocking cooperative membership to the French company. If we are talking principles (and I must say, I often find that critics of Mondragon are often painted as strong advocates of the principles), then we should remember that cooperative membership is free and voluntary. The issue of other cases of employment in Asia, for example, and the employee status abroad, while workers in Mondragon are members, is certainly valid, but this has never been denied by cooperative members in Mondragon. It is an open problem, and fully acknowledged. It is true that the reason for this is (1) the coop members in Mondragon prioritise their local members (2) in order to safeguard coop jobs at home, these coops are obliged to compete with capitalist companies who don't think twice about exploiting cheap labour and (3) the Mondragon coops claim (and although I don't know if this is true , I have no reason to disbelieve this) that employees abroad have considerably better pay and conditions than their counterparts in other companies. I think that the 'Mondragon critics' often adopt a 'holier than thou' attitude which ignores the realities of the market, ie the cooperatives have to exist in a capitalist framework. Anyone who has been to Mondragon will know that the first thing on the mind of the cooperative worker who has invested their own money in the cooperative is safeguarding the individual member's job and that of their community. From the Mondragon perspective it would make no sense to fail to compete abroad with capitalist companies if this were to lead to coop members in Mondragon losing their jobs, or the coop ultimately failing. I think that the utopian perspective often emerges precisely from people who don't know what it's like to manage huge cooperative operations such as the Mondragon project. It's easy to criticise if you are a member of a tiny coop in Europe or the US, because the major issues that the Mondragon cooperatives have to (and successfully) face don't exist for smaller non-industrial cooperative enterprises. Importantly, I really think it's unfair to suggest that cooperatives in Mondragon are not cooperative. Rather, they are as cooperative as possible in an uncooperative world.