A History of African American Cooperative Economic Thought and Practice 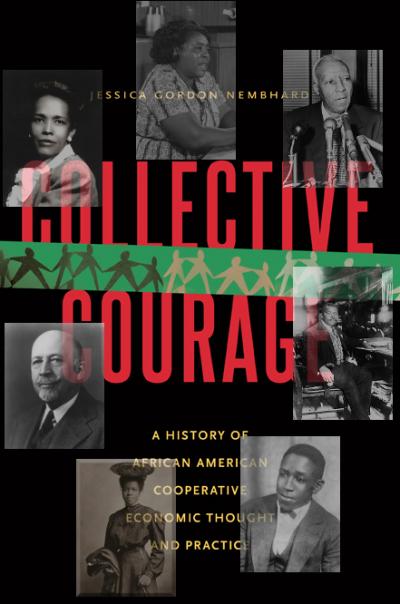 “The word ‘pathbreaking’ should not be used casually, but this is, in fact, a pathbreaking book. There is nothing like it. Jessica Gordon Nembhard’s study of Black cooperatives opens a door on a critical aspect of Black history in general and cooperative history in particular" ~ Gar Alperovtz, Lionel R. Bauman Professor of Political Economy, University of Maryland

“Jessica Gordon Nembhard's excellent book provides a refreshing antidote to the straitjacket on our imagination of better ways to organize our economic lives. Our economic lives can be both just and productive. Gordon Nembhard cogently demonstrates that black cooperative models offer a non-utopian route toward meeting both goals.” ~ William Darity Jr., Duke University

Interview with Vernon Oakes on the Everything Co-ops radio show.

Read the transcript at Truthout

Du Bois’ position was that African Americans were discriminated against economically, that we were trying to become capitalists and gain individual wealth just like other Americans, however it wasn’t working because of racism and discrimination. He said that we should voluntarily form a group economy based on a sense of solidarity and use producer and consumer cooperatives to position ourselves to serve our economic needs separately from the white economy. This way we could control our own goods and services and gain income and wealth - stabilize ourselves and our communities. Then if we wanted to join the mainstream economy, we could join from a position of strength.

Southern pews and pulpits weren’t the only source of people power during the long civil rights movement. So, too, were cooperative economic enterprises. These worker or consumer-owned alternatives to U.S. capitalism helped train and produce civil rights leaders from A. Philip Randolph to Ella Baker and Fannie Lou Hamer to sitting congressman John Lewis (D-Ga.). That historical link, between the civil rights fight and alternative economic self-help, is just one of the surprising nuggets unearthed by economist and community economic development expert Jessica Gordon Nembhard...

Mira: Why did African-Americans first start getting involved in cooperative economic activity? Was it for political or practical reasons or both?

Dr. Gordon Nembhard: African Americans started using cooperative economics from the moment they were forcibly brought to the Americas from Africa, at first for practical reasons. They realized that their survival depended on working together and sharing resources. They had collective traditions from the African nations and civilizations they came from, that they applied in the Americas when they could.

Scholars of cooperative topics are praising a new book about the history of African Americans and their involvement in cooperatives: Collective Courage: A History of African-American Cooperative Economic Thought and Practice, by Jessica Gordon-Nembhard, a faculty member at John Jay College, City University of New York. Gar Alperovitz, James Stewart, the late Ian MacPherson and Patrick Mason are among those who have endorsed the work, calling it “path-breaking,” “refreshing” and “the most complete history to date of the cooperative economic struggles of African Americans.”

At least one reviewer suggests it is of equal stature to W.E.B Dubois’ luminary publication, Economic Co-operation Among Negro Americans. The work is all the more remarkable given that the author draws not only from newspapers, magazines journal articles and biographies, but also from such difficult-to-access documents as budget and income statements, and cooperators’ letters, papers and memoirs.

Gordon Nembhard, a political economist by training, took up the historian’s trade and delved into archives and tracked down original sources to uncover the untold story of Black economic self-help. This was not the path she expected to take after her research convinced her that if communities organized cooperatives they would both create and retain local wealth. That realization led her to explore African Americans’ historic involvement with cooperatives. The problem, though, was that there wasn’t a history to turn to. Its place on the library shelf was vacant. She had to write the book.

And write it she did. It took ten years of tracking down sources only partially revealed in writings by W.E. B. Dubois, the Black intellectual, Ella Baker, the renowned organizer, A. Philip Randolph, the labor leader, and many others who appeared faintly until new lines of inquiry surfaced and clarified their role. Some of the difficulty writing this history, as Gordon Nembhard says, was due to the fact that many informants felt it was a history of failure. And there were failures. But also incredible resilience and vision.

Again and again, on almost every page, we are provided with detailed cases of worker, consumer, producer, and housing co-ops, of intentional communities, and a wide range of what are now called support organizations (credit unions, community funds, etc.) that helped build initial capacity and provided needed resources for sustainability. Very, very few of these were familiar to me, though I have been writing and teaching about, as well as advocating for, cooperative and workplace democracy for over 40 years.

One of my favorite examples in Collective Courage is the Cooperative Workers of America, a 19th century initiative in South Carolina which started “cooperative stores and a free cooperative school system, and addressed issues of wages, working conditions, and electoral reform”. As was typical within African American cooperative initiatives, “women were admitted with equal status as men”. A host of others are showcased in chapter 4, which reveals how “study circles” and multiple forms of peer-based education were – and are still being – used by African Americans to gather the emotional energy and intellectual acumen needed to start and sustain cooperative enterprises.

Purchase your copy of Collective Courage from PSU Press