(Editor's Note: Steven Dawson was president and founding director of the Industrial Cooperative Association (now the ICA Group) from 1978 through 1988. He is currently president of the Paraprofessional Healthcare Institute (PHI), the nonprofit affiliate of the 1600-employee Cooperative Home Care Associates - the largest worker cooperative in the U.S.
(The following excerpts from an article written by Steve Dawson were read to the assembled participants of last year's ECWD conference in Pittsburgh. The speaker added that, 20 years after he wrote, Steve's criterion had indeed been fulfilled, that the national community of worker owners was indeed speaking for itself and that its leaders were primarily based in their own profitable and democratically controlled firms. Needless to say, this generated a standing ovation, not really for the speaker, but for the assembly itself and our larger movement. We are indeed "out of the shallows.")

"...after ten years of work, I believe we have mastered much of the science of business - though still too little of the art.....We have even waded in the shallows, but I believe we have not yet dived deeply, to make business our medium.

"[Our] vision is not simply a narrow allegiance to a one-person/one vote structure, but a wider understanding that business, even in a market economy, can be a progressive vehicle binding people together...a powerful tool for social change in America.

"Though we share this vision, we still stand on the outside of the business world looking in. Too many of worker ownership's leaders are consultants, teachers, financiers, and grantsmen, and too few are managers and entrepreneurs of major businesses. We will know when democratic ownership has come of age - when the leaders, writers and spokespersons for democratic ownership speak primarily from inside their own profitable democratic firms."

-- Steve Dawson in "Out of the Shallows: A Strategy for the Worker Cooperative Movement," Spring, 1989 issue of Changing Work, the publication from which the GEO Newsletter emerged in 1991. 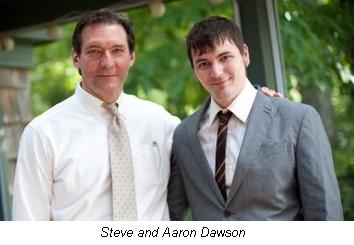 As I read through my father's reflections on his work in the worker co-op development world in the decade spanning 1979 to 1989, I was struck by many things. First, there were the facts that as he had worked in the world of worker co-op development, I now work in a worker owned co-op (Equal Exchange); moreover, he has, through the years, helped me develop (both the organization and myself). I was also struck by this statement he wrote back in 1979, which was read to the entire gathering in Pittsburgh Eastern Co-op Conference: "We will know when democratic ownership has come of age - when the leaders, writers and spokespersons for democratic ownership speak primarily from inside their own profitable, democratic firms." This really impressed me, as I am a worker in a profitable, democratic firm who sits on the board of the U.S. Federation of Worker Co-ops, which I feel in some way is a step in the direction of his vision. Similarly, his comment that worker co-op development will rely on the strength of technical assistance and development groups also resonates, as I sit on a seedling group working on developing a peer technical assistance group primarily made up of workers from democratic firms, which will only help to strengthen the patchwork of technical assistance groups.

There was also his use of Mondragon as an example of successful workplace democracy ("hesitantly, though, due to what I believe is the overuse of this example by our movement"), as I am about to visit Mondragon with my Masters in Co-operative Management course. I was also struck by his statement that groups learn about acceptable behavior through their leaders,  I, as a manager, have always tried to lead by example. Finally, I was struck to hear him state, "Of course, you should never listen to a manager about how democratic his or her workplace is..." I have said this many times, not knowing he had written it 20 years earlier.

So in reading his reflections, I came up with a few of my own:

When citing this article, please use the following format: Aaron Dawson (2010). Worker Ownership, Coming of Age and Out of the Shallows, Grassroots Economic Organizing (GEO) Newsletter, Volume II, Issue 5, http://www.geo.coop/node/441