Tuesday November 3 marked a milestone for the book project of the Valley Alliance of Worker Cooperatives (VAWC).  Food for Thought Books, a 33-year collective and member of VAWC, hosted an advance book sale for CO-OP VALLEY! THE WORKER COOPERATIVE MOVEMENT IN THE CONNECTICUT RIVER VALLEY.  They organized the event to help finance the writing and publishing of the book. 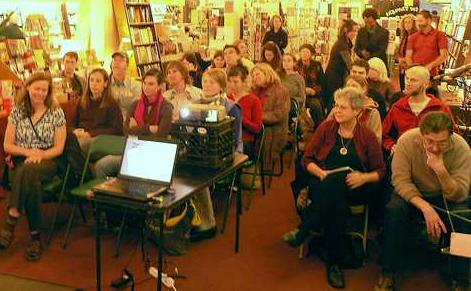 Our purpose in publishing this book is three-fold:

Here is the provisional table of contents:

VAWC started in the fall of 2005 with the goal of organizing worker-owner cooperatives in the Pioneer Valley of western Massachusetts and southern Vermont.  Our first goal was to expand our informal support network into a strong network of face-to-face relationships. Members of three worker cooperatives called a meeting which ten people attended: representatives from several worker and consumer cooperatives as well as some educators. We drafted the basic elements of our vision in that meeting, and formed VAWC shortly afterwards.

Now, four years later, about fifteen individuals participate in our monthly meetings, all the individual members of the various co-operatives understand the basics of VAWC, a book project is underway, and we have one part-time staff person.  The representatives from the member cooperatives serve as VAWC's steering committee.  Active participants also include representatives from a local research group, cooperative developers, educators, student-run and volunteer collectives as well as interested individuals.

Three organizations are represented as well:

CO-OP VALLEY! is our first major outreach effort. We believe it will be a significant step in building the organization we need to pursue our mission effectively. Specifically, we are seeking to broaden and deepen the awareness, appreciation, involvement, and support for VAWC as a development organization among 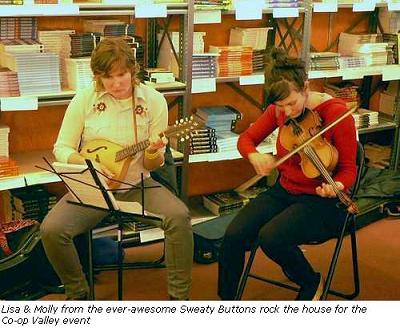 In addition, the book may help us gain awareness and support from the national and international worker cooperative movements as well as help recruit new cooperators to the movement.

Our second big project started about six months ago with the commitment of significant resources to a staff position.  This is a big step toward active development of worker co-operation in our region.  It is a one-year pilot project in evolving an organizational structure for providing support for

Our three basic goals for the project: 1) To engage with co-ops and their members to better understand their needs and goals, 2) to begin some basic activities with demonstrated impact such as joint marketing, education and community outreach, and 3) to work with member co-ops to outline the responsibilities and funding for a long-term staff position

A CO-OP VALLEY! subcommittee of VAWC is collectively writing and editing the book, and Collective Copies will publish it.  Two worker-owners from Collective Copies and three members of CERG serve on that team pr bono.  The illustrator member of our writing team will leaven the book with humorous illustrations; stories of personal transformation from the interviews will give it an inspirational feel.

Specifically, we are conducting, recording, transcribing, and processing extensive interviews with

Recently we secured $2,500 to help cover the special expenses associated with conducting and transcribing interviews that provide much of the raw material for the book.  Also, we have raised almost $1,000 in informal advance sales.  We are looking to raise another $11,000.  We invite you to share in the project by making an advance purchase.  If you are interested in supporting the project, use the form in the sidebar.

The interviews in and of themselves are vital to building a community of support as they generate awareness and interest of what VAWC is doing and how it is evolving. We will archive all of the interviews and transcripts in the online library of the US Federation of Worker Cooperatives, and possibly at one or more of the universities in the area.

Our vision for the future

Up until a year ago our activities focused on educational outreach, support of our member cooperatives, and mentoring of new ones. Our educational work has included presentations at local high schools, colleges, and universities. Several community organizations in the Valley have also invited us to their cities to present the worker cooperative model.

We expect to produce a three-to-five year plan for VAWC's development out of the book and staff position projects. The work that is going into the writing of the book is already providing resources for that process. Creating a community of interest and support will also contribute to the making of such a plan.

What we are aiming for at this point is an the organization that can:

The cooperatives currently belonging to VAWC are: 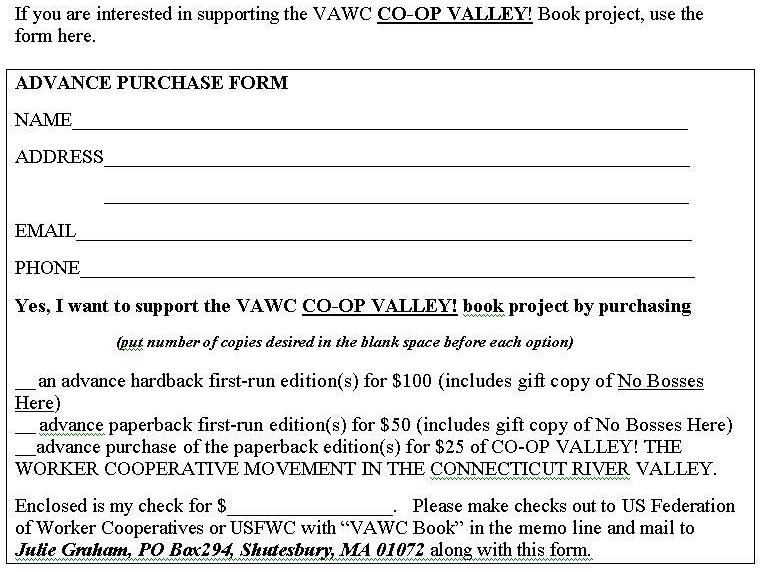