This article is provided strictly for informational purposes.  Should you have specific questions about the particular laws in your state, please consult an attorney admitted to practice in your jurisdiction.  Although the section briefly identifies some tax implications of various legal structures, it in no way intends to provide tax advice; for specific tax concerns please contact a professional tax adviser familiar with cooperatives.  Each legal structure has implications for various workplace laws; those legal issues are outside the scope of this article and we recommend consulting with an expert. Until a worker co-op forms a legal entity, every worker owner will be personally liable for any co-op debt or obligation, and individual worker owners' personal signatures will be required for contracts, bank accounts, etc.  So it is generally safer and more efficient for a worker co-op to form itself as a legal entity as it begins to engage in substantial business.

Introduction to the Project
We are preparing a legal guide to worker co-ops in response to requests from worker centers and community-based organizations in predominantly low-wage, immigrant communities.  The Guide is being developed by Urban Justice Center, National Employment Law Project, and Fordham University School of Law Community Economic Development Clinic. Our offices represent low-wage workers and have developed expertise concerning worker co-ops in low-wage immigrant neighborhoods mostly in New York City.

The Guide will profile successful and struggling worker co-ops striving to bring increased income, dignity, and control over working conditions to low-wage, vulnerable, and immigrant workers.  In addition, the Guide will analyze important considerations to evaluate when forming a worker co-op.  It will include extensive annotated resource bibliographies.  We excerpt here the section of the Guide addressing legal entity options for worker co-op formation.

We welcome comments, questions or suggestions about this section and our larger project.  This section is a work in progress based on our New York experience plus initial research and discussion regarding other parts of the country.  Please tell us more about law and practice in your area.  Email feedback to edebarbieri@urbanjustice.org.

Introduction to Legal Entity Options for Worker Co-ops
Each state's laws provide for certain general forms of legal entity, and some states offer additional options.  Each entity form imposes requirements on the organization structure, responsibilities of the members to each other, to the cooperative and to the outside world.  Factors to consider in determining whether to form a legal entity, at what stage to form it, and which entity structure is most appropriate include: (1) the type of industry (2) sources of capital and finance and how much control individuals or entities providing capital require; (3) structural flexibility, especially if  a nonprofit organization wants to retain a role in governing a worker co-op that it formed and incubated; (4) tax consequences; (5) immigration law consequences; (6) how important it is to use the words "cooperative" or "co-op" in the entity's legal name; and (7) the group's capacity to comply with tax and other filing requirements imposed on various types of legal entities; and (8) any other state specific considerations that might arise.  Until a worker co-op forms a legal entity, every worker owner will be personally liable for any co-op debt or obligation, and individual worker owners' personal signatures will be required for contracts, bank accounts, etc.  So it is generally safer and more efficient for a worker co-op to form itself as a legal entity as it begins to engage in substantial business.

Depending on the laws of the state, or states, where the cooperative is operating, more or fewer options may be available.  This section discusses two major  types of legal entity options that are  available to worker co-ops:  the Limited Liability Company (LLC) and the Worker Cooperative Corporation.  For each type of entity we discuss its governance structure, form of payment to workers and tax treatment.   In the full Guide we will also discuss a third option, the general Business Corporation.  We would appreciate learning about the experience of worker co-ops and their attorneys that have used this option (or any other option we may have overlooked).

Limited Liability Company (LLC)
This is a relatively new form, introduced throughout the U.S. in the early 1990s.  State registration and filing requirements for LLCs are usually minimal in comparison with the requirements imposed on corporations.  The LLC provides the benefits of limited liability similar to a corporation, while providing favorable tax treatment.

Worker Coops in many states, including Massachusetts, California, and New York, have used the LLC to form successful worker co-op ventures.  LLCs use a system of internal capital accounts which can be readily adapted to establish a patronage and accounting system that follows the traditional model established by the Mondragon co-ops in northeastern Spain.  Some states that have special co-op corporation laws do not allow an LLC to use "co-op" or "cooperative" in its official legal name even though the LLC is organized and operated according to co-op principles.

Limited Liability
The concept of limited liability means that the personal liability of an individual involved in a legal entity (for debts, obligations, damages, etc.) is limited to the amount of money that individual invested in the entity. For instance, if each member of an organization with limited liability contributes $500, and the organization is unsuccessful, each member only loses her $500. She cannot be held responsible for any additional debts the LLC incurs.

LLC: Governance
The laws allow great flexibility in the governance structure of an LLC.  Workers and others can form an LLC by filing simple Articles of Organization with the state government and creating and signing an "Operating Agreement" which determines the co-op's governance and financial arrangements.  The operating agreement is a contract among the members of the LLC, including worker-owners and any investors or incubating and sponsoring groups that will be part of the co-op.  There are no legal limits on which individuals or types of organizations can be LLC members.

Decision making can be set up in any way the members want.  They can create a board of directors, or all members can make decisions together.  It is important to clarify who can act on behalf of the LLC.  If there is no board, and all members make decisions as a group, each member has the legal power to bind the entity unless expressly restricted in the LLC Operating Agreement.

In an LLC there is no legal requirement that voting power be linked to capital investment, profit share or any other financial factor.  For example, investors can be re-paid through a large initial share of profits while worker-owners hold a majority of seats on the board of directors.  Or an incubating group which takes no profit share could have a board seat and veto powers to make sure the co-op remains cooperative and serves the broader community and the goals which led the incubator group to help form the co-op.

LLC: Distribution of Income to Worker-Owners
In some LLC worker co-ops, the worker-owner members are paid wages and benefits as employees and also receive a share of profits as co-owners.  Alternatively, some LLC worker co-ops have found it advantageous to have no employees.  Worker-owners are co-owners only.  They receive only a share of profits, no wages.  The LLC gives each worker-owner a weekly or bi-weekly advance against projected annual net profits, adjusted at the end of the fiscal year.  (In an LLC worker owners are not protected by workplace laws that cover "employees," such as wage and hour laws, unemployment insurance, and workers compensation.  Also, the LLC does not withhold and remit income taxes from the worker's pay, as an employer does, and the worker is responsible for paying the full amount of social security and Medicare taxes, which are shared evenly by an employer and employee in a traditional employment relationship.)

Worker co-op corporation laws require adherence to basic cooperative principles, such as equal voting independent of capital invested.  Each worker owner purchases a single share (by lump sum payment, a loan which is paid off over time, or through her labor - sometimes called "sweat equity").  Worker co-op corporation laws permit internal capital accounting and distribution of earnings based on patronage (hours worked or wages earned).  They require the use of the word "cooperative" or "co-op" in the corporation's legal name.

Marketing & Referral Worker Co-op Models
Workers involved in service industries, such as cleaning, childcare, or other maintenance or domestic work, may form nonprofit marketing and referral cooperatives to support their work. In this kind of arrangement, the cooperative functions as a means for members to pool their resources for marketing the services that each member provides individually. The cooperative could also provide support and training to members. Since such cooperatives are not designed to earn and distribute profits, they may form as non-profit corporations under a state's general cooperative corporation laws. These types of co-ops are formed and governed like other non-profit corporations.

Marketing and referral cooperatives are taxed as corporations. While ineligible for tax exemption under Section 501(c)(3) of the Internal Revenue Code (since their activities are not exclusively charitable and educational), they might qualify under Sections 501(c)(4) or 501(c)(6), which protect co-op income from federal income tax but do not allow donors to take tax deductions for their contributions.

Worker Cooperative Corporation: Governance
Each worker owner owns and votes a single share.  Shareholders elect a Board of Directors which may hire managers accountable to the Board.  No non-worker can hold a voting share.  In order to raise capital, some worker co-op corporations issue shares with no voting rights (except over changes in the treatment of those non-voting shares).  These "preferred shares" have priority in dividend payments but receive only a fixed rate of return.  This finance system is consistent with cooperative principles since governance remains based on one voting share per worker owner.

Worker Cooperative Corporation: Distribution of Income to Worker-Owners
Worker-owners are generally paid wages as employees and, in addition, some corporate income is distributed to each worker as a dividend based on patronage. Un-distributed corporate earnings are added to each worker's internal capital account (in proportion to patronage) and any losses are deducted from those accounts.  To raise money to invest in new equipment or other capital expenditures, the co-op can borrow from internal capital accounts instead of taking out a loan and paying a high rate of interest. (Worker co-op corporation laws also allow retention of some earnings in a collective internal account to be used for capital expenditures.)

Internal capital accounts are paid out to worker owners every few years, with modest interest.  For the complete Guide, we plan to look into whether a worker co-op corporation can, like an LLC, be set up so that the workers are not employees, but only owners who receive in place of wages a weekly or bi-weekly advance against projected patronage dividends.

Summary
The Table below summarizes the major differences between the Limited Liability Company and the Worker Cooperative Corporation structures for worker cooperatives. 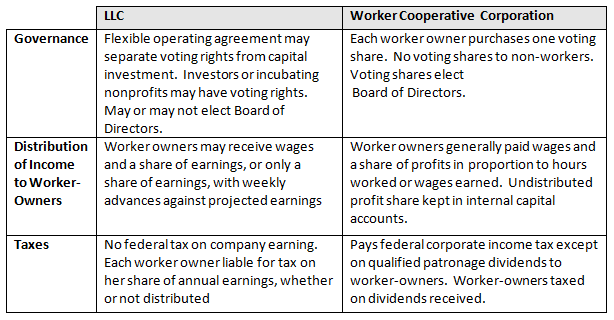 This Guide is being developed by Urban Justice Center, National Employment Law Project, and Fordham University School of Law Community Economic Development Clinic.  This Guide would not be possible without Sarah Leberstein, Staff Attorney at National Employment Law Project, Gowri J. Krishna, Clinical Teaching Fellow at Fordham University School of Law, who both contributed to early drafts of this article, and numerous Fordham law students.

The permanent link to this issue is http://geo.coop/node/628. 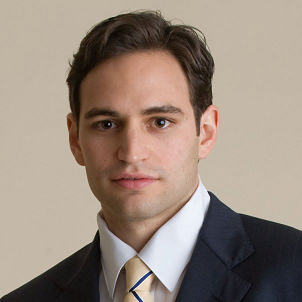 Is there a textbook on how to start, manage and maintain worker-owned co-ops? It would be interesting to read at length how it applies to all the business functions.

Cooperatives and the Black Community