Permanent link to this article:  http://geo.coop/node/443

[EDITOR'S NOTE: This article begins a two-part series profiling Cooperative Home Care Associates efforts to provide worker-owners with a meaningful participation in a  large cooperative. Twenty-five years old, CHCA was the first worker-owned home care cooperative in the U.S. and is currently the largest worker co-op in the country.  This first piece describes six opportunities that CHCA has developed for home care workers to learn the skills needed to participate, effectively, in organizational decision-making. A second article will examine the dynamics of a labor union representing CHCA's worker-owners - which is very timely, in light of the new Mondragon-US Steelworkers initiative. Finally, we will reference the experiences of CHCA in an article focusing more broadly on the experiences of worker-cooperatives in empowering low-income individuals to successfully fulfill their ownership responsibilities.]

After having spent nearly a year searching for work, Kim Alleyne - an immigrant from Guyana - first learned about Cooperative Home Care Associates (CHCA) from BronxWorks, an organization that helps Bronx residents to become more financially self-sufficient. She attended and graduated from our four-week home health aide training program, and was employed as a home health aide at CHCA, in July 2008. Ms. Alleyne decided to become a worker-owner in May 2009, nearly a year after working at CHCA. In September, one of Ms. Alleyne's coworkers nominated her as a candidate for CHCA's Board of Directors. After accepting this nomination, she received the second-higher number of votes in our 2009 election for Board positions. 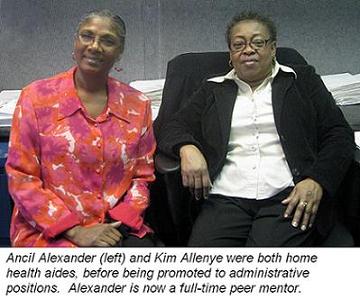 CHCA is a home care agency, based in the South Bronx and licensed by the New York State Department of Health. We employ nearly 1,700 home care workers, including 95 administrative staff members - most of whom are either African-American or Latina. CHCA consistently acts on the belief that low-income individuals can fulfill specific responsibilities that contribute significantly to the success of a worker-cooperative. We also exemplify the success of a worker-cooperative in economically empowering low-income New Yorkers, by implementing many innovative strategies and practices that improve the quality of jobs held by our 1,600 home care workers.

We also act on a strong belief that - with effective guidance, management, and participatory training - home care workers can meaningfully participate in organizational decision-making at CHCA. For example, through their conversations with peers, clients, and other administrative staff members, worker-owners can discuss new ideas for improving key facets of our operations.

By transforming part-time home care jobs into full-time positions, CHCA differentiates itself from other firms in New York City's home care industry. Specifically, we invest significant capacity in scheduling our home care workers for at least 30 hours each week. Additionally, we guarantee that home care workers who have been employed by CHCA for three years receive pay for working 30 hours each week - if they do not refuse any client-assignment. Through this Guaranteed Hours program, we also created a group of home care workers willing to support clients: early in the morning, late at night, or who have complex care needs.

We also allocate 80 percent of our total revenue to the wage and fringe benefits costs of our home care workers - including a comprehensive health and dental insurance benefit that does not require a financial contribution from employees.  We also offer our home care workers:

Additionally, we provide our home care workers with many opportunities to accumulate assets, including:

As an alternative to predatory payday loans, CHCA offers no-interest loans that average $250. We also encourage workers to create savings and checking accounts, instead of relying on expensive check cashing services.

Although, given our size, all worker-owners cannot be present when most decisions are made within CHCA, we have created six opportunities for those interested to provide their feedback and opinions about key issues - through which they meaningfully impact organizational decision-making within the cooperative:

Each quarter, we invite all employees to Regional Meetings where they learn about CHCA's finances and key trends within New York City's home care industry.  We pay home care workers at their regular hourly salary for attending these two-hour meetings. Through this work, we help home care workers understand the key information required to make effective decisions about our business, as worker-owners. 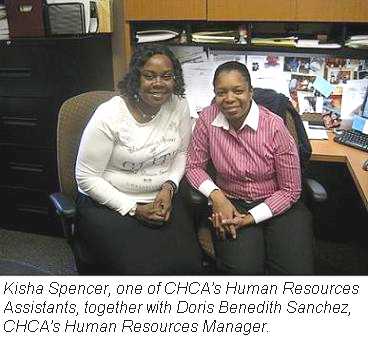 After serving on our Board of Directors, worker-owners can be nominated again for a second two-year term. Although CHCA does not enforce any formal term limits on our Board, no current member has served for longer than four years.

Unsuccessful candidates for our Board of Directors are typically appointed by CHCA to positions on our Worker Council, comprised of 12 home care workers who help communicate information to their peers about new policies and key financial decisions. Specifically, the Worker Council members serve as a resource to help our home care workers understand key decisions made by our managers and share feedback from their conversations with home care workers to other administrative staff members. Through this effort, Worker Council members learn the skills needed to advocate effectively on behalf of peers and communicate their concerns to others in the organization.

In 2003, 1199SEIU - one of the largest labor unions in New York State - organized CHCA's home care workers. In 2007, CHCA and 1199SEIU began discussions that resulted in the creation of a joint Labor/Management Committee.  This provides home care workers with another opportunity to collaborate with administrative staff members, managers, and union organizers in improving key facets of our operations.

Notably, due to the success of our Labor Management Committee, CHCA received the 2009 Innovations in Employee Ownership Award from the National Center for Employee Ownership and Beyster Institute. The Federal Mediation and Conciliation Service - an agency of United States government, which handles arbitration and mediation of labor disputes and contract negotiations - also awarded CHCA an 18-month, $65,000 grant to double the size of our Labor/Management Committee. 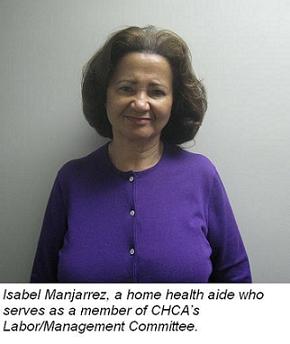 Before joining CHCA in 1998, Zaida Ramos completed a class at Hostos Community College where she learned about the role of labor unions in empowering members of minority communities. Therefore, in one of her first meetings with CHCA's Chief Financial Officer, she asked whether we were unionized. Our CFO at the time replied that since CHCA was a worker-cooperative, our home care workers did not need a union. Yet several years later, after analyzing the benefits of unionization, Michael Elsas (CHCA's President) initiated discussions with 1199SEIU to explore the possibility of having them represent our home care workers - which culminated in their decision to unionize in 2002.

One notable success of our union delegates occurred in 2009, when CHCA distributed free cell phones to 1,211 home health aides for use in their work - but also required a $40 deposit to cover the cost of lost or stolen phones. In a scheduled meeting with Mr. Elsas, our union delegates shared complaints by home care workers about this deposit requirement. In response, he amended this policy, so home care workers paid $40 only if their cell phone was lost or stolen.

All worker-owners have a vote in ratifying CHCA's allocation of net profit into four key areas:

For the past few years, CHCA's worker-owners have approved allocating 50 percent of our net profit to retained earnings. While reducing the amount of money available for distribution as dividends, this decision has significantly strengthened CHCA's finances.

Additionally, in 2004, worker-owners approved a recommendation by CHCA's President and Chief Financial Officer to contribute to the 401(k) accounts of all employees - using a percent of CHCA's annual profit, which also reduced the total amount of money paid as dividends only to worker-owners.  Through this decision, home care workers recognized the importance of increasing participation in CHCA's 401(k) plan to help attract and retain individuals who were the most committed to providing quality care for clients.

Stu Schneider has served as Business Development Manager of Cooperative Home Care Associates (CHCA) since March 2009 - after supporting its work for eight years, as workforce development specialist at Paraprofessional Healthcare Institute, an affiliated non-profit organization that advocates and develops policy to create a stable workforce. Mr. Schneider helped to double PHI's annual revenues and increased CHCA's revenue by nearly 25 percent. At CHCA, he also works to increase worker-ownership and employee-participation among home care workers. He has a B.A. from Rutgers College in Economics and Urban Studies.  He can be reached at sschneider@chcany.org.