Cooperative Finance in Haiti and Grenada

Last year, University of Toronto professor Dr. Caroline Shenaz Hossein published an article in the National Review of Black Politics entitled, The Legacy of Cooperatives among the African Diaspora: The Cases of Haiti and Grenada. In it, Hossein reports on 138 interviews of Grenadians and Haitians she carried out between 2008 and 2013. The interviews focused on people’s preference for cooperative lenders, how co-ops developed on the islands, and the relevance of informal cooperative banks in people’s lives.

The plethora of cooperatives on these two islands is the result of several historical and social factors, as Hossein writes:

Haiti and Grenada stand out in terms of their historical inclination for cooperatives. A significant number of citizens on both islands rely on credit unions and other financial cooperatives to organize their society and businesses in ways that prioritize the needs of human beings.

Both islands gained independence over a hundred years apart. Yet their political and economic history is worth comparing and may explain each country’s attachment to cooperatives. Both countries experienced slavery and colonization by white Europeans as well as US occupation, and they both experienced revolutions.

In these two countries, the legacy of slavery, colonization, and American occupation has institutionalized structural practices of exclusion and marginalization of people of African descent throughout the entire financial ecosystem. This has pushed ordinary people to rethink the kind of economies they want. People have had to make conscious decisions to engage in member-owned collectives/group economics to counter the exclusionary practices of formal commercial banking institutions (Hossein 2016). They also join these groups to resist the economic logic of an imperialistic banking system that excludes Black and racialized individuals because they supposedly lack creditworthiness.

Hossein points out that the use of cooperatives by Grenadians and Haitians is nothing new. Members of the African diaspora brought cooperative traditions with them to the Americas, and have continued to employ them ever since.

Morgan State historian Maurice St. Pierre (1999) found that enslaved African Guyanese people created buying clubs as a way to mobilize savings to buy freedom and later used these clubs to buy farms so that Blacks could limit their work with the racist planters. The roots of cooperatives in both countries are traced to an African legacy: enslaved people brought traditions of alternative economies based on collective organizing to the Americas. Robin Kelley (2002) reminds us that the Quilombolas and maroon societies were created by Black people who refused to be enslaved and built up their own cooperative systems while in hiding. In this regard, people in the African diaspora have created cooperatives in inhospitable environments for centuries. African traditions of collectives reveal that Black people have a long cooperative history of helping people thrive in commerce, including during the times of slavery and colonization when they were oppressed, subjugated, and excluded from formal banking institutions.

As Hossein details, The Rochdale Pioneers were far from the first people to organize cooperative institutions to protect themselves from unethical and uncaring capitalist businesses (despite the claims of many cooperative histories).

The history of cooperatives often begins with the Eurocentric story of the Rochdale weavers in Lancashire, England, in 1844 (Hossein 2020; ICA 2016; Fairbairn 1994). Historical accounts of credit unions also typically focus on Europe, specifically Germany, where in 1849 the lawyer Hermann Schulze-Delitzsch formed the Raifeissen credit union to help working-class people avoid loan sharks (Guinnane 2001). In the Americas, historians attribute the cooperative movement to Alfonse and Dorimene Desjardins, who brought credit unions to Lévis, Québec, in the early 1900s to reach the Catholic and French-speaking minority in Canada (MacPherson 2012).

These starting points, however, ignore the fact that African descendants in the Americas also had cooperative banks. They took the form of informally organized mutual aid groups known as rotating savings and credit associations (ROSCAs), such as Susu and Sol. These financial models were brought to the Americas by enslaved people, predating the European beginnings...the development of credit unions and self-help groups was deeply rooted in African traditions and non-white spaces even before they were named (Hossein 2015, 2018).

African people everywhere use cooperative systems to meet their needs in various ways. Throughout the Caribbean, these cooperatives are locally known by many names, such as Susu, Sol, Partner, Meeting-turn, and Box-hand. These are long-standing traditions that historically took a bold stand against the pressure to take on debt. The ROSCAs in Grenada and Haiti have been instrumental in co-op development in the region and are the mainstay financial cooperative of women.

And while European colonizers may have introduced some cooperative forms in some places, Africans in the Caribbean were already well familiarized with what we call today “the cooperative advantage.”

Cooperatives provide a way for people to be independent from corrupt leaders. The development literature tends to over credit colonizers for introducing cooperatives to colonies (Develtere 1993). While this may be the case in some countries, it is certainly not the case everywhere. And the literature misses that the African diaspora make a conscientious decision to formalize their own cooperatives and to continue their indigenous collectives (Hossein 2015). Some informal cooperatives remain outside the purview of any oppressor.

The cooperators I interviewed (n ¼ 62), and especially the women (n ¼ 53), were aware of this cooperative history and the legacy of group economics. I had to stop asking Black women whether co-ops were a colonial import because all of them refused to even consider this as a question.

Hossein then explains the basics of Haitian and Grenadian financial cooperatives:

The ROSCA is usually managed by a “Champion” or “Mama Sol” or “Banker Lady,” who sometimes has an executive to assist in managing the money. In the interviews with both users and experts (n ¼ 138), it was explained that members contribute a fixed sum of money at regular intervals into a pool over a predetermined period of time. The accumulated funds are collected at a meeting and the money is paid out to a member in turn on a weekly or monthly rotational basis until each member has received their “hand” or contribution.

ROSCAs sometimes require a small fee to be paid to the Banker Lady, but this is determined by the group’s membership. Generally, fees in a Sol are nominal, and there is no interest charged. Most Haitian members (38, n ¼ 45) complained about the high interest rates charged by mainstream banks, especially following the earthquake, when the per annum interest rates at these institutions increased from 16 to 40 percent. Because of these hurdles, one respondent, who works in a commercial bank, explained that small farmers and MSE operators usually turn to Sol...

These ROSCAs not only provide financial benefits, but also help to build trust among members, and provide spaces for social support.

Susu and Sol are organized in cycles and they function based on trust. The issue of trust was the primary reason people had participated in ROSCAs for decades. Since these money-organizing mechanisms are not based on legal contracts, new members of a ROSCA would likely be relegated to one of the last draws because they would not have built up a relationship of trust with the members. After participating in a number of cycles, trust is developed and the person’s position may be pushed forward based on their financial heath, determined by their timeliness in contributing to the pool.

Many cooperators, especially women, said they joined a ROSCA for the “social connection” and “sense of belonging.” Seventy percent of the women cooperators (38, n ¼ 53) referred to ROSCAs as a space they can go to and not worry about menfolk. ROSCAs give women a place to socialize and to discuss domestic and personal issues (Ardener and Burman 1996; Alabi, Alabi, and Akrobo 2007).

Membership in a Susu is a way to build up positive forms of active social capital because people could rely on each other, and not elites (Krishna 2002). All of the Grenadian cooperators (17) said Susu was a way people helped themselves and others. This finding matches those of Ardener and Burman (1996), who carried out studies in a dozen cases in which women confessed that at ROSCA meetings, they found social support and felt free to complain and seek advice about marital issues. Of the cooperators interviewed, 81 percent (50, n ¼ 62) attested to the fact that formal banks, whether cooperative or commercial, do not consider the social aspect that people want. Cooperators (n ¼ 62) explained to me in the interviews that they organized ROSCAs in familiar places, such as members’ homes or yards or church basements, so they could hold meetings and then eat together. 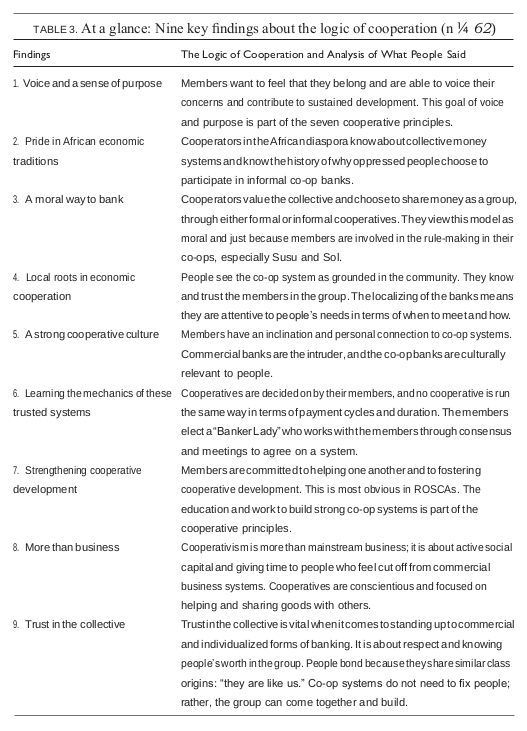 ROSCAs and credit unions also have another advantage over traditional lenders.

Almost all of the Haitian cooperators I interviewed (43,n ¼ 45) stated that the people managing the Sol and cooperatives “are like us”—meaning that the frontline staff came from the same economic backgrounds. On both islands, the credit unions sector is usually staffed by bankers with similar class origins to the people they work with and extend credit to.

This idea—“they are like us”—meant that most of the cooperators (42,n ¼ 45) found that staff would support them in their business affairs without any class or racial bias. In addition, cooperative lenders possess a race- and class-consciousness that reveal they understand the experiences of those on the receiving end (Hossein 2016).

And unlike at traditional banks, the emphasis in credit unions and ROSCAs is on growing savings and building assets, rather than loading customers with debt.

The members interviewed for this study(16, n ¼ 17) said they “trusted credit unions because of their social commitments.” “Jingle,” a business owner of a pizza and food shop, stated he was skeptical that state and banking elites help vendors:

Government and them [commercial banks] say they would help business in market and [bus] terminal. But they only talk, talk, and give no help to us. They fear we can’t pay. So, I don’t worry with [their] empty promises and I go to my Communal [refers to Communal credit union]. (interview, “Jingle,” St. George, Grenada, 13 June 2013)

“Jingle,” like other interviewees, prefers credit unions because they focus on savings and building assets rather than on debt.

The Haitian and Grenadian people are strongly influenced by the indigenous banking systems of Susu and Sol because of their focus on equity. Members pool goods, voice their opinions, and seek consensus, and these are all ways to show that business can be embedded in community. The Haiti and Grenada cases...show that ROSCAs, mutual aid, and cooperatives have been part of the survival of enslaved and colonized Black people in the Americas for a very long time.

Reflections on a Visit to Cuba’s Urban Cooperatives