Who Can You Trust to Cope With Climate Disasters?

An Interview Series with Keith McHenry

Keith: The ecological crisis seems to grow more dire every day. I live in Northern New Mexico and we had 70 inches of snow again this year. In the past the snow pack was over 200 inches filling our irrigation ditches into August, but once again the Acequias were already dry in mid-April.  Super-storm Sandy, floods in Southeast Asia, and many other extreme weather events indicate that we have already begun to experience the disastrous impacts of the climate crisis.

Len: In your New Orleans talk, you made the provocative observation that “anarchists and community activists have been at the center of providing relief during climate disasters and fighting the causes of global climate change.”  You also acknowledged that this may seem counter-intuitive. So can you explain it, and give us some examples?

Keith: Anarchism is a philosophy based on mutual aid and non-hierarchical arrangements in every area of social life; it also advocates the use of direct action, rather than reliance on elected officials, to disrupt policies that are leading to ecological collapse. Beyond this, anarchists are open to a holistic approach to these disasters, one that mimics the diversity of responses found in nature. To me, mutual aid, direct action, and this sort of openness to our natural environment are all crucial for coping with the increasingly desperate conditions that humanity and nature face today.

The stories about anarchist and local activist volunteers providing disaster relief would fill an entire book. The first time I became aware that Food Not Bombs might be in a position to respond effectively to a disaster was in 1989 when an earthquake hit the San Francisco Bay area. Our all-volunteer group was already sharing food at Civic Center Plaza, Peoples Park, and near the epicenter in Santa Cruz. Years later, it really became clear that we might be better positioned to respond when Hurricane Katrina flooded New Orleans. Volunteers from across America headed towards the Gulf Coast well before the storm came ashore.

Super Storm Sandy was no different. Food Not Bombs activists started to call our emergency toll free line even as Sandy was starting to batter the Caribbean. At the same time volunteers on Long Island, New York were also starting to prepare for Sandy, emailing out an announcement for their first planning meetings before the storm hit the United States. The newly formed Staten Island Food Not Bombs also called our hot line seeking support. Before long Food Not Bombs activists were mobilizing, buying supplies, and collecting donations.

Len: Were there other activist groups involved, as well as FNB?

Keith: Definitely. Some local community activists secured a church kitchen above the flood line in Brooklyn. Other volunteers were frantically cooking in the basement of the Park Slope Community Church in Brooklyn as activist volunteers from North Carolina arrived with two truck-loads of food and supplies plus two U-hauls full of propane and other equipment.

By the second day the Brooklyn activists had a system, delivering meals and supplies to three or four locations after cooking all morning. The servers would stay out until dark. A few blocks from the Park Slope community Church kitchen, local Occupy activists were starting to organize Occupy Sandy. At the same time, Long Island Food Not Bombs was recovering tons of food  and working around the clock to distribute the donations. [Editors Note: This was true as well in New Jersey; and Occupy Sandy New Jersey is still involved in recovery efforts.]

Even with all the challenges, Long Island Food Not Bombs pulled off their annual World's Largest Vegan Thanksgiving at the Hempstead Train Station, providing groceries, clothing, and warm meals to over 1,000 people. They also provided hundreds of meals each day at their other regular locations, helping make the holiday much better for several thousand people that had survived Hurricane Sandy.

Within a couple of days our toll free line received over 200 calls many from people asking to help. Others told us that the American Red Cross directed them to us desperate to find food. As we saw after Katrina and the San Francisco Earthquake, the American Red Cross was nowhere to be seen, but at least in New York, they did give out our toll-free number as they had also done after Katrina.

Len: What about climate disasters outside the USA?

Keith: When I visited the Philippines last March, I was amazed to discover that local anarchists and one of the Manila Food Not Bombs collectives had not only distributed food, but were responsible for building a bridge through their community during the floods. Just as in the United States, the authorities had been slow to respond. Local politicians saw that the anarchists had provided direct aid, but they tried to hook their political futures to these anarchist initiatives. They were told they were welcome to help, but were not welcome to identify themselves as doing so in the name of their political party or position.

The politicians didn't find any benefit in that, and offered no help to the relief effort. It was inspiring to see that the people in these communities had respect for Food Not Bombs and local anarchists and were clear that the politicians had ignored their plight or in some cases were responsible for policies that increased their suffering.

In short, as I travel I keep re-discovering that anarchists and volunteer local activists are often the first to provide help when official agencies are slow to arrive or remain distant from the most needy. (Perhaps because their organizations are so over-centralized?)

Len: Your travel to the Philippines took you to the Black and Green Forum – held at the University of the Philippines-Diliman – which focused on responding to climate-based disasters. Tell us what came out of this conference. 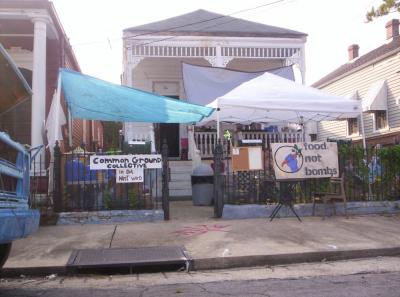 Keith: Speakers at the Forum agreed that the struggle around climate change had two key features. One is how to respond to the immediate impact of the crisis by organizing a system of disaster relief; the other is how to build a massive campaign to disrupt and thwart the causes of the climate crisis. Participants talked about organizing a globally coordinated campaign of direct action to identify, publicize, and push back against those responsible for those causes.

Stopping the climate destruction will require reaching the public with information about the drastic impact they will face if they do not join in taking action. People all over the globe are not only relying on mutual aid and community-based relief when disasters occur. They are taking action to stop hydraulic fracturing, mining, oil and coal extraction, the construction of rail systems and super ports, and many other assaults on the environment in thousands of communities all over the planet. If all of these actions were reported on in a coordinated way as magazines like the "Earth First! Journal" in the United States and the Eco-defense! Journal in the Philippines are doing with limited resources, more people would realize that they are participating in a global struggle that directly affects them. Not only would better sharing of news about all the local struggles provide encouragement, it might also inspire better coordination between now-isolated allies.

Len: How would that work?

Keith: Community activists from all over the world could participate in the formation of this initiative. I reported to the Philippine forum that there had been a discussion during the New Orleans conference about the formation of a North American conference on disaster relief, the publishing of a community disaster relief manual based on past experience, and the development of a communication network ready to respond as the crisis emerges. This in turn inspired a call for both an Indonesian Food Not Bombs Gathering and a South East Asian Food Not Bombs Gathering where one of the subjects would be disaster relief.

Len:  Summing up then: worldwide, people are developing volunteer, locally-based mutual aid responses to combat the sources of climate catastrophe and to protect their communities from the worst effects should those disasters occur. They are not relying on external government agencies or mainstream non-profit organizations, which often not only arrive with too little, too late, but frequently collude with corporations that profit from endangering human and natural life across the planet.

How, though, can these defiant and self-managed initiatives become increasingly more widespread and inter-connected? What steps have been taken towards the North American conference, the disaster relief manual, and the communication network you’ve just mentioned?

Editors Notes: The group that organized the relief in the Philippines was Food Not Bombs and the Local Autonomous Network. LAN is a network of autonomous activists and anarchists active in various areas of concerns. There 13 collectives and many individuals affiliated with it operating in Makati, Taguig, Baliwag Bulacan, Sapang-Palay Bulacan, Cavite, Muntinlupa and Pasig. They are an onsite.infoshop, and an Anarchist and Autonomous Community-Based Resource Center that can be contacted at: http://onsiteinfoshopphilippines.wordpress.com/local-autonomous-network-in-action/

Keith will be back to respond to these and other issues in June. Meanwhile, he welcomes any and all comments, stories, questions… readers may have. And you can contact him at: keith@foodnotbombs.net.

Keith McHenry is an artist, author, and anarchist activist. In addition to co-founding FNB back in 1980, he has recovered and shared food with the hungry for over three decades, and often has been arrested for this, spending some 500 nights in jail. His book, Hungry for Peace, has been called “a glistening, beautiful arrow pointing us toward another way….” (Kathy Kelly, coordinator of Voices for Creative Non-Violence.)