Unions met with worker cooperatives November 13th and 14th to consider how the two can work together to build an economy balancing profits with wider ownership, higher labor standards, environmental conservation, and community well-being. The Cincinnati Union Cooperative Initiative (CUCI) organized the symposium connecting varied unions with worker co-ops or planned co-ops across the country. 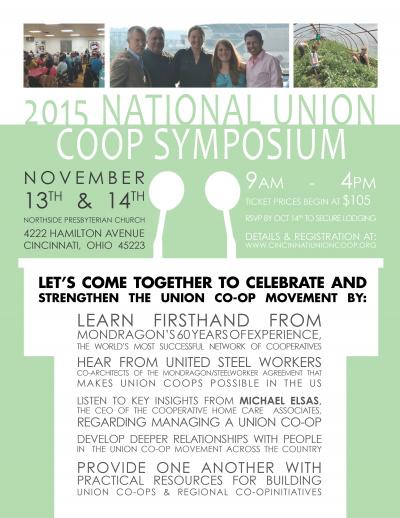 The vision promoted by symposium organizers is this: worker cooperatives can fuel economic growth for marginalized communities and opportunity for workers across the United States. In such a scenario, worker-owners would hold equity in the companies employing them and exercise voice at work through the principle of “one worker one vote.” Unions would maintain their purpose in such a system, even when workers have authority in the workplace, because interests as owners can come up against interests as workers. The union role would include negotiating collective bargaining agreements, handling grievance proceedings, and addressing other conflicts that might arise, just as they do in standard unionized workplaces.

The vision goes beyond economic benefit, however. Michael Peck, president of 1worker1vote, said at the symposium, that “equity is the turnaround” for communities and workers that have seen inequality rise and labor standards worsen as unions have weakened. The worker cooperatives in attendance are working in a variety of market sectors like transportation delivery, health care, housing, and grocery stores that are under-serving low-income communities and consumers. It is an interesting sign of the times that socially-minded actors are trying to affect change through business ventures instead of the sort of nonprofit service delivery that surged in the 1990s. One symposium participant received applause after commenting that “God brought Mondragon here to save the social fabric of a United States at risk of crash.” Presenters at the symposium emphasized the importance of profits but also the community development function of worker co-ops. “Ownership transforms everything,” Peck explained to the audience. “Without that, we’re renting and tithing.”

Reinvigorating workplace democracy is a nod to the past

The idea that unions could create a better society through workplace democracy is not a new one. Laurence Gronlund published The Cooperative Commonwealth in 1884 but was just one voice among many arguing that the good society depended on worker control and ownership of industries as well as the wider political economy. The Knights of Labor alone established 185 cooperatives between 1869 and 1886, according to John Curl in his book For All the People: Uncovering the Hidden History of Cooperation, Cooperative Movements, and Communalism in America. Samuel Gompers, founder of the American Federation of Labor and eventual victor in a vigorous competition over labor’s agenda, had little interest in advancing worker ownership. Without Gompers’ support, worker ownership lost some of its cache. But, the final nail in the coffin on worker cooperatives as a predominant labor strategy came with the National Labor Relations Act (NLRA). Senator Robert Wagner, author of the Act, made collective bargaining rather than cooperatives the main way to establish an American “industrial democracy.”

It’s a familiar story now that collective bargaining has been under attack for decades. Only 6.6% of private sector workers are now union members, according to the Bureau of Labor Statistics. The NLRA, intended by Wagner to “create a free and dignified workingman who had the strength to bargain collectively with a free and dignified employer,” has proven itself highly vulnerable to opposition.

The grand irony is that the language of democracy is what gave opponents their opening to challenge the Act and its supposition that labor is disadvantaged in industrial relations. The first major amendment to the NLRA redefined workplace democracy to mean employers’ rights to anti-union speech and a restriction of unions’ assembly rights. Over decades, judicial and labor board decisions have empowered employers on additional matters. For instance, the Fibreboard decision from the U.S. Supreme Court has allowed companies to refuse bargaining on issues like subcontracting, layoffs, and closing union divisions if they can show their motivations are entrepreneurial. Recently, the NLRB made two moves to reverse decades of rulings and practice advantaging corporations. First, it made procedural changes making it more difficult for employers to delay union certification elections. Then with its Browning-Ferris decision, it determined for the first time that large corporations using subcontracting, franchising, or temporary agencies may be considered “joint employers” subject to bargaining. These are big changes that can aid union organizing if they stick; yet, labor law history suggests a strong possibility of overturn, especially Browning-Ferris. The difficulties thrown up by the constant tug-of-war over the NLRA are bringing unions back to worker co-ops.

Unions at the symposium shared the broad community goals advanced by worker cooperatives and their incubators. A UAW representative was just one among many mentioning wealth inequality and the decline of the middle class as reasons to push forward on worker ownership. But, unions also see worker co-ops as a pathway to whole-market organizing, or getting the entire industry in a local market to adopt union contracts with higher wages and labor standards.

Unions like the Service Employee International Union (SEIU) Justice for Janitors campaign pioneered defensive whole market organizing, using social demonstrations and support from community partners to get corporations to sign contracts without going through NLRB processes. Unionizing worker co-ops would be a similar strategy since the worker co-op community is solidaristic in principle, likely to aid with union certification processes, and unlikely to subject unions to NLRB engagement. CUCI’s Kristen Barker described her group’s experiences with union negotiations as non-conflictual, lacking the antagonism characterizing bargaining processes with typical firms. Michael Elsas of Cooperative Home Care Associates(CHCA) also mentioned that grievance proceedings have been a new experience for their union; since the company is so committed to humanist personnel policies, the SEIU has less trouble getting company responsiveness to employees with personal difficulties impacting work and also accepts firing decisions.

While there is an apparent synergy between worker co-ops and unions, there are hurdles to overcome. Chief among them is helping labor understand the concept and practice of worker cooperatives. Kevin Christensen of the AFL-CIO says the concept “hasn’t yet moved through the structures of labor” like central labor councils or the locals. It is unfamiliar and, in a breakout session, some union participants questioned whether resources should be diverted from member services and defensive campaigns for expensive start-up ventures. Some symposium participants questioned how worker co-ops might function in some key economic sectors like construction with frequent layoffs and health care with pricing driven by managed care. Unions will have to customize their thinking on the cooperative strategy industry by industry, complicating the spread of co-ops across the AFL-CIO.

Kristen Barker made the point to symposium participants that unionized co-ops can only work “if both sides gain benefits.” Besides proven methods for handling labor/management relations at the firm level, worker co-ops at the symposium expected to benefit from unions’ political skills and intimate knowledge of industries, as they attempt to influence policy and enter new markets in the coming years.

Another thing worker co-ops desire from union involvement is some commitment to elevating labor standards across the market. Michael Elsas, president of the largest worker cooperative in the United States, said his company certified with the SEIU for that reason. The CHCA business model involves better- than- union benefits, training, and advancement policies, but the union did not take up the mantle of broad industry change. There have been a few instances of worker co-op employees deciding to decertify from unions, so the added value from unionization must be made clear. A UAW rep. anticipates unions will grow philosophically from their participation with worker co-ops. “Noninclusion has been a big problem in unions,” he said. “Workers’ creativity is not respected, but inclusivity is huge in co-ops.” He believes deepening democracy can strengthen industry as well as organizations, and also produce better accountability to workers or members.

“Our goal is to be Mondragon in the U.S,” said Michael Peck of 1worker1vote’s aspirations for the emerging union co-op sector. Mondragon is the world’s largest group of cooperatives. Per its 2012 Annual Report, it involved 110 worker cooperatives and 289 companies or organizations total; it employs about 80,000, with 85% cooperative members. Mondragon got to that scale by developing a variety of supportive institutions in finance, education, entrepreneurship/research and development, and social welfare, as well as entering industries with larger workforces than are typical of worker cooperatives in the United States. The quick math shows Mondragon cooperatives, affiliates, and other organizations employ an average of 278 people.

Symposium conveners planned sessions corresponding to many of these Mondragon elements. 1worker1vote is developing a college-level certificate program that it hopes will be adopted by community colleges, colleges, and universities through the United States. Presentations by Mondragon’s Gaztenpresa and Michael Elsas of the CHCA discussed the role of mentorship and corporate- sponsored microlending (as an alternative to payday loans) as some of the social aspects of strengthening worker cooperatives. Financing was also a piece addressed at the symposium. Presenters offered crowdfunding and the sale of B-stock as opportunities available to worker-coops, and the North Country Cooperative Development Fund mentioned some movement toward collaboration with other similar cooperative loan funds. This might institutionalize and increase financing options for worker-owned ventures.

While all of these are exciting steps, they do not replicate the Mondragon support institutions exactly. Mondragon runs a university, for instance, as well as its own bank with individual depositors whose deposits can serve as capital for lending. Left unexplored at the symposium were questions of the type of R&D needed to help worker co-ops move into emerging or innovative sectors, as well as ways to institute some form of profit pooling across the population or some subset of existing U.S. worker cooperatives. Also underemphasized was the question of how unions might be able to serve as a source of capital. These may be issues to consider as institutions continue to crystallize.

Access to capital is likely to consume an ever -increasing amount of brainstorming if worker cooperatives begin to move into manufacturing, a stated commitment of participants at the symposium. Success in this area would make the worker co-op sector in the United States look more like Mondragon, and symposium participants have made manufacturing a priority due to job multiplier effects. Business conversion, or selling businesses at risk of closure to existing employees, is the primary way symposium participants are thinking about establishing worker cooperatives in manufacturing. Symposium participants understand that “buying failing businesses is clearly not the way to go,” and interested organizations have tasked themselves with helping unions learn ways to identify good candidates for conversion, as well as make succession planning a routine part of checklist processes.

There is much work to do to get worker cooperatives in the United States to the scale of Mondragon, and laying an institutional foundation is key. Co-ops and unions can benefit from the resources, skills, and knowledge of the other as they move together on a path of institution-building for economic change.

Michelle Camou attended the Union Co-op Symposium and recently launched the Imagined Economy Project to promote discussion about creative approaches to market change. The inaugural report is titled “Three Methods of Worker Ownership” and is available here. Reach her at imaginedeconomy@gmail.com.