Unions and Worker Co-ops: Working Together

Co-Chair, UnionCo-ops Council of the U.S. Federation of Worker Cooperatives

If you missed the Cincinnati Union Co-ops Symposium December 9th and 10th, 2013, keep your eyes open and your fingers crossed for future developments from this exciting and important event!

Mondragon, a well-recognized model co-op economy in northeastern Spain, was well represented. Speakers presented information about their well-developed governance, financing, and education structures and strategies, as well as their recently formed collaboration with the United Steelworkers in the U.S. Since 1956, Mondragon has been building a democratic economy in the Basque region, as it was strongly at odds with the fascist Franco regime that came to power after World War II. Initiated by a priest, Father José María Arizmendiarrieta, the Mondragon effort to create jobs using a shared-wealth model is now almost sixty years strong.

Symposium participants discussed the model union/worker co-op collaboration between Mondragon and USW which became public in 2009. In this model, USW added several principles to the seven principles that have undergirded all co-ops since the mid-1800s. The original principals are:

The USW/Mondragon model has a few modifications: 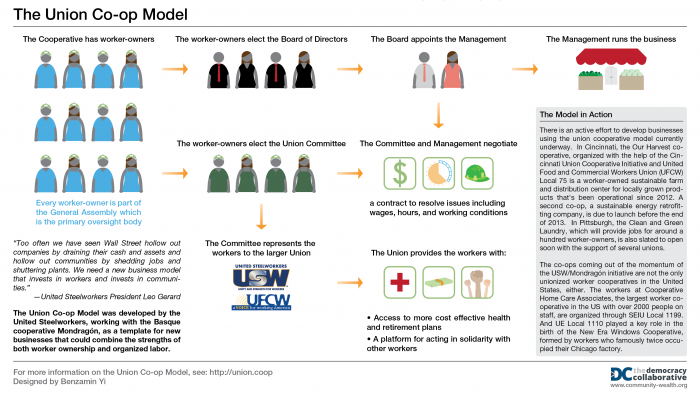 In Pennsylvania, the USW is currently working on several worker co-op projects based on the anchor institution model developed by the Evergreen Cooperatives in Cleveland several years ago. One major project is a “green” industrial strength laundry in Pittsburgh that may evolve into a national network of unionized laundries, as well as potential manufacture of equipment.

In Cincinnati, the UFCW has been working with CUCI to develop a multi-layered food hub. The first component of the project--Our Harvest Cooperative, a worker co-op farm (an unusual structure in the U.S.)—is up and running. The co-op is based on the model in the Mondragon/USW agreement.

At the Symposium, participants discussed Our Harvest by-laws, which are virtually complete, and a collective bargaining agreement, which is still being developed. The by-laws were in final draft form, and were distributed to participants. The collective bargaining agreement, which defines how work will be conducted within the co-op, were introduced in a presentation to the group, but not yet distributed. UFCW and CUCI plan to expand the farm beyond food production to food preparation and distribution. UFCW is reaching out to various food-related projects around the U.S.

The Vision and the Long-term

As explained by Rob Witherell of USW, the union co-op effort isn’t just about one or two co-ops, but about a vision of a new economy which will be accountable, sustainable, replicable, and of benefit to all rather than simply to a small minority of wealthy people at the top. This is a democratic, wealth-building model that involves worker ownership and equity. He explained that efforts are going on around the world to implement such a new economy, and that the United States is just catching onto the tail of the movement now.

He admitted that there will be constant innovation with resulting failures as well as successes, and that perseverance is crucial: “What we’re building is not utopia, and we need grit and commitment to get through. As someone said, ‘This is not paradise and we are not angels.’”

The reality is, most of us in the labor, worker co-op, and community organizing movements are used to difficult and protracted struggles, and ready to work hard to make this vision a reality. Several people mentioned the empowering effect of building something new, rather than resisting capital with diminishing results decade after decade utilizing the traditional union organizing model.

Phil Amadon, a retired International Association of Machinists (IAM) railway worker/organizer and current principal in CUCI, spoke eloquently about his transformative visit to Mondragon, and the crucial need for solidarity and discipline within the union co-op movement. Phil also spoke about labor’s long involvement with co-ops in England and the U.S. (see John Curl’s book For All the People: Uncovering the Hidden History of Cooperation, Cooperative Movements, and Communalism in America, and Steve Leiken’s “Practical Utopians: American Workers and the Cooperative Movement in the Gilded Age”).

Phil commented on the “unanalytical anger” of the current Tea Party movement on the right in the U.S., and remarked that “We can’t build a sustainable economy based on anger at being screwed.”

Despite two Midwestern snowstorms that complicated travel plans for people coming in from around the U.S., the Symposium started and ended on time and was masterfully facilitated by Kristen Barker, president of CUCI and principal organizer of the event, as well as others in a manner that allowed plenty of informative, videotaped presentations and also in-put and questions from participants.

Kristen mentioned that a number of people in the union co-op movement are working to create a fund that will support the formation of unionized worker co-ops. “The Foundation for Worker-Owned Development” (FWD, pronounced “forward”) will be launched in the first quarter of 2014.

Some who attended the Symposium reported back to the January monthly conference call of the UnionCo-ops Council of U.S. Federation of Worker Co-ops (a voluntary organization that has been meeting since late 2007). All agreed that the Symposium was terrific for networking--many people who had met one another only by phone over the years finally got to talk face-to-face. As Dick Peterson from the Rocky Mountain Employee Ownership Center in Denver remarked, “I finally feel like I’m not alone in this effort!” 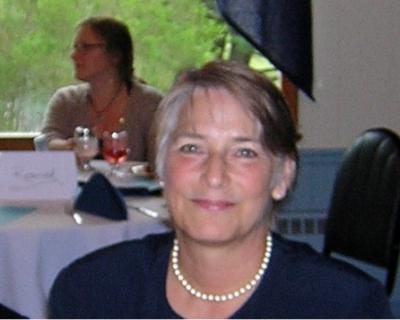 Mary Hoyer is a community and cooperative development consultant working out of Amherst, Massachusetts.  She co-chairs the UnionCo-ops Council of the U.S. Federation of Worker Co-ops and has worked with the Cooperative Fund of New England, the Cooperative Development Institute, the Eastern Conference for Workplace Democracy, Citizens Research Education Network, Asylum Hill Economic Development Committee, the Hartford Public Schools, and the Hartford Federation of Teachers AFL-CIO Local 1018 as a teacher, facilitator and consultant on organizational development, finance and fundraising, governance, anti-racism, public and community education, and union organizing.