On the Potential for an Intentional Community Business Network

The Fall 2018 edition of Communities, focused on “Networking Communities,” is now available by donation for digital download. 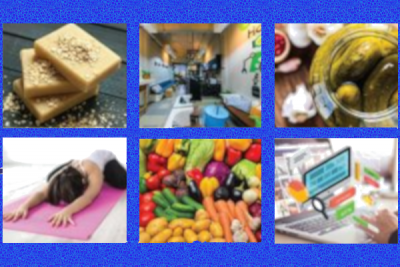 What do pickles, hammocks, eco-hostels, web design, tiny houses, bookkeeping, dance lessons, and herbal medicines have in common? They are all goods and services provided by businesses owned by members of intentional communities.

Yet there is currently no existing network of these businesses. I would love to see such a network created—for the benefit of both business owners and customers. As a customer who prefers to support ethical businesses, it would be helpful to have a designated site where I can search for products and services. As a business owner myself, it would be helpful to have a listing on a network searched by like-minded clients.

The internet is vast and its major entry points are currently controlled by corporate gatekeepers. I’m tired of being directed to large companies by biased search engines. Due to the monopolization of ecommerce by companies such as Amazon and Google, Americans in general lack access to ethical marketplaces. Alternative networks—such as the Communities Directory—can help us find what we seek.

In the mainstream, small-scale and decentralized marketplaces for goods and services have increased in popularity and use over the last decade. Etsy, an ecommerce site for homemade and vintage goods, is the fastest growing example of this trend in 2015, doing 10 times the sales of eBay: $1.93 billion in total sales, $195 million in revenue.

Much of Etsy’s appeal is based in how consumers value unique goods produced by identifiable people—for which they often pay a premium, rather than choosing a similar mass-produced good. Despite this trend in consumer preference, within the world of ecommerce, there are scant examples of an online “ethical marketplace.”

A network of intentional community (IC) businesses could fill a real need for both customers and business owners. I have data to support this claim from a national survey that I conducted for the Fellowship for Intentional Community (FIC) in 2015. In this article, I’m going to share results from that survey as well as a vision born out the entrepreneurial incubator of the University of California, Berkeley. Before I do, I want to set the tone for any anti-consumerism readers who, like myself, retain a healthy skepticism of capitalism:

“Every community formed since the early 1990s that I know of, has been motivated by a spiritual impulse and/or by environmental and social justice concerns. Their founders learned to understand and use tools also used by mainstream culture—creating legal entities, buying property, borrowing money, paying interest—in order to create viable alternatives to mainstream culture.”—Diana Leafe Christian, Creating a Life Together

Taking this attitude to heart, I set about surveying communities listed in the Communities Directory in 2015. From the 1,700-odd American communities listed at the time, I narrowed the sample down to the 679 established communities who had been active on ic.org within four years. I sent out the 21-question survey via email, requesting all business owners within each community to respond. Forty-five businesses from 35 communities in seven regions of the US responded. This 5.1-percent response rate may be partially attributed to that, as a whole, 6.9 percent of Americans owned an established business in 2014. Whatever the reasons for the 5.1-percent response rate, the 45 respondents formed a diverse and relatively unbiased sample of the total population of business owners based in US intentional communities.

Here are the types of goods and services provided by the business owners who responded to the survey:

Analysis of the survey responses produced the following conclusions:

● Across the United States, businesses owned by members of intentional communities offer a wide range of goods and services to customers at the local, regional, and national level.

● These businesses tend to do business with each other and prefer purchasing ethically produced goods.

● More than half rely partially on the internet for some combination of marketing, hiring, sales, and/or delivery.

● More than half accept online payment.

● The most common challenges faced by these businesses are related to time, staffing, and limited local demand, yet the most commonly expressed need for support involved publicity or marketing.

It bears repeating that publicity and marketing were the most common forms of support requested by the survey respondents. A network of IC businesses would provide another avenue of discoverability for these businesses.

So, what would an IC business network entail? The most basic version could be a simple directory where IC business owners could create a listing/profile with their goods/services, location, and contact information. The other side of the spectrum would be a full-service online platform that might facilitate everything from sales and marketing opportunities to job listings and social networking features such as groups.

The target users for either a business directory or full-service platform might include:

1. Customers in the US seeking unique and ethically produced goods and services

3. Cooperative business owners who may not live in residential cooperatives. (This subset would include a drastically larger user base while also diluting the emphasis on ICs.)

Customers will experience the platform as not just an online store, but also a place to network and explore. Visually, it ought to be clean and cozy. The ethical principles of each business ought to be clear. The search function ought to emphasize keywords and location. Search results ought to be displayed in an egalitarian manner to avoid hierarchical list formats.

Of course, envisioning is the fun part; the real work will be fundraising. Funds will be necessary for both initial development and ongoing operation. Funds might be raised through grants, crowd-sourcing, or private investors. Where there’s a will, there’s a way. It’s also worth stating that such a platform could be either for-profit or not-for-profit, depending on business model.

Relevant grant opportunities exist at the state and federal levels, especially in the realm of small-business and rural economic development—a strong argument could be made that an IC business network would support both. Some examples of grant opportunities include Blooming Prairie Foundation, NCBA CLUSA’s Cooperative Development Foundation, and the Small Business Innovation Research and Small Business Technology Transfer programs, which help connect small businesses with federal grants and contracts from 12 government agencies. The Economic Development Administration also provides a number of grants.

If this article is a call-to-action, the next step will certainly be fundraising.

Fundraising entails prudent assessment of the risks involved in developing a network of IC businesses. The idea dates back to 2000 when JT Ross Jackson wrote in his book, And We Are Doing It!, that the Global Ecovillage Network (GEN) had future plans to host on its website “fundraising facilities with multiple choices for donors, e-commerce for “green products” across the globe, a ‘classified ad’ service, ecovillage tourism, and a global clearinghouse for complimentary local money systems” (Jackson 77). In 2015, these plans were manifest in the Baltic Ecovillage Network’s “Market,” which is buried in the ecovillage.org sites and receives minimal participation (there are perhaps less than 150 posts per year).

The FIC has explored business support for its users in the past. According to the FIC’s former executive secretary, Laird Schaub, “In addition to the major challenge of keeping the information up to date (parallel to one of our main challenges in doing the Directory), there was a major stumbling block in getting enough listings of products to make the clearinghouse concept work—both because the numbers weren’t that large to begin with and because the fees needed to compensate the clearinghouse raised the price too much.”

Quality control represents another challenge to developing an IC business network. Several business owners expressed the sentiment that quality is the most important factor for customers. This concept can be conveyed as “Product over politics.” This might also be framed as, “In the end, customers just want a better product.” Possible solutions to the challenge of quality control involve the degree to which the FIC might attempt to control it. On other commercial platforms such as eBay and Yelp, a rating system allows users to signal quality after previous transaction experiences. Whereas on Craigslist, there is no overt framework for quality control other than the ability to report abuse.

Further challenges include the strong anti-consumerism sentiment present in the communities movement, which might be a barrier to adoption by new users. On the opposite side of the spectrum, scaling up or “outgrowing” can occur when a business becomes so successful that it must leave the community in which it was originally based, leaving the community bereft of a major income source. Geographic challenges due to perishable goods and localized service providers may also represent real challenges to user adoption. Finally, the challenge of stigma may exist. During interviews, several cooperative business owners, who were not associated with intentional communities, expressed a sentiment of being disinclined to be grouped in with residential cooperatives. As one owner said, “People always ask us if we all live together.” The owner was quick to dispel that perception due to concerns about professionalism. If cooperative business owners face a stigma of being perceived as cultish or a bunch of hippies, it will be an important point for marketing efforts to avoid or address.

If this article is a call-to-action, the next step will certainly be fundraising. Given adequate funding, a small team of web-developers and marketing specialists could launch a prototype network of IC businesses and begin the long, uphill process of user recruitment. I would relish the opportunity to assist such an endeavor in any way. All along, my motivation has been to aid in the establishment of ethical and resilient alternatives to the business-as-usual economy of the United States. Specifically, the establishment of an ethical online marketplace could empower consumers to make better purchasing decisions, create a counterpoint to encroachment of corporate franchises, and provide economic opportunities for cooperative businesses and the businesses of intentional communities. This overarching vision is in alignment with the Sixth Cooperative Principle (as defined by the International Co-operative Alliance): Cooperation among Cooperatives.

Given the struggling economic climate of the United States and the ongoing trends towards cultural homogenization and monopolization, alternative networks such as the communities movement play an increasingly important role in keeping America weird and resilient. My data and research strongly suggest that a network of IC businesses would address the real challenges of small and cooperative businesses. Inversely, a network would help customers across America find ethical goods and services.

I can already imagine myself swinging in a hammock at an eco-hostel, eating pickles while I search for bookkeeping and dance lessons—all thanks to the IC business network.

James Collector is a graduate of the Master of Development Practice program at the University of California, Berkeley where he studied sustainability through the lenses of business, impact evaluation, and project management. He earned his Bachelors in Journalism from the University of Colorado where he wrote his senior thesis on the structure of the internet and its consequences for digital media. His firsthand experiences living and working in intentional communities in the United States, Argentina, and India have convinced him that there is no better place in which to raise a family and live a healthy life.