Excerpted from the Winter 2018 edition of Communities, “The Culture of Intentional Community”—full issue available for download (by voluntary donation) here. 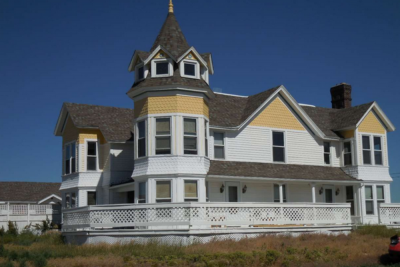 Today the view out my bedroom window is of the open, bright blue skies of Wyoming, with the small college town of Laramie off in the distance. The foreground is dominated by the Holliday Mansion, a structure built in 1878 to house the large and wealthy family of someone who was progressive for his time. My group, the Solidarity Collective, just bought the place, and we are turning it into a radical socialist experiment created by and for working class and poor people in one of the most conservative states in the country.

When I think about the power of cooperation, the new scenery of my life is the most powerful image I have.

This property was neglected and abused for most of the last decade; our group is using collective elbow grease to turn that trend around. The former owner was a cutthroat capitalist who consistently screwed over his own tenants; we’ve invited half of them to stay and join us in cooperative meals, collective decision making, and compassionate money relationships. The bank was about to foreclose; we’ve financed this relationally, drawing on a former community-mate from one of our pasts to make this happen in a way that builds security for everyone involved in a time of economic destabilization.

Our stated mission as a group is anti-capitalist, anti-oppression, and pro-relationship. As a group of politically and socially active folks, we envisioned our mission playing out on bigger stages than these three acres. And yet, culture change that doesn’t seep into daily relationships isn’t all that potent or grounded. Suddenly things got very material and immediate when this property dropped into our laps and we said yes.

I imagine Marx would be proud.

I’m a cooperative culture trainer and promoter, and have been what is often called the “burning soul” for getting this community landed. A lot of my work in the world is helping define, articulate, and promulgate a new understanding of who we can be as a people. The shift from a competitive, materialistic, individualistic culture to a cooperative, relational, communal one has many, many layers to it. It is interpersonal, economic, spiritual, and ecological. It is revealing itself to me in bits and pieces over time, and some days I feel like the best thing I can do for the world is just to take notes as new pieces come into focus.

For the sake of giving you a manageable bite of this pie, I’m going to focus in this article on just a couple aspects of this transition, and not try to say everything. But I’m also including a chart [available in the downloadable issue pdf] that summarizes more aspects of this work, because they are all important and to really separate them out is impossible. For now, though, let’s talk about two aspects of culture change that are not often at the forefront of that conversation, but directly impact our daily relationships: narcissism and dependence dynamics.

The US is, according to the Hofestede measurements (a series of measurements of multiple cultural spectrums), the most individualistic culture in the world, narrowly beating out Australia for that win. This affects many things in our lives, but one of them is a well-documented psychological phenomenon: our rates of narcissism are also off the charts.

I often ask in my workshops who in the crowd ever had a class on cooperation in school, and only rarely do hands go up. Instead, we talk about how we’ve been taught to be independent, competitive, and “successful” in an economic system that pits us against each other consistently and without the slightest apology. And our success is solely measured in individualistic terms. The basic message? We need to be self-centered to survive.

So we come into community with the best of cooperative intentions and a deep longing for something beyond being an emotional and economic island, and almost immediately, all that training arises to make it hard as hell to actually do. Our resistance to the isolation of self-centeredness drives us into community, and then our training rears its ugly head. I watch myself, as well as people I’m close to, in this dance constantly: we want to be in connection, we want to cooperate…but the need to “take care of number one” means that this opening can feel deeply threatening, even to those of us who have spent years “getting it.”

Thus, a functional cooperative culture requires us to do something even more difficult: become self-aware rather than self-centered. Awareness of our needs, our strengths, and our weaknesses (the latter of which you can never admit in a hyper-competitive environment) opens the door for being one important part of a functional team. It also asks us to have discernment about what of our needs we are appropriately responsible for and what we can reasonably ask the group to be responsible for.

I’ve facilitated any number of conversations where a group has gotten stuck in a discussion about a policy because there is no discernment being asked of people—with the resulting policy trying to be all things to all people instead of simply about whether dog’s poop needs to be picked up on the sidewalk, if it is OK to have a private party in the common house, or if turkey can be served at Thanksgiving alongside the vegan options. Discernment is an antidote to narcissism, and it is also an essential component in functional decision-making. It can also interrupt the other thing I want to talk about in this article: codependency.

I find it amusing that the US has an actual holiday called Independence Day. I’m convinced a large portion of why we’ve become a car-loving culture is that cars represent independence for us, and very little is valued more highly in the nation of my birth. (And that of course ties in to the ecological aspects of our culture…but that’s another article.)

In a survey done by the Pew Research Center, Americans were the only population among surveyed residents of western, economically privileged nations to say that “freedom to pursue life’s goals” was more important than “everyone’s needs met.” This is not a western mindset issue; it is a distinctly American issue.

The result of this thinking is devastating. “Means testing” for social safety nets seems reasonable to most Americans, the “American Dream” is closely tied to ideas of lifting ourselves by our own bootstraps (never mind that one needs boots to do such a thing, and they are expensive), and many young people cresting their 18th year into adulthood suffer from deep anxiety about not being able to make it independently. Depression levels are at an all-time high among youth, and I lay a significant portion of the responsibility for that at the feet of this obsession with independence.

The alternative can’t be codependence. Codependence comes about when one individual starts to feel they are solely responsible for the well-being (emotional, social, or economic) of those other individuals around them and subsumes their own needs to make that happen. It’s still an individualistic way of operating, centering the power of the “I” as in “I will fix this for you.” What we need instead is a model of interdependence. Fortunately we have one in the non-human world of ecosystems.

If we look to how natural systems work, we can see that a collection of animals, plants, elements, minerals, etc. are all coexisting and co-contributing. Each being has a niche that is valuable, and no being can operate fully independently. Humans (and especially Americans) like to pretend we are somehow exempt from those interconnected systems, but we aren’t. That attempt to exempt ourselves is causing incredible ecological damage to the whole planet, and it behooves us both socially and ecologically to take a good hard look at the cultural paradigm that has set that up.

We can practice something different in our small circles of community. It may not sound very sexy, but things like taking a skills inventory and helping each other find healthy niches in the system of our communities is one concrete way to counteract our tendency to try to do it all ourselves. Cultivating a culture of appreciation for contributions of all sorts (whether they are physical, economic, emotional, group process, or any other kind of contribution) is another way to create a different foundation that sees value across sectors and counteracts the illness of hyper-independence. Mentoring and skill sharing from a place of trust rather than honing our individual competitive edges is another basic relational way to interrupt this.

Culture change is lifelong work. Many of us have been at it in community for multiple decades and we still bump into defaults of disconnecting, individualism, and competition when the going gets hard. But by unpacking each aspect of this culture change systematically, we can, over time, start turning the tide. I’m grateful to have companions on this journey: you as the reader and everyone else attempting cooperation in its many forms. We are all social changemakers simply by making the attempt.

Excerpted from the Winter 2018 edition of Communities, “The Culture of Intentional Community”—full issue available for download (by voluntary donation) here.

Yana Ludwig is a cooperative culture pioneer, intentional communities advocate, and anti-oppression activist. She makes her home at Solidarity Collective in Laramie, Wyoming, is a regular host on the Solidarity House podcast, and serves on the board of the Fellowship for Intentional Community. Her book Together Resilient: Building Community in the Age of Climate Disruption (written under the name Ma’ikwe Ludwig) won the 2017 Communal Studies Association Book of the Year Award. More on her cooperative culture work can be found at www.YanaLudwig.net.