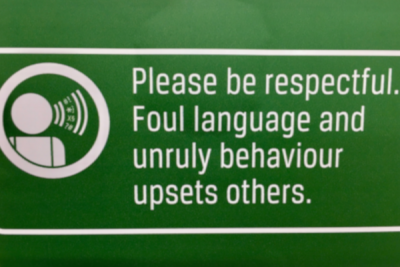 Although not inevitable, it’s relatively common for groups to struggle with the patterned behavior of one or more members that most others in the group find disruptive or challenging. Maybe the person is regularly irritable (or at least uncharitable); maybe they lash out at those who disagree with them (after all, we have a President who does that); maybe they regularly leak sarcasm. Once I witnessed a group struggle with a member who had an abrupt, staccato laugh that set people on edge. Pretty much anything out of the ordinary can be experienced as "a problem."

Let’s label the person with the triggering behavior Person X.

Essentially you have three choices in how you respond:

a) You can ignore them, hoping they'll go away (or at least the behavior will go away) if it doesn't get attention.

Depending on how much Person X cares about how others respond to them, and understands that a change in behavior might produce a better connection, this might work. Mostly though, I think this strategy hinges on a level of subtlety that Person X won't possess, and the essential trade-off is that it's acceptable to lose Person X as a contributing member of the group in exchange for relief from their difficult behavior. And they may well continue to do the thing that bothers you even after they've been marginalized, so this is an iffy approach.

b) You can ostracize them or try to contain them—essentially putting them in the penalty box for being too weird. Maybe this means they're never picked to serve on key committees. Maybe their input is systematically ignored or undervalued. Maybe no one asks how they're doing. There is nothing in writing, but everyone knows the drill, and they're treated as a second class citizen (or maybe third class, depending on how stratified your group is).

c) You can try to understand them, adjusting how the group responds to their behavior.

I think the most fruitful way to think about this dynamic is as a diversity issue. How far is the group willing to go to embrace a range of styles? This is a nontrivial question that groups are often resentful having thrust upon them.

To be clear, I am not taking a position on the answer to this question (no group can be all things to all people, and there are always limits to how far a group can stretch to embrace "other"), yet I've witnessed plenty of examples where a group has given up on Person X because it's far more comfortable to label them "the problem" and to pull a full Pontius Pilate, than to look in the mirror and do the personal work needed to expand beyond one's comfort zone to bridge to Person X with all their warts.

As a facilitator, my default is to throw the obstreperous a life ring—rather than to shackle them with the psychic equivalent of a horse collar or an electronic ankle bracelet (pick your metaphor). If you can set aside, at least temporarily, the group's reactivity to Person X's delivery, and focus on the meaning of what they're saying, I've found there's a good chance that Person X will start to behave better—which is a good deal all around. Though I am not guaranteeing this result, I've enjoyed considerable success with this approach.

Challenging deliveries, I think, are best understood as ill-conceived strategies for getting heard. What's more, in most instances Person X is following a lifelong pattern rather than choosing to be difficult. They're just doing what they always do. (One of the ways this breaks down is that others can't imagine that Person X is oblivious to how much the group struggles with their behavior and therefore posit that it's purposefully chosen, and then they're outraged about that, too. It can get pretty messy.)

Challenging deliveries, I think, are best understood as ill-conceived strategies for getting heard.

Thus, when the obstreperous get heard (mission accomplished), they tend to calm down and their behavior improves. If groups focus first on Person X's awkward or provocative delivery and insist on dealing with that as a precondition to working with Person X's point of view ("I'll be damned if we'll let Person X get away with that disrespectful shit") it rarely works. You push; they push back. (The applicable adage here is what you resist persists.)

I know this sounds counterintuitive (leaning into the punch) but it's the main approach I employ in working with so-called difficult people.

Notes Along the Way

•  Have you defined what kind of meeting behavior you are asking from members? (It’s not particularly fair or effective to hold people accountable to norms or standards that have never been articulated.)

•  Has a good faith effort been made to discuss with Person X what’s been difficult about their behavior? Note that this should include what alternate behavior is being requested.

•  What is problematic to some may be a breath of fresh air to others—don’t assume a uniform analysis.

•  It's sometimes useful to drill down on what exactly is being problematic. Here are some possibilities:
—Is the behavior experienced as aggressive and bullying (comes across as intimidating)? Does making room for Person X mean losing others, who no longer feel safe if Person X is allowed to behave in a challenging way?
—Is it manipulative? If the group has no agreements (or skills) in working with strong feelings then the emergence of distress can derail the conversation. If people think that's being done strategically—rather than as an honest emotional reaction—there can be hell to pay.
—Is it indirect? If Person X injects snide comments into the conversation, perhaps through sarcasm, biting humor, or negative side conversations that are quickly disavowed if asked what's going on, it can cast a pall over the group.

•  Does Person X care that their behavior is perceived as disruptive? You have more options for remediation available to you when they do, than when they don't.

•  The goal is to protect the right of Person X to have their views expressed and taken into account while at the same time not allowing their behavior to get in the way of the same right being extended to others. It's not a one-way street, and sometimes you have to rub their nose in it, after you have heard what they have to say.
Go to the GEO front page