As a professional facilitator for more than three decades, I've had ample opportunity to observe which skills make the most difference. As a facilitation trainer the past 15 years, I've collected plenty of data about which lessons have been the most challenging for students to digest. Taken all together, I've decided to assemble a series of blog posts on the facilitation skills I consider to be both the hardest to master and the most potent for producing productive meetings. They will all bear the header Key Facilitation Skills and it's a distillation of where I believe the heavy lifting is done.

Distinguishing Weird (But Benign) from Seductive (Yet Dangerous)

For anyone who has spent a chunk of time facilitating meetings, it's a certainty that you've experienced being thrown a curve ball or two. That is, something happens that you didn't anticipate and you need to quickly sort out where that's headed and whether you want to be there. (Semi-tongue in cheek, I tell students that the difference between a good facilitator and a great one is about 10 seconds—don't tell me later about the brilliant thing you should have done—tell about the inspired thing you actually did).

Your ability to work fluidly (and creatively) with surprises relates directly to your comfort at working off script. While it's good to make a plan for how you think the meeting might go (and how you'd like it to go), there's truth behind the adage that people plan and the gods laugh. That is, reality bears only a casual relationship to plans and skilled facilitators need to be light on their feet, ready to go with the flow—so long as it's in service to the agenda, or the group's wishes. 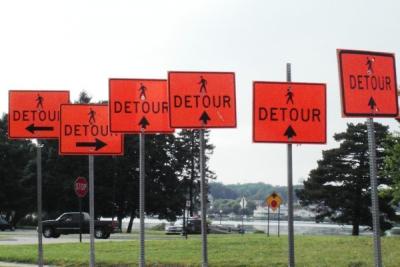 The first order of business, once the unexpected makes an appearance, is determining whether you're veering off course, or just making an unexpected stop on the way to your regularly scheduled station. Let's walk through some possibilities:

•  It could be that the speaker has an unusual way of expressing themselves, and the group needs help translating their input into something more digestible. Perhaps English is not the speaker's first language, and they stumble over idioms, or use words ambiguously.

•  It could be that the speaker is bringing up a perspective that wasn't on anyone's radar, but is nonetheless germane. The speaker may need the facilitator's help articulating the link between their statement and a group value.

•  It could be something off the wall—by which I mean unhelpful to the matter at hand—yet relatively harmless. That is, everyone groks that the input is a non-starter, the statement is not being that disruptive (it may even be entertaining), and it's easier to let the person finish and move on than to attempt to redirect them. It's a judgment call.

I bring these examples up for a couple reasons. First, they actually happen. Second, groups tend to get uneasy when they don't understand what someone is saying or why they're saying it. A decent facilitator will immediately pick up on that discomfort and may feel called to step in, to protect the herd—much as a shepherd might circle the flock upon hearing the cry of a wolf. Yet, in none of the examples I gave above would clamping down be a good choice.

Now let's approach this from the other angle—where the speaker's input is congruent with the group's energy (rather than confusing or disruptive) or at least able to harness it, and at the same time is inviting the group's attention to shift away from where it had been.

This can be dangerous, as it may undercut the progress that had been made on the agreed upon topic, and the facilitator is at risk of losing control of the meeting to the silver-tongued orator. While facilitators need to be alert to disturbances in the group's energy, they also need to be mindful of cross-town buses—conveyances that explore interesting, yet off-topic subjects. The facilitator needs to be diligent about keeping the group's attention on the agreed upon topic until it's completed, or the group explicitly chooses to change topics.

Cross-town buses can appear for a variety of reasons:

—The speaker may spontaneously be inspired by the conversation to make an impassioned pitch for something related to the topic at hand, without realizing that they're subtly changing the topic.

—The speaker may have felt all along that the point they're addressing is more potent than the agreed upon topic, and is happy to have the group shift its attention their way.

—The speaker may be uncomfortable with the focus where it is and is offering a distraction to deflect the spotlight to something less awkward. Sometimes the deflection is freighted with considerable passion, the better to obscure their sleight of hand.

Regardless of the underlying cause, however, the facilitator needs to step in as soon as it becomes evident that the topic has shifted, forcing the group to choose between returning to the topic that was abandoned, or deliberately choosing to shift to the new topic (if that's more compelling).

I've packaged these two somewhat tricky aspects of facilitation together because they both call for the facilitator to act against the flow. In the first instance I'm advising caution when there may be an impulse to step in. In the second, I'm suggesting the reverse—stepping in promptly even though no one is asking for intervention (or even senses that it's needed).

For facilitators the bottom line is whether what's happening serves the group and what it agreed to discuss. If something is off, it is the facilitator's job to find the least disruptive response that will return the group to productivity.

3 Steps to Bootstrapping a Bossless Organization

Getting to Consent with Sociocracy