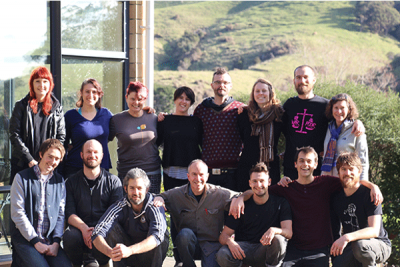 Perhaps you remember the scenes, during the Occupy movement in 2011, of hundreds or thousands of people making decisions together in parks and squares. They used strange hand signals, unwritten rules, and a “people’s mic” that amplified speakers’ voices through repetition by the crowd. This ecstatic democracy was short-lived. At the movement’s epicenter in New York City, these general assemblies faded away after police cleared the encampment that November. But in Wellington, New Zealand, a group of activists from the local Occupy group gave their assemblies an afterlife in an app. Now, they face the challenge of making it succeed in an online economy that remains far from an Occupy-style utopia.

Loomio, as their creation is called, has already enabled thousands of groups to deliberate, debate, and make decisions online. It translates the jargon and hand signals of direct democracy into an intuitive pie chart of opinions and a comment thread. True to its democratic ideals, the company is a worker cooperative, owned by the people who develop the software.

Loomio’s values have won it a devoted user base. But they’ve also meant that the usual rules for starting a tech company don’t apply. The most common method for building a big online platform is to raise a lot of money quickly, achieve ubiquity, and then sell the company in a buyout or an initial public offering in the stock market. To get that quick money early on, founders pass considerable ownership and control to investors, who then cash out when the company gets sold.

But this won’t work for a mission-driven co-op. Cooperatives have to remain under the control of their members, not their investors, and mission can’t take a back seat to profits. As cooperative culture spreads into the tech world—a trend some of us have called “platform cooperativism”—Loomio is part of a new wave of entrepreneurs trying to figure out how to finance a more democratic, values-centered online economy.

In recent months, Loomio has raised nearly half a million dollars without giving up control. To understand how, I spoke with Ben Knight, one of the company’s founders.

Nathan Schneider: Since it emerged out of the Occupy experience, how far has Loomio come?

Ben Knight: When we got a prototype up and running in 2012, it was immediately clear that it’s not just activists who need to make decisions together. Over the last four years, Loomio has been used by thousands of change-makers, businesses, governments, city councils, and community groups. It has been used by companies and boards of directors for rapid collaboration, as well as by activist networks to democratically organize large-scale protests. It has been used by governments to engage citizens in collaborative policy-making, right down to families using it to make decisions about how to care for elderly relatives.

People have used Loomio to make more than 40,000 decisions in more than 100 countries, and our international community has translated the software into 35 languages already.

Schneider: So you’ve got a platform being used around the world. Why has financing been so hard?

Knight: The main challenge we set for ourselves was finding a way of funding Loomio to scale that was strongly aligned with our social mission. We’ve felt from the beginning that traditional venture capital is not a good fit for an organization that puts its social mission first. Initially, it was difficult to find models to follow because the default financing mechanisms are built on the assumption that most companies will fail. So investors see the possibility of near-infinite return as a necessary prerequisite for investment.

Schneider: The knee-jerk question of the techno-optimist: Did you try crowdfunding?

Knight: We ran two successful crowdfunding campaigns in the earliest stages of Loomio’s development. The first was a tiny campaign in the first couple of months, when Loomio was literally just an idea. Once we had a prototype up and running, we ran a more substantial campaign to fund the transition from a proof-of-concept to a solid web tool that could scale. We raised enough to fund a year of development, from more than 1,600 people all over the world.

Relying purely on the generosity of our personal networks, however, didn’t feel like a sustainable way forward. We felt we owed it to all the people who had put their trust in us to find a way to pick up the pace without burning out.

Schneider: Last time I saw you in the United States, you were looking for foundation support. How did that go for you?

Knight: We’ve had support from inspiring folks like the Shuttleworth Foundation, the MacArthur Foundation, the Sunlight Foundation, and the Namaste Foundation. But the more conversations we had with people who had been there before, the more apparent it became that the 501(c)3 structure just isn’t built for the type of scale involved in a high-growth software company.

Given that enabling behavioral change at a global scale is such a core part of our social mission, we knew we needed to find a financing mechanism that was aligned with the ability to move quickly and grow appropriately.

Schneider: What came next? What led you toward another approach?

Knight: This realization about alignment led us to reaffirm our roots as a social enterprise—“social” meaning that we put our social mission first, and “enterprise” meaning that we take an enterprising approach to financial independence to drive positive impact.

We settled on a mechanism called “redeemable preference shares,” which was exactly what we were looking for—a way of providing a fair return to investors while also protecting our social mission. Within two months, we had raised $450,000 from a small group of investors. Our lead investor is Sopoong Ventures, a social venture fund based in Seoul. The name Sopoong is an acronym for “the social power of networked groups,” and the fund is a perfect partner driven by the same vision and values as we are. Our investors have been an amazing addition to our team, providing much more than just money.

Schneider: What are redeemable preference shares, and what makes them such a good fit?

Knight: Redeemable preference shares are a fairly conventional financing instrument, but aren’t widely used in the startup world. “Redeemable” means that the shares are not traded externally. Instead, the shares are eventually purchased (“redeemed”) by the company with an agreed-on return, after an agreed-on period of time, provided the company is producing sufficient surplus. In our case, setting up the investment mechanism meant creating a new class of impact-investor shares. These shares sit alongside the worker-member shares in the cooperative, which are non-financial governance shares. The interests of the company and the interests of investors line up.

Schneider: Where’s the accountability? Who holds what risk?

Knight: In terms of accountability, we work closely with our investors as trusted advisors. We take their input seriously, and if they ever feel we’re getting off track, with our business or our social impact focus, then we’ll engage in deliberation to come to a shared understanding. But the bottom-line decision-making sits with the cooperative. And our investors are comfortable entering into a collaborative relationship on those terms.

This trust comes from a strong sense of alignment with a shared social mission, and from the shared risk in the development of Loomio. There has been a huge amount of unpaid time on the part of the founders and workers, so they’re carrying risk just like our investors do. Clearly, the founders aren’t aiming to get rich quick and walk away, so it feels much healthier than the strained founder-investor relationships you sometimes see in the conventional startup world.

Schneider: How long will this arrangement keep Loomio going and growing?

Knight: We’re rapidly building a robust organization to make the transition from a bootstrapping, startup phase into a proactive, growth phase. Another major focus for this year is making it as easy as possible for people to use Loomio alongside the other tools they use in their work. Our goal is to get to the point where making group decisions online is as easy and natural as checking your email. We will be raising another round of impact investment later this year.

Schneider: Is your strategy replicable? How can others get in on it?

Knight: We now know it’s possible to raise capital in a way that doesn’t compromise a company’s social mission. Redeemable preference shares provide a well-tested and flexible framework, and there are other models that can be used to achieve a similar purpose.

Schneider: When were you most tempted to give in and take the big VC money?

Knight: Along the way, people steeped in the Silicon Valley venture-capital mindset told us that we were crazy even to be attempting to find ethical investment. They told us no one cares about social impact that much.

Our experience is that this just isn’t true. The main lesson for us was the importance of sticking to our values and finding that there truly are plenty of values-driven people and organizations that want their money to be doing positive things in the world.

Nathan Scheider is the author of, most recently, Thank You, Anarchy: Notes from the Occupy Apocalypse. Follow his work on Twitter @nathanairplane and on his website, TheRowBoat.com.