How Co-ops are Committed to Meeting Community Needs

Bottom Dollar Food’s store in Ambler, PA opened in October 2013 to great fanfare: The mayor of Ambler, Bud Wahl, gushed in a press release: “Right now, we don’t have a grocery store in Ambler…our community has been waiting for the store and could not be more excited.”

Now, just one year later, Ambler will once again lack a grocery store. Bottom Dollar Food announced last month that it will be closing all of its Philadelphia-area stores. 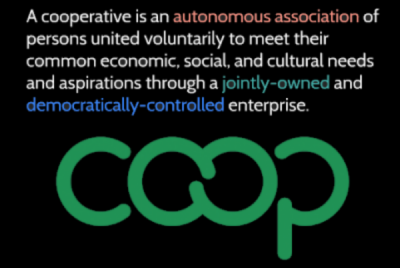 However, residents of Ambler are organizing to open a food co-op, a grocery store they will co-own and democratically control. And there’s little chance that Ambler Food Co-op would decide to relocate — its sole purpose will be to operate a grocery store in Ambler.

Cooperatives are the original social enterprise. They are businesses that exist to meet a community’s needs. In this new series, I will explore the cooperative movement in the Philadelphia region. Our region has more than 100 co-ops, including food co-ops, credit unions, energy co-ops, worker co-ops, housing co-ops, childcare co-ops, artist co-ops, producer co-ops and more. I’ll give you the rundown on interesting programs and events happening around Philly area co-ops, connect Philly’s co-op movement to national and international conversations, and discuss questions about how to grow our region’s cooperative economy in a just and sustainable way.

My interest in cooperatives began around 2009 when I moved to Bellingham, a small city in Washington state. Bellingham boasts a 17,000 member food co-op and a credit union to which half of the county’s residents belong. As I got involved in these two beloved community institutions, I grew fascinated about the cooperative model.

During a dark northwest winter, I read everything I could get my hands on about co-ops. I was working at a very traditional social service agency and I was frustrated that so many resources were poured into providing band-aid services that did nothing to address the root causes of economic inequality. I found that cooperative enterprises are nestled in a sweet spot between nonprofits and conventional businesses. I began to see the cooperative model as a long term, nonpartisan method for democratizing wealth and social power.

Since that winter, I’ve embraced cooperative enterprise as the focus of my work and community involvement. I returned to Philadelphia in 2012 and quickly joined the efforts to launch the Philadelphia Area Cooperative Alliance (PACA), a cross-sector membership association for co-ops and a co-op itself. Today, PACA has an executive director, Peter Frank, and 15 co-ops and credit unions as members.

In the United States, co-ops have long grouped themselves along sectoral lines – e.g., an association of housing co-ops or credit unions or food co-ops. Building connections across these different sectors is a huge opportunity for collaboration and growth.

Our region is experiencing a wonderful co-op boom. Several startup co-ops are now launching and are building on the success of veteran co-ops like Childspace CDI, Weavers Way Co-op, Mariposa Food Co-op, and many others. South Philly Food Co-op and Kensington Community Food Co-op are both nearing the moments when their years of organizing will result in real, brick-and-mortar grocery stores in their neighborhoods. Win Win Coffee Bar, a new cafe and restaurant opening at 9th and Spring Garden, organized themselves as a worker-owned co-op to bring democracy into their business operations. Temple students have founded the new Rad Dish Co-op Cafe after finding campus food options lacking.

These co-op startups take a long time to get started, especially compared to the pop-up storefronts of investor-owned corporations like Bottom Dollar Food. But the resulting co-op is an organization that is permanently rooted in a place and totally committed to a specific community.

Even the co-op startup process itself is incredibly valuable: it is community organizing. It is neighbors meeting neighbors and talking about their common problems and their shared visions. It’s building lasting economic democracy that could transform our daily lives.

GEO 74: From the Editors

An Intro to Jubilee Economics