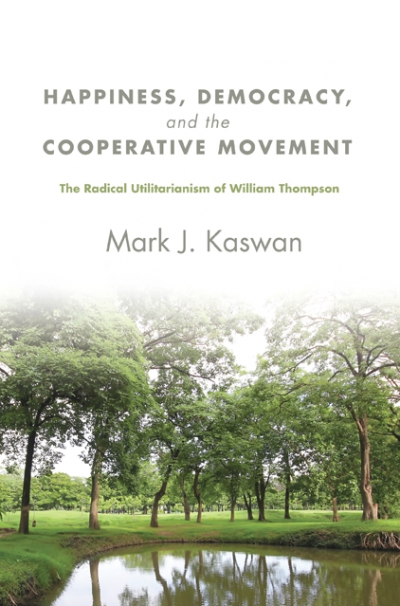 Reviewed: Happiness, Democracy and the Cooperative Movement: The Radical Utilitarianism of William Thompson

”Happiness is political,” is the opening line of Kaswan’s provocative book on William Thompson’s theory on the social nature of happiness and its ramification for organizing a just society. Kaswan introduces the reader to Thompson (1775-1833) as “perhaps the paradigmatic case of a traitor to his class.” Thompson was the only son of a wealthy merchant in Cork, Ireland; however as a political theorist, he developed ideas of the Enlightenment in a liberatory direction, calling for the elimination of subordination in all its manifestations. He was an ardent feminist, an abolitionist, an advocate for the working class, and a “founding theorist of socialism.”

Kaswan argues that Thompson’s political philosophy is grounded in his theory of happiness. In the first section of the book, Kaswan gives an overview of the history of the concept of happiness with a focus on distinguishing Thompson’s view of happiness from that of Jeremy Bentham (1748-1832). Thompson and Bentham were contemporaries and friends, and Thompson was greatly influenced by Bentham’s work. However, in the end, Thompson’s conceptualization of happiness is much more social than Bentham’s and led Thompson to call for a reorganization of society into democratic egalitarian communities.

Bentham is the father of modern utilitarianism and articulated its fundamental reframe, the greatest happiness principle: “It is the greatest happiness of the greatest number that is the measure of right and wrong.” Bentham believed that humans are primarily motivated to maximize pleasure and minimize pain. In the political sphere, Bentham advocated representative democracy and believed that the people could hold politicians accountable for realizing the greatest happiness principle by voting. In the economic sphere, Bentham couched utilitarianism in the classical economic ideology of Adam Smith and David Ricardo. Bentham had an individualistic concept of happiness and believed people pursued happiness in the context of the marketplace. Bentham posed that pain and pleasure could be accurately quantified by the invisible hand of the market, thus money was the measure of happiness. According to Bentham, individuals could realize happiness in large part by accumulating wealth. Wealth not only allowed people to purchase the necessities of life but also lessens the pain of anxiety about the uncertainty of the future. Bentham did not believe that the government had a role in helping people meet their needs, even less their desires. He thought the intrinsic drive to maximize happiness was so powerful that people could realize their own happiness in the right social context. He believed the primary role of government was to provide the security necessary for people to be assured that their work and investments now had a realistic chance of realizing their material goals in the future. Thus, Bentham’s conception of the role of government was similar to John Locke’s, who believed the primary purpose of government was to protect property. 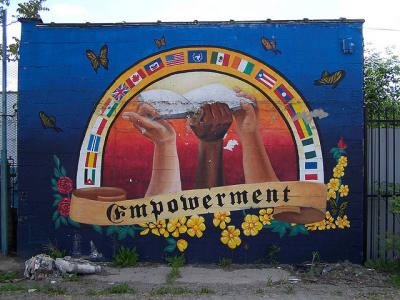 Like Bentham, Thompson also believed that maximizing happiness was the center of ethics and politics. However, in contrast to Bentham, Thompson was much more cognizant of how the elite use their power to maximize their interests at the expense of the majority. In the context of the industrial revolution and enclosure of common lands, Thompson witnessed the miserable conditions in which the working class lived. Moreover, Thompson was keenly aware of the fact that a large majority of humanity was subjugated by multiple forms of oppression including class domination, slavery, racism, and the suppression of women. Thompson anticipated many of Marx’s criticisms of capitalism, a term not yet coined in Thompson’s era, arguing “the system of individual competition” was the primary impediment to happiness for the vast majority in society. He pointed out that class conflict was inherent in the system: “The real interest of the capitalist, as such, is always and necessarily opposed to the interest of the laborer.” Thompson asserted that capitalists’ wealth was created by expropriating the products created by labor. “There can be no other source of this profit than the value added to the unwrought material by the labor guided by skill expended upon it. The materials, the buildings, the machinery, the wages, can add nothing to their own value. The additional value proceeds from labor alone.” Thompson decried the fact that the organization of production by capitalists debased workers. It deprived workers of a means of subsistence and thus coerced them into working in degrading conditions for capitalists. Dependent on capitalists, workers lived under a perpetual state of material insecurity. Moreover, it was in the capitalists’ interest to keep workers in a state of ignorance depriving them of education and the intellectual pleasures that come with it.

In planning an alternative to capitalism, Thompson was greatly influenced by Robert Owen (1771-1858) who gained fame for managing a cotton mill and company town while implementing progressive reforms to improve the lot of workers in New Lanark, Scotland. The village of New Lanark is now a UNESCO World Heritage Site. Thompson adopted from Owen two primary ideas. First, Thompson and Owen rejected the bourgeois individualism assumed by Bentham and argued that social circumstance is the primary determinant of the development of an individual’s character. Thus, it was important to organize social institutions that nurtured the positive development of individuals. While Bentham’s focus was on the individual, Thompson focused on the nature of social institutions and the structure and pattern of social relationships. Since the production of wealth was the primary prerequisite for happiness, Thompson was particularly concerned with economics and the nature of work. The second idea that Thompson adapted from Owen was the importance of cooperative communities.

Kaswan argues that Thompson’s most important contribution to political theory was extending the application of democracy beyond representative democratic governments to cooperative communities and work. Thompson developed detailed plans for creating self-sufficient democratic communities populated by 500 to 2,000 people. Thompson believed that a population that size was great enough for a community to benefit from specialization and the division of labor but small enough so that members could have personal ties with all other members. All productive capital and land in the community would be jointly owned and the fruits of the community’s labor would be shared equally. Thus, class interests would be eliminated and the self-interests of community members would be aligned with the entire community’s interest. The community would be governed democratically. Thompson posited that there would be a synergetic effect between democratic participation and education. Participating in self-governance would stimulate interest in education both individually and communally. Moreover, the community would be invested in the education of its members, thus potentially improving democratic decision making over time. Thompson also hypothesized that aligning personal and community interests would increase work productivity and create more opportunities for leisure time.

The questions with which Thompson grappled throughout his life continue to be of utmost importance in our time.

Thompson advocated an evolutionary approach to social change. He believed that if several democratic communities were founded, then they would spread by example. However, Thompson died before trying to found a democratic community. He attempted to leave his land and estate for the express purpose of founding a cooperative community, however his sister sued to have his will overturned, and the resulting 20-year legal battle exhausted most of the wealth of the estate.

The questions with which Thompson grappled throughout his life continue to be of utmost importance in our time. Exploitation, expropriation, inequality, racism, sexism, colonialism, and militarism continue to be inherent characteristics of global capitalism. Moreover, we are facing multiple imminent environmental catastrophes. The imperative to reorganize society to create a political economy in harmony with the physical world based on egalitarian democratic institutions controlled by ordinary people has never been greater. Kaswan’s exploration of Thompson’s ideas on happiness, mutual aid, and cooperation is a valuable contribution to the social struggle to find a rational way forward.

John Lawrence is a professor of psychology at the College of Staten Island, The City University of New York. He is also a member of the Grassroots Economic Organizing collective.