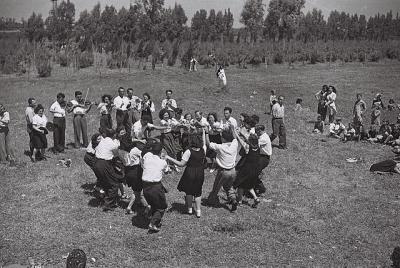 Probably one of the most important research articles on worker ownership was published by Tal Simons and Paul Ingram: “Organization and Ideology: Kibbutzim and Hired Labor, 1951-1965”. It is both an important practical article and a key theoretical article. In it, the authors present real-world research on the link between ideology and degeneration in worker-owned businesses, but first, to serve as context for their analysis, they set out a detailed and valuable theoretical model of the fundamental role of ideology in organizations and in society as a whole.

The subject of Simons and Ingram’s paper are kibbutzim, radical Jewish communes in Israel that share many features with worker-owned businesses. Kibbutzim are places to live, but they are also places to work, in agriculture and in other industries, and in their article, Simons and Ingram track employment patters in several different kinds of kibbutzim between the years of 1951 and 1965, studying how these unique communes struggled over this time to resist degenerating into capitalist organizations and to stick to their founding socialist principals.

Just like in worker-owned firms, ideally, everyone who works at a kibbutz should also be a member of that kibbutz, but under economic pressure, many kibbutzim started hiring more and more outside workers in this period, significantly degenerating away from their founding, democratic philosophy, and Simons and Ingram show that ideology played a central role in determining how much hired labor the various different kinds of kibbutzim employed over time. The authors found that those kibbutzim that shared a strong, collective ideology were far less likely to degenerate.

This research supports the idea that building a strong, shared cooperative ideology in a worker-owned business is key for success, but some folk may have a hard time with the idea of promoting a particular ideology in their cooperative because the word ideology often has a negative connotation. However, that is not how I use it here, or how Simons and Ingram use the word in their analysis. As Simons and Ingram define it, an ideology is simply a particular way of making sense of the world. Some ideologies can be positive; others can be negative, but they are unavoidable. We all have our own ideologies that we use every day to get through our lives.

In a business sense, we can understand ideology as the mission or the vision of a company, the fundamental philosophy that underpins how a company does business. For most businesses, that philosophy is some form of capitalism, but for worker-owned businesses, it is more likely a version of collectivism or socialism, and Simons and Ingram show that if a worker-owned business promotes a strong, shared ideology among its members, it will be less likely to degenerate into a capitalist business over time.

This certainly seems to be the case for the Mondragon cooperatives in the Basque country in Spain. Researchers theorize that the original, very strong founding ideology of the Mondragon Corporation has progressively weakened over the years, and that this has lead the Corporation to significantly degenerate: buying up foreign subsidiaries, but not converting them to cooperatives in their own right.

A strong cooperative ideology is therefore an important resource for a worker-owned business in its efforts to avoid degeneration, but this raises the practical question: how exactly is a strong shared ideology built and maintained in a business?  Simons and Ingram argue that ideology is managed in organisations in two basic ways: through socialization and through selection. By selection, they mean recruitment, that an organisation can try to manage its internal ideology by selecting members who share in that ideology already. Selection is frequently how worker-owned startups establish their cooperative ideology, by deliberately seeking out co-founders who are enthusiastic about starting a collectively owned and operated business.

But selection can only get you so far. As a worker-owned business grows, it can’t count on always finding new employee-owners who will come to their jobs already committed to cooperative ideals. Eventually, worker-owned businesses will need to manage their internal ideology through a continuous process of socialisation, or as it is usually called in this instance, cooperative education. Capitalist businesses usually don’t have to worry too much about socializing their employees in this way. We live in a world where capitalism is the dominant economic system, so most workers would come to a capitalist business already understanding the basics of what it means to be an employee working for a wage.

But worker-owned businesses don’t have this advantage. They are swimming against the tide of the general capitalist ideology of our society, and so they can’t assume that their employees will fully understand the difference between being a worker-owner of a cooperative and being an employee of a private business. If worker-owned businesses are to succeed they have to constantly strive to educate their members about the philosophy and practicalities of running a cooperative. The pioneers of the cooperative movement clearly understood this and named education as the fifth fundamental Rochdale Principal of cooperative organisation:

Co-operatives provide education and training for their members, elected representatives, managers, and employees so they can contribute effectively to the development of their co-operatives.

In their study, Simons and Ingram also show that outside organizations, particularly banks, can work to force cooperatives to degenerate. They show that the kibbutzim with the greatest reliance on loans from banks were also the fastest to employ outside labor, presumably because their lenders used the leverage of their debts to force them to adopt more capitalist ways of doing business.

In my recent interview with Kateri Gutierrez of Collective Avenue Coffee, she spoke to a similar problem her coop faced when it came to raising startup capital, reporting that investors had approached her cooperative about funding, but that they had turned them away because the investors were not simply interested in loaning them money, but also were interested in establishing outside control their new business.

This is one more reason, perhaps, that individual cooperatives, as well as the worker-ownership movement as a whole, may need to develop new ways to self-fund cooperative start-ups or expansions through some form of mandatory profit plow-back structures. Capitalist banks and investors are not value-neutral; they come with their own ideas of how businesses should be run, and if they loan a cooperative money, they are in a powerful position to tell that cooperative how to do business.

In 2010, Zachary Sheaffer, Benson Honig and Abraham Carmeli published a research article that confirmed and expanded on Simons and Ingram’s findings. They gathered historical data on 171 kibbutzim from the years 1990 to 1997, and using a range of measures of degeneration, again demonstrated that a strong shared ideology is a key feature that protects cooperative organisations against degenerating.

This is clearly then a very robust set of finding, and together, all this research strongly suggests that founders of new worker-owned firms should carefully plan how they will use selection (recruitment) and socialisation (cooperative education) to establish a shared collective ideology in their business that will give them the best chance of succeeding for years to come.