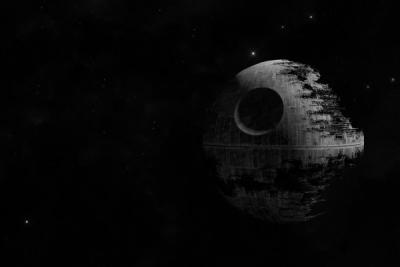 Neal Gorenfo of Shareable did a great job of introducing the upcoming platform cooperativism conference by explaining the rise of Death Star platforms and a counter-proposition that these platforms could or should be run as cooperatives.

I'm dubious about the way in which these horizontal platforms conceive of community. As Gorenfo said,

Platform coops may be able to create a deeper community experience than Death Stars, which routinely feign community ethos for profit.

This is because the 'community' in one of these horizontal platforms is a group oriented around one particular need. Surely the communities we want to be modelling and supporting with our solidarity architecture are local, meatworld, communities?

We should not take it for granted that Death Star platforms should be overcome with another kind of platform. This 'platforms' model of the internet was defined and developed by the monopolistic, centralised, money-hungry forces, so maybe we should be a bit more open to other ideas about the social web architecture we want?

I've been working on a platform for 7 years, but the idea that it had to take over the world never occurred to me. Local community groups want simple platforms that manage their identity and relationships and data in one place that they trust i.e. under local control, and to plug in globalised 'features' that enhance their community life but while giving them a degree of privacy.

Local hubs need to connect to global services through open APIs. Many global services like payments, transport and communication do tend towards monopolies and these need to be especially carefully governed.

I've been working on a platform for 7 years, but the idea that it had to take over the world never occurred to me.

Local platforms can then be built using any of several technologies to suit a range of cultural needs. My work is Drupal, but many comparable community platforms exist, like Odoo, WordPress, Joomla, which can be extended in many directions with open source modules. Most communities can find somebody to manage such platforms for them, and they can work together to pool resources. My organisation, Community Forge offers free hosting & support for 140 active communities, some of which donate back to pay expenses. That project became what it is without writing any invoices, incurring any risk or any debt.

These 'local' platforms also need to interoperate - ideally they would all be groups in one massive social network with locally controlled 'pods', as the diaspora project (an alternative to Facebook) has shown us, though it didn't reach critical mass.

I was particularly intrigued, in the article above, to read therefore about GNU social adding a 'module' called GNU BnB. I've been looking out for years for the right decentralised social networking platform which can be modularly extended to connect to web services. Could GNU social be the way forward?

We surely can't raise the kind of money needed to compete with Death Star capitalists. In a saner world, government would be showing interest in making such services public services - financed by the government, and run by the public for the public. Even without finance, we have huge resources in our passion and our desperation to forge a new politics using the devolved power that technology can give us. We are held back because too many of us are too engrossed in our own projects to go lend a hand where it is most needed.

Gorenfo also talked about incubating the templates and deep cooperation. Lets not forget, as we launch a new movement, that cooperatives have been around for 150 years; that existing local communities and grass roots movements like the Mutual Aid Network are struggling with a plethora of disjointed tools; other projects like the Global Ecovillage Network and Transition Towns are investing in highly customised platforms because they don't know what else to do.