This is a first in what I hope will be a series of practical articles about the nut and bolts of setting up a worker cooperative. In this first article, I’m going to take a look at an important but poorly-understood subject: minimum profit plow-back rules.

A key to success? 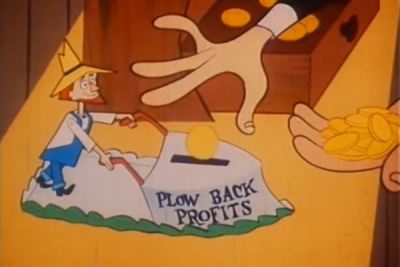 The size and strength of the cooperative sector varies enormously from country to country and from region to region around the world, and while there are all sorts of reasons why cooperatives might be more common in some places than in others, one particular factor stands out: in regions where cooperatives are strong, they often share a particular type of internal financial arrangement called a minimum profit plow-back rule. Indeed, it seems that minimum profit plow-back rules may be behind the success of many of the most well-known cooperative groups, like the Mondragon cooperatives in the Basque country, and the cooperatives in the Emilia-Romagna region of Italy.

Minimum profit plow-back rules help cooperatives raise the capital they need to grow and multiply, and because they accelerate the growth of cooperatives, these rules could prove to be the key to expanding worker-ownership beyond the fringes of the global economy, but unfortunately, it is hard to find much detailed, practical information about these rules in the literature. In this post, I want to share what I have discovered so far. It’s a fairly short post now, and that is a measure of how difficult it is to find information about these structures, but I plan to add to it little by little as I learn more. If you have any information or experience with minimum profit plow-back rules, please share it the comments below.

Cooperatives tend have a capital problem. While capitalist business-owners and entrepreneurs are often very rich, and therefore have access to money to start up their businesses and to expand, worker-owners generally do not have the same access to capital — they aren’t personally rich and banks are far less likely to extend them credit — so they have to find other ways to raise money. A minimum profit plow-back rule is one way a worker cooperative can solve this capital problem for itself over time.

There are all sorts of different ways to implement these structures, but basically, a minimum profit plow-back rule requires a cooperative to save or to reinvest a certain percentage of its profits back into the business each year; in other words, it requires the cooperative to create its own capital reserves. Sometimes these rules are imposed by the state as a legal condition for incorporating as a cooperative, and at other times, like in the case of the Mondragon Corporation, the rules are internally imposed by the cooperative group itself.

By law, cooperatives in Italy are required to plow back at least 30% of their net profits, although research shows that Italian cooperatives often voluntarily plow back much more than this, sometimes up to 100%. These capital reserves cannot be divided between members, even if the cooperative eventually closes shop. This arrangement is usually called an asset lock. (Navarra 2016; Navarra 2009;  Pérotin 2012)

Everyone agrees that Mondragon’s cooperative bank […] was vital to its expansion. The [cooperative bank] mobilized the savings of thousands of depositors and funneled them into the growth of the coops. (Dow 2003, 65)

The Mondragon system is constantly evolving, but according to the best information I have just now, the Laboral Kutxa requires all of the Mondragon cooperatives to set up three streams of profit plow-back. Net profits (after wages) are divided between a social fund (10% used to fund community social projects), a collective capital reserve fund (a minimum of 20% for direct profit plow-back into capital reserves), and the remainder is deposited in individual workers’ capital accounts. When new worker-owners join a Mondragon cooperative, they have a capital account set up in their name. Seventy percent of the cooperative’s net profit are deposited in these accounts, and the members can withdraw this money when they retire, but in the meantime, the Mondragon system is free to use this money as investment capital. (Dow 2003, 60-1)

The power of the Mondragon system is that, because they all share their own bank, all these capital reserves get pooled together in the Laboral Kutxa (Caja Laboral) and can be used as capital to start new cooperatives:

The main purpose of the [cooperative bank] was to finance the creation and expansion of worker cooperatives and other cooperative organizations. (Whyte and Whyte 1991, 52)

Suma Wholefoods is remarkable as a fairly large worker-owned cooperative in the UK that maintains a perfectly flat pay structure: everyone earns the same wage per hour, and in the 80s, Suma apparently implemented an interesting form of profit plow-back based on wages. They set up a cooperative development fund to help aid other cooperatives, and every time they voted themselves a pay raise (pay rise), they would deposit an equal sum in the development fund. (Parker 2018, 117)

These sorts of structures are definitely worth considering if you are founding a worker-owned firm. Rarely would founders of a worker-owned cooperative be thinking much about future profits as they are setting up their business; they may expect to struggle for months or even years just to break even, but these structures would be much easier to build into the design of a cooperative from the start. Then, when the business finally does first turn a small profit, the structures would be firmly in place and fully agreed.

Also, as the cooperative movement as a whole lobbies to have worker-cooperatives better recognized in corporate law in jurisdictions around the world, it would be worth building minimum profit plow-back into this legislation, mandating this structure in the design of worker cooperatives as it is in Italy and elsewhere.

Pérotin, Virginie (2012). “The performance of worker cooperatives.” In P. Battilani and H. Schroeter (eds.) A Special Kind of Business: the Cooperative Movement 1950-2010… and Beyond. Cambridge: Cambridge University Press, 195–221.