The Cooperative Movement Needs To Hear Your Voice

Here at GEO, our Scaling Up the Cooperative Movement ebook has been flying off the e-shelves. It would appear that a lot of people are interested in what it's going to take to create a cooperative economy that can provide an alternative to our traditional ways of doing business.

With money now flowing into cooperative development, we need to ensure that the people who have been engaged in this work since before it was cool are being consulted...

New York City and Madison, Wisconsin have recently allocated money from their city budgets to assist in worker co-op creation, Richmond, California's mayor is a vocal co-op advocate, and even the Federal Small Business Administration has recently become more open to working with worker cooperatives.  Cities across the country are showing interest in replicating Cleveland's Evergreen cooperative model.  It would appear that worker co-ops' fifteen minutes of fame have finally arrived—now it's up to us to make sure we use this moment to the fullest.

That's why we created the Scaling Up theme and ebook, and it's why we're now preparing to begin work on a second volume, this time featuring the voices of worker-owners themselves.  With money now flowing into cooperative development, we need to ensure that the people who have been engaged in this work since before it was cool are being consulted and listened to.  All too often, worker-owners' voices are given short shrift in policy discussions, while the ideas and opinions of academics and professional developers tend to predominate.  This is partially a matter of practicality, as worker-owners have businesses to attend to, while discussing and debating social policy and large-scale strategy is what academics and developers are paid to do.  In a sense, then, it's only natural that worker-owners get heard less than developers, academics, and other allies in these discussions. 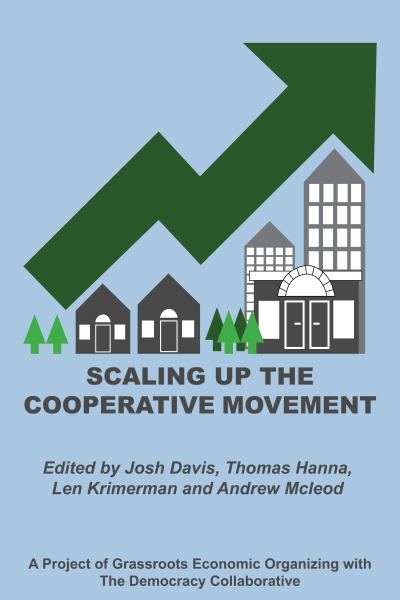 But this dynamic is a dangerous one—one that if left unexamined and uncontested threatens to recreate the social and political hierarchies that cooperative enterprises have historically sought to change.  The major underlying thought behind cooperative economics, at least to my mind, is that bottom-up, democratic decision-making is not only a more humane and just way to run a business (or a society), but that it also leads to better decisions overall— as the success rate of co-ops versus conventional businesses would seem to bear out.  It is this insight that is the guiding genius of our movement.  How paradoxical would it be, then, in the moment when our star is ascending, to revert to top-down, hierarchical decision-making?

It is in an effort to counteract this natural tendency for “higher level” discussion and decision-making to become a rarified sphere (seldom breached by actual practitioners of workplace democracy) that GEO is seeking input specifically from worker-owners for Volume 2 of Scaling Up the Cooperative Movement, tentatively titled The View from the Trenches.  Here are a couple of questions we’d like to have worker-owners answer:

We welcome contributions from individual worker-owners, but we'd also like to suggest that whole co-ops chime in.  Pose the questions above to your cooperative at its next owner meeting and see if the group can come up with a consensus on what the movement needs most right now.  Don't worry if you don't think of yourself as a writer, that's what the GEO editorial collective is here for: we’ll provide constructive feedback and suggestions.

Submissions don’t need to be long: anywhere from 800-1500 words is plenty.  Send an email to editors@geo.coop if you're interested in contributing.

We're looking forward to hearing from you.  The movement needs your wisdom now more than ever.

Josh Davis is the Content Manager for GEO.  He lives, works and cooperates in beautiful Missoula, MT.