Reflections on "A Letter from Mondragon"

In a "letter from Mondragon", recently published by on the Cincinnati Union Co-op Initiative (CUCI) website, Armin Isasti, makes some incisive and thought-provoking observations that I think we in the worker co-op movement would do well to consider.  Below are some quotes from his letter along with my thoughts and comments.

After quoting Fr. Arizmendiarrieta on the need "to participate and act from our humanity in order to contribute to transforming the economy and [creating] a new socioeconomic order," Isasti calls on cooperators to rethink what cooperativism is:

Cooperativism needs new forces, new points of view, new imaginations; in other words, it is necessary to rethink cooperativism so that the cooperative movement can reach other parts of the world...

Here, I read "world" as meaning not just different geographic regions around the globe, but different parts of our own little "local worlds" — the communities, neighborhoods and cities we already inhabit.  Surely, there are other parts of these little worlds, other people in them, that could also benefit from cooperativism...and from whose solidarity we might also gain.

He then details three personality characteristics that he believes are important for cooperators to have:

To be a cooperativista, there are — in my experience — some very specific, important elements that go far beyond knowing the 10 cooperative principles.

The first element is a willingness to sacrifice a part of ourselves. 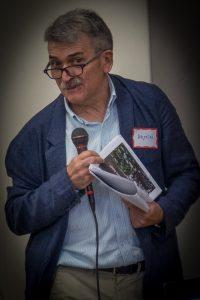 Isasti does not go into detail here, other than to say that cooperativism is a more demanding career than most. For my part, I think in general we misunderstand sacrafice as a variety of self-abnegation or masochism.  But if that were the case, sacrafice would have nothing to recommend it.  In fact, when we talk about sacrafice we are almost invariably talking about the letting go of one thing in order to take hold of something else of greater value.

This becomes abundantly clear in the extreme cases of religious or spiritual devotion where a person will "sacrifice" their material possessions and attachments as a means of attaining inner peace, enlightenment, sainthood or the like...which they hold in much higher esteem than any material possessions or worldly attachments.  They are not sacraficing in the normal sense, then, so much as they are exchanging the lower for the higher — which one hardly wants to call "sacrifice" at all.

Even if we do not go to the extreme of monastic renunciation, the same principle applies to smaller sacrifices.  Yes, we may have to "sacrifice" some of our perceived autonomy, or our desire to always get our way, in order to become a "true cooperativista," but isn't the cooperative economy and society that we are trying to obtain worth so much more than any of that?

The second element of cooperativism is the constant development of people from all levels of the organizational structure, building their knowledge, values, and skills. In cooperativism, constant study and reflection are essential for facing a constantly changing world.

Education is another, I think, largely misunderstood concept.  We tend to think of education as uni-directional, as a stream of information flowing from teacher to student.  However, if education is purely uni-directional it will also be hierarchical — those who teach will naturally be seen as higher than those who are taught.  We can avoid this trap by affirming that all people at all levels of our organizations — from the finance manager to the janitor — needs to be constantly building their skills and their knowledge.  This means that everyone must be committed to learning, constantly, from whoever has the capacity to teach.  We tend to focus on what the accountant can teach the housekeeper, but almost never consider what the housekeeper might have to teach the accountant.

Reflection is another thing I don't hear much about as a practical part of running a worker co-op, but I think it's incredibly important (although, granted, I think reflection is an incredibly important in literally every aspect of life).  Of course, if we don't first listen to one another and take each other seriously, we won't have much of anything to reflect on.  Having a keen ear for feedback, and welcoming it even — or rather especially — when it is difficult to hear, when it rubs up against our egos ("a willingness to sacrifice a part of ourselves") is of paramount importance in both personal and organizational development .

To be a cooperativista also requires a third important quality: frugality. Do not consider cooperativism as a means to make oneself rich. If wealth is the goal, there are other professions that allow one to earn much more money, and more quickly.

This one I particularly like.  In our present consumerist society, with its innundation of advertising and glorification of wealth and largesse — along with its disdain for those who cannot afford to participate — frugality is an almost alien concept, and rarely mentioned as being among the cheif virtues.

Frugality is, in some ways, the mirror image of philanthropy.  Whereas philanthropy is measured in the amount that one gives away to other people, frugality is measured in how much one keeps for oneself.  Hence, Bill and Melinda Gates might be considered among the most philanthropic people in the wold, on a pure dollar basis, but would never be accused of being the least bit frugal.  Making frugality a virtue just might be, now that I think of it, the most radical anti-capitalist position a person could take — seeing as how capitalism is predicated on everyone trying to get as much for themselves as possible, while frugality demands that each person try to take as little for themselves as they can manage.

But the point of frugality isn't simply to engage in asceticism for its own sake.  The point is to free up as many resources as possible to continue building our new, just, solidarity economy and cooperative society.  If everyone is trying to minimize what they take for themselves from the communal stores of wealth, more of that wealth will be available to use for projects that will benefit everyone.

The secular value system of our current society views with approval 1) the piling up of personal wealth, and 2) the philanthropic sharing of some portion of that wealth with those who haven't managed to pile up as much as you have.  Number 2 is, of course, a purely personal — and entirely optional — step, and those who only succeed in number 1 and refrain from engaging in number 2 are not generally viewed as having acted unethically on that account.  However, if we were to put frugality at the head of our value system, the amassing of personal wealth would be seen as a failing, not a success, and the ability to engage in philanthropy might be seens as a sign that one was is being insufficiently frugal, since one has such largesse to toss around.

Again, as with any sacrifice, we should remember that whatever we think we might be giving up by adopting a more frugal way of living, what we stand to gain in return is so much more valuable than what current society has habituated us to desire.  Personal frugality is a means to communal wealth, which is what we desparately need more of in our world, and which will serve all of us better in the long run than individual stores of wealth ever could.

And to connect frugality back to education, I'll just point out that if you would like to learn about frugality, ask someone who works for low wages or who lives on SSI or disability payments.  This is one obvious place where the poor among us have a lot teach the rest of us.

Here's hoping that some of us will take Isasti seriously, and really try to cultivate the qualities that his 48 years of experience have lead him to value.  Here's hoping that we take the time to reflect, and that we have the courage to act on those reflections so that we will be living out our values, not  as Isasti puts it, "merely talking about the virtues and benefits of cooperativism."

There's much more in Isasti's letter, which you can read here.