On Paul Mason's Visions of Post-Capitalism

The Guardian ran an “article” by Paul Mason entitled The End of Capitalism Has Begun. A great deal of the message resonates with the GEO Collective’s core beliefs and we certainly aren’t interested in denying the potential value of democratically organized, worker/member directed initiatives, institutions, and enterprises. We strongly endorse and promote the federation and inter-co-op collaboration somewhere at the heart of Mason’s Post-Capitalism. 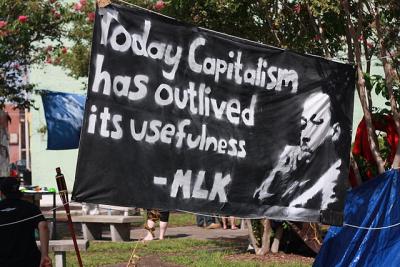 That said, we worry that such Utopian and Romantic visions, without concrete political, economic, and social foundations tend to distract from the real and immediate challenges of “the movement.” Bringing down the Capitalist/Financialist “New World Order” is a lofty goal. Putting food on the table and paying for water in Detroit is much more immediate. The former is a grand call to action for Academia and the Non-Profit Industrial Complex. The latter, a pressing and urgent problem to be solved by some (or all) in pretty much every community, everywhere.

To understand why speculations about the "logical and obvious endpoint" of adoption of co-operative (solidarity, etc.) principles are a diversion, first we have to recognize that the theories and policies that take shape will be molded by the people and ideas that carry this work forward. It is unlikely that some prescriptive vision from within the old, entrenched system (even by a very avant garde thinker) will emerge from the rough-and-tumble in anything like the original form. Second, what we know today as "Peer Production" (collective contributions to "The Digital Commons") gives us fragmentary glimpses of what might be if some more co-operative and less exploitive foundations were to be built.. Our current experience is dominated by Corporate Capitalism. Theorizing from such immersion we need to start by looking at the real differences between Capitalism and the co-operative impulse. Then we can better understand how to deal with these Utopian thinkers.

The Rochedale Pioneers sprang from poverty and exploitation and went on to construct a respectable local Solidarity Economy. Robert Owen and many who have followed in his footsteps, built a concrete enterprise as the expression of his Utopian dreams. The enterprise was designed to succeed in the real world. The difference between Owen and those who follow his precepts and Henry Ford or Thomas Edison is not in the intent to succeed in the formation of a viable and productive (profitable) enterprise. The difference is in the intent to do so by forming that enterprise around democratic principles and an economic theory radically different than the prevailing Capitalist/Financialist extractive (rentier) model.

Where a General Electric or a Google is “founded” by entrepreneurs who expect to reap huge personal rewards, the true story is very different. The entrepreneurs (“founders”) seek Capital from Financiers (Venture Capitalists) as funds to pay themselves and their employees and their various vendor/providers. The “funding” is really the sale of a significant portion of the shares in the business to the Financiers who expect to profit proportionately to their percentage of the “Capital Value.” Any firm on such a path is majority-owned and controlled by “The Money” (the Financiers) from a fairly early stage in its growth.

Shares, whether held by the original Financiers or by others who purchased them later, are a permanent claim on the enterprise. It must either grow in Capital Value (so investors can sell shares at a profit), pay out dividends on each share, or both. This notion of the responsibility to “maximize Share-Holder value” has become canonized if not in law, in practice.

Shares of this type imply “ownership” and putative “control” but the holders of such shares rarely exercise much, if any, oversight of the managers operating the company. However, for reasons of tradition and of Capital’s need for adherence to the exploitive practices, hierarchic (pseudo-monarchic) management structures are the norm. Decision-making is top-down and heavily influenced by the Financiers in the top layers of Global Finance.

Contrast this “Capitalist” model with the Co-Operative model often attributed to the Rochedale Pioneers. The “purpose of the firm” is similar to the Capitalist ventures but governance of the firm is democratic. Ideally, workers (management and all others) have an equal say. Where the co-operative is founded for the collective benefit of its customers, they govern its operations (hopefully incorporating the firm’s workers into the democratic governance and equity/value sharing on an equal footing). Profits not necessary for reserves for future risks and needs are distributed based on “patronage” (to members) and/or “contribution” (to workers) or both. There is no expectation of automatic “returns on investment” other than through the successful operation and then in recognition for participation, not passivity.

There are troublesome issues around the distribution of “owner’s equity” and the “cashing out” of those wishing to leave the co-operative. There are various models which avoid temptations to sell such “shares” to Capitalist-minded investors wishing to convert the co-operative to a Capitalist business. De-mutualization, like the recent conversion of the Co-Op Bank in the UK to a Capitalist firm, is unavoidable unless the membership and its appointed leadership take appropriate steps from the formation of the venture.

Note, however, that the economic model of the two forms (Capitalist/Rentier and Co-op) are quite different. Because the Co-op is democratically governed and it is actually under NO obligation to pay out profits, the workers and/or members can choose to invest in themselves (the firm.) There is no legitimate outside interest(s) that can insist that such investments be diverted into other channels of no “value” to the membership. The co-operative form frees workers and/or members from the dictates of Financiers with “passive interest” in extracting wealth.

That said, Mr. Mason’s Utopian Argument is based on the amusing but specious discussion of some mythic Peer Production political economy (details to be worked out later). In the proposed system the production of “Information” (Ideas) supplants the production of real goods and services and forms the (unexplained) basis of the new economy. Oddly, there is more than a little rhetoric around Stewart Brands’s “Information Wants To Be Free” from the Whole Earth Catalog days. If memory serves, the book wasn’t free but that’s niggling.

Information doesn’t “want” anything. It just “is.” If in the public domain (is widely known and unencumbered by Patent or Copyright restriction), it is only marginally commercially useful. Some can make a business ensuring better distribution (information is virtually always unevenly distributed, even when “free”.) Vast oceans of such information wash about in the libraries and on the Internet (Project Gutenberg or LibriVox), for example. Most of it goes largely unnoticed and unused. The collection of highly duplicated contributions on Facebook, as one example, may be large, but once you reduce it to the truly unique, it is a great deal smaller.

Gutenberg and Librivox (and Mason’s Wikipedia) are all heavily sponsored by contributions from various private, charitable, and commercial parties. Most of the “Digital Commons” of the Open Source Software community is paid for by such sponsors (for less than artistic reasons for the most part.) Facebook and its ilk are sponsored by advertisers, just like our Commercial and Corporate-owned (and controlled) media. Even “progressive” outlets seek such funding to help pay workers and suppliers.

The Peer Production and Digital Commons activity are thus dominated by financial support of the Capitalist majority. The academic, building the amazing new software innovation or the private person, working in his off hours, are the minority among a majority directly paid or sponsored by the likes of Intel, IBM, HP, Red Hat, Cisco, Microsoft, and the other giants of technology who are the ultimate beneficiary.

The “Open Source Software,” licensed under truly “Open Source Licenses” without restrictions on use or distribution, are of no significant commercial value. Anyone with a little initiative can get a copy for free and put it to use (if they have the relevant and necessary skills and equipment.) This great “Digital Commons” offers no opportunity for compensation for the work of developing what is then published “for free.”

Mason, like Bauwens of the Peer to Peer Foundation, claims promise in this new production model without helping us understand how the worker in that “workplace” extracts the value from her efforts. Certainly, there are business models available to generate revenues from the deployment and maintenance of such “free software,” but that necessarily needs to produce sufficient profits to continue to pay the developers whose work is otherwise “without value.”

It is this deep disconnect that makes Mason’s (and Bauwens’s) hopeful vision hard to support. GEO works hard to convince entrepreneurial “co-operators” to form enterprises around legitimate business opportunities. Co-op formation is indistinguishable from Capitalist business formation other than governance and “funding” issues. A business has to pay its expenses, those that work within it, and its debt and future capital requirements. Ultimately, the business plan for each is similar with those caveats.

Do we of the GEO Collective believe that adoption of Co-Operative business principles can contribute to the emergence of a political economy very different than today’s Corporate, Financialized Capitalism? Yes!

But I am certain that we must first learn to co-operate, to become owners in our own enterprises, and to federate among like-minded co-operative institutions. And that sense and the lack of a concrete and credible economic and political alternative leave me concerned that initiatives painting grand visions without such foundations just raise wan hope with no pragmatic foundation.

For more thoughts about the Co-operative difference, Building Co-operative Power by Cornwell, Johnson, and Trott contains three relevant chapters. Chapter 4, 7 and 8 describe the regional strategy the Valley Alliance for Worker Co-operatives has evolved to address this problem of invisibility, and the work on the ground to implement it. Chapters 5 and 6 spell out how co-operative economics is rendered invisible in our society and how that invisibility poses challenges to the advancement of a co-operative economic sector.