How Much Should Cooperators Make?

There is a problem with corporate governance at traditional capitalist firms that often goes unmentioned in discussions of our current social and economic ills. It's a problem that I have reason to believe also effects some of our largest co-ops. It is a perverse dynamic that has lead to extremes of income and wealth inequality, and it is all the more pernicious for being largely invisible. (I'm going to have to dive into the weeds a little bit to get to where I'm going, but stay with me and I promise you, this will come back around to co-ops.)

It's often stated by business people and media pundits that the sole responsibility of corporate management is to “increase shareholder value.” Apologists for capitalist corporations, as well as those who oppose them, both implicitly accept this formulation of corporate purpose and responsibility. However, this formulation has no basis in reality. Legally, corporations have many obligations to uphold, and the obligation to pay shareholders a dividend, or “maximize their value,” isn't even on the list!

Corporations, like all businesses, have a legal obligation to abide by all laws, regulations and licensing requirements; pay local, state and federal taxes; pay creditors like banks and bondholders; and pay employees and suppliers. After all that is accomplished, and if the executive management deems it appropriate, then shareholders can take their cut. As Yves Smith of the Naked Capitalism blog has explained many times, stock ownership is a residual claim on assets—i.e. whatever is leftover after everyone else has been taken care of. And even then the shareholder has no legal right to demand anything. As Smith puts it:

...a share means “you have a vote that we the company can dilute whenever we feel like it. And we might pay you dividends if we make enough money and are in the mood.”

Equity holders are at the bottom of the obligation chain. Directors do not have a legal foundation for given[sic] them preference over other parties that legitimately have stronger economic interests in the company than shareholders do.

So unlike the typical framing, which views shareholder's as the owners of a company, and the corporate management as their representatives--acting on their behalf--the truth of the matter is quite the reverse. In practice, shareholder's can exert little control over management, since if they don't like the direction a business is going, the usual recourse is to sell their shares to someone else. Attempts by shareholders to force corporate management to implement particular policy reforms rarely succeed. Again, Yves explains:

Once in a while, a company is so abysmally run that an activist investor will take up a proxy fight. But that dog seldom catches the car; instead, they might get a bad CEO to exit or force a restructuring. The stock trades up and the rabble-rousers take their winnings and depart. More polite efforts, even by large, powerful shareholders, are much less effective. For instance, some major institutional investors met with Goldman to object to the idea that the firm would pay lavish bonuses for 2009. The session appears to have had no impact. [emphasis added]

So the question becomes, if the shareholders of a company aren't in control of the actions of that company, who is? The answer, unsurprisingly, turns out to be the corporate managers themselves. The evidence of this is to be found in the out-sized salaries that are paid to our corporate executives.

And here is where we finally come back around to co-ops.

Carl Ratner's recent article, The Corrupting Role of Corporate Co-ops, received a number of responses, both positive and negative. Some dismissed Carl's concerns as misplaced and pointed to vague definitions and a few fact-checking errors as enough reason to disregard his concerns. Others have expressed gratitude that GEO is willing to publish these critiques, uncomfortable though they may be. One thing in particular that struck me in reading the article was CHS Inc.'s CEO, Carl Casale's, salary: $6.4 million for 2013 alone!

Carl quips in his article that this is “hardly a cooperator's salary” and I have to agree. I find it rather difficult to believe that anyone, cooperator or not, can actually earn (as in create value in excess of) $6.4 million dollars in a single year. And not only does CHS's CEO receive out-sized remuneration for his services, but most of the executive team receive compensation packages in excess of $2 million dollars per year! Combined compensation for the top six executives in 2013 was over $17.5 million!

Keep in mind that the median salary for the US in 2012 was $51,000. In order for Casale to actually be earning that salary, we would have to assume that he is creating over 100 times as much value as the typical American. One wonders when the man finds time to eat, sleep or carry on with any of life's other biological requirements. 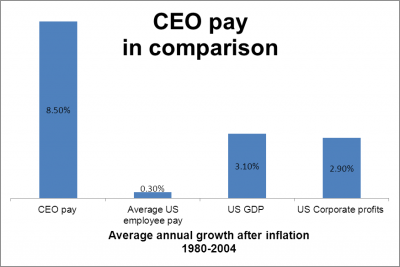 Of course, the typical response to this sort of critique is that corporate managers possess a very specialized skill set, and that in order to attract the best management talent a company needs to offer executive compensation in-line with industry competitors. This argument, however, is entirely specious. It asks us to assume that certain people among us are super-human, with powers and abilities that not only do the rest of us not possess, but that we couldn't even acquire if given the opportunity. This is obvious nonsense. I would bet dollars to doughnuts that Casale's secretary, or any number of CHS employees, could be trained to adequately fill the CEO role at CHS, and would do if for much less pay.

And recent research has proven that not only do corporate executives not possess super-human management abilities, but that paying them as if they do is actually counterproductive. To wit, a recently released academic study found an inverse relationship between CEO pay and stock and accounting performance: the more you pay your management, the worse they manage your company.

So, if corporate executives like Casale don't possess god-like managerial abilities and paying them un-godly salaries actually harms their performance, why do companies--especially cooperative companies like CHS--continue to pay them? My guess would be that, just like in capitalist corporations, CHS's executives are taking advantage of their privileged position within the company to pay themselves much more than they are worth, regardless of the interests of the owners. The fact that they may not see things in quite this manner, nor have any particularly ill intentions, does nothing to detract from the fact that their current salaries are an un-neccessary drain on the cooperative's resources—resources that could instead be returned to cooperative owners or used to address the numerous safety violations at CHS facilities, at least one of which has resulted in the death of a CHS employee.

One commenter on Carl's piece insisted that CHS should be compared to its capitalist counterparts and judged on that basis. However, I think this is letting CHS, and ourselves, off too easily. Our benchmark should not be the destructive and inequitable capitalist corporations that are currently running roughshod over the planet, but rather our own cooperative exemplars—corporations like Mondragon, for instance.

At Mondragon, the worlds largest worker cooperative, the executives are limited to making 6.5 times the amount of the lowest-paid worker. If that same rule were applied to CHS, their lowest paid employee would have to make $1 million dollars a year! This should give us some idea as to how outrageous the salaries being paid to CHS executives really are. The executives at the largest cooperative in the world are doing just fine receiving a fraction of the money that executives like Casale reel in.

If they can do it in Spain, I don't see why we can't do it here. If paying corporate executives reasonable salaries works at Mondragon, I bet it would work just as well at CHS.