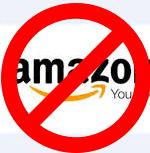 One of the many topics that came up for discussion at the recent GEO retreat was whether or not we wanted to participate in Amazon's Smile program.  The program lets shoppers support the charity of their choice through purchases on Amazon's website. Amazon donates 0.5% of eligible purchases to a shopper's selected charity.

The GEO Collective didn't bite. Why?

The first and most important reason is Amazon's atrocious labor practices. As the Los Angeles Times reported in October of 2011:

Workers said they were forced to endure brutal heat inside the sprawling warehouse and were pushed to work at a pace many could not sustain. Employees were frequently reprimanded regarding their productivity and threatened with termination, workers said. The consequences of not meeting work expectations were regularly on display, as employees lost their jobs and got escorted out of the warehouse.

During summer heat waves, Amazon arranged to have paramedics parked in ambulances outside, ready to treat workers.

And things haven't gotten any better in the last three years. In a recent article on the Guardian website, former Amazon “order-picker” Nichole Gracely summed up her experience working in an Amazon warehouse this way:

I am homeless. My worst days now are better than my best days working at Amazon.

As proponents of the Solidarity Economy we could not, in good conscience, encourage our readers to patronize such a company.

And not only are the labor practices of this corporate behemoth contemptible, the measly amount they offer to non-profits for participating in their program is laughable. One half of one percent—that's what Amazon is offering GEO, and every other non-profit, in return for providing advertising for one of the largest retailers in the world! 0.5%!

We'd rather our readers just send us $10 directly and cut out the middle-man.

Let's do a little math and see how ridiculous that offer truly is. One percent of $100 is $1, which means half a percent is 50 cents. Spend $200, and the charity of your choice gets a buck. So, in order to get $10 from the Amazon Smile program, GEO supporters would have to spend $2,000! And in exchange for this paltry sum (some might even call it insulting) GEO would be encouraging all of our readers to spend their money at one of the biggest abusers of workers in this country. We wouldn't make that kind of deal with Walmart and we won't make it with Amazon. Really, we'd rather our readers just send us $10 directly, and cut out the middle-man, instead of spending two grand at Amazon to accomplish the same thing.

Unfortunately, many organizations in our movement have taken the bait. I've been saddened to see a number of appeals from Cooperative/Solidarity Economy groups in my email in-box, encouraging me to do my holiday shopping at Amazon so that their group can get one-half-of-one-percent of my purchases (well, “eligible” purchases...whatever that means). And even if I did decided to do my holiday shopping at Amazon (which I won't), how would I decide which alternative economics group to give that 0.5% to? These appeals make me question whether or not, and to what extent, some people in our movement really understand what “solidarity” means.

Amazon's business model isn't anything to smile about, and we shouldn't let a clever advertising campaign make us forget that.

So this holiday season, GEO won't be doing the Amazon Smile, and I hope you won't be either. And if an organization that you otherwise support sends you an email encouraging you to shop at Amazon and give that half-of-a-percent to them, please let them know that you think they're acting in error. Amazon's business model isn't anything to smile about, and we shouldn't let a clever advertising campaign make us forget that.

Discaimer: The Amazon Smile logo, is  a trademark of Amazon.com, Inc. Its use is not authorized by, sponsored by, or associated with the trademark owner and is used here under fair use guidlines.