It's been an interesting couple of days. 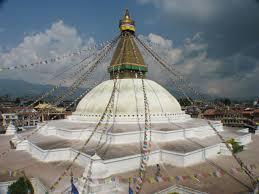 On Sunday, I traveled from Bhaktapur to Kathmandu to visit a friend who lives and studies in the Boudha neighborhood, surrounding the towering Buddhist stupa of Boudhanath. The buses were especially packed that morning, due to the on-going Indian fuel blockade and the resulting dearth of public transit vehicles on the road. But Nepalis are nothing if not good at making the best of a bad situation, so we all got nice and cozy for the bumpy, hour long ride into the city.

That afternoon Ang and I were sitting cross-legged on the floor of the main hall of the Rangjan Yeshe Institue and Monastery, listening to a dharma talk by a youngish Rinpoche whose name escapes me. It was a good talk, informal in tone, focused, it seemed, mainly on conveying the point that practices like meditation and chanting mantras were not enough for a person to become a true dharma practitioner—constant self-analysis and reflection are even more important.

The next afternoon I was sitting in a tiny local tavern, sipping tongba, and taking the occassional puff of flavored tobacco from the hookah in the middle of the table (Tongba is an alcoholic beverage made by pouring hot water over a cup full of fermented millet, from whence the resulting—delicious—liquid is consumed via a steel straw, specially designed for the task). Earlier, my friend Hira had kicked my butt at the snooker table in the room next door, while joking with the proprietor about finding me a wife. From the monastery to the pub in just one day—I was definitely covering all my bases...

Hira works at a “manpower agency,” supplying workers to, mostly, Malaysia. They are what old union organizers used to refer to as “labor sharks.” Essentially, these agencies operate as the middle men between Nepalis looking for employment overseas and the businesses looking to hire them. For about $500 (Rs. 50,000), a Nepali citizen can purchase the right to a work visa and a job in Malaysia, Qatar, Saudi Arabia, Kuwait or various other countries in East and Southeast Asia and the Middle East. Over half of all Nepali families have at least one family member working abroad.

Hira says he feels a little bit bad about working in this field, taking money from people to send them to what he knows are not great jobs. But, as we say in Nepal, what to do? The arcane migration regulations are designed so as to require agencies like Hira's to exist, and the options for payed employment inside the country are few and far between for anybody without good family connections. This unfortunate situation provides opportunities to meet the demands coming from the government, the people, and foreign employers.

It is, of course, a kind of human-trafficking—although a legally sanctioned, not to say required, kind. Hira and the workers whom he processes are integral parts of the machinery of modern, globalized production and consumption. Parents being separated from their children and spouses for years on end, enduring substandard and often exploitative working conditions for a few hundred dollars a month—this is what it takes to provide the world with cheap t-shirts and jeans.

Not all the jobs overseas are horrible, however, and my friend Gorkha seems to have worked himself into one of the better ones. After a terrible first experience working in Palau, Gorkha got a job as a salesman in the giant clothing retailer H&M in Kuwait. With his handsome features, friendly demeanor and superb salesmanship, he was soon promoted to a management position. He brought his wife with him to Kuwait where she got a part time in a copy shop. His young son, however, had to stay behind with the grandparents.

While Gorkha's pay is good by Nepali standards, and his working conditions are excellent compared to his countrymen working as factory labors, even his relatively good job is not without its serious drawbacks. I got to meet Gorkha during this trip only because he has been transferred to Saudi Arabia and so had to return home to get a new work permit and change his documentation. While he works on the paperwork here in Kathmandu, his wife is still in Kuwait. Since he was her sponsor to come to there, she'll be moving as well—although how long it will take to get her paperwork completed is anybody's guess.

We talk about all this while we drink tea and discuss the tourism business, the fuel blockade, the state of Nepal and the world in general. Just another day in the life of Nepal.

Linking the Global and the Local: Seikatsu's Vision