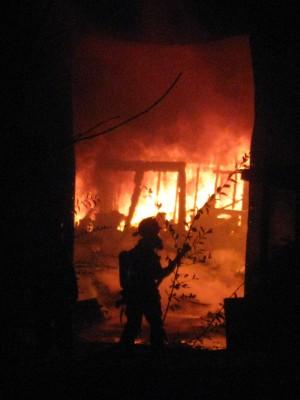 In 2013 Acorn Community suffered fires to two of their buildings. The first was an accident in their steel building, home to their auto shop and clothing storage, among other things. Several barrels of different kinds of fuel ignited, destroying everything inside. The second was an act of arson to their main residential and office building in the middle of the night by a disturbed guest. The fire was put out quickly and no one was seriously injured, but considerable damage was done to several rooms. These damage from these fires was about $125,000 and represented a huge number of person hours to repair.

Acorn, started in 1993, is in Louisa County, VA. There are 3 other intentional communities in the county, Twin Oaks (1967), Little Flower Catholic Worker (1998), and Living Energy Farm (2012), and a couple more within 100 miles. There's also a substantial community of ex-members of all these communities living in the area. There are also a number of ex-members of one community now living at another community in the area. 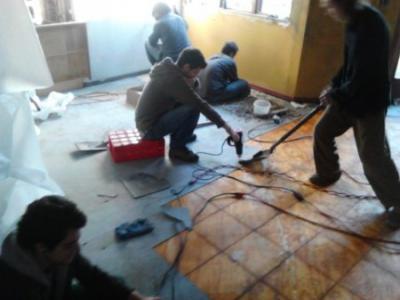 When the fires happened the outpouring of support, emotionally, financially, materially, as well as in volunteer labor was tremendous, and the benefits of having a connected group of communities became wonderfully apparent. The three nearby communities donated considerable labor to clean up and repair efforts. There is also a labor exchange agreement between these communities so that any labor Acorn needed beyond what was donated could be done then and worked off later. Shannon Farm (1972), a community about 75 miles away collected $2,000 in donations. A number of individuals made donations of clothing and equipment donations were made to replace what was destroyed. Acorn (along with Twin Oaks) is also part of the Federation of Egalitarian Communities a small but national network of groups that, among other things do labor exchange. Seven members of East Wind Community in southern Missouri trekked 1000 miles to come help with the rebuilding effort. 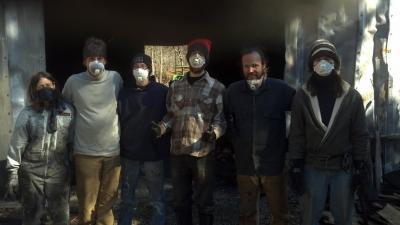 There are numerous ongoing benefits to having a cluster of communities. Labor exchange is a regular thing between the communities, which means there's more people around, with more skills and more person power. There's a standing open invitation to most social events at one community to people at the others, as well as to the extended ex-member community. Dating between communities is somewhat common, and often it's possible to be a dual member. People sometimes move from one community to another if they figure out that the other one suites them better. There's also an outreach benefit. Someone who finds out about one community invariably finds out about the others, and people often end up visiting more than one.

There's a similar cluster of communities in northern Missouri: Dancing Rabbit Ecovillage, started in 1997, with a strong education focus and firm ecological covenant, Sandhill Farm (1974), which makes food products as it's primary income source, and Red Earth Farms (2005), a collective of homesteads practicing extreme self sufficiency. Similar labor exchange arrangements exist, there is local currency between the communities, and a number of products made in the different groups are sold or bartered between them.

What is perhaps most notable and important is that both community clusters have regular ultimate frisbee games attended by members of different groups.

These community clusters are providing a model of grassroots economics. Each community, which range in population from 10 to 100, has it's own collectivized form of economics, usually including both money and labor in their accounting, with land (and sometimes other resources) held in common. The combined population of the cluster in in central VA is about 200, which is doubled if you include the ex-member population, and total operating budgets of well over $1 Million with assets in the several millions. The communities engage with each other in ongoing and one-off economic arrangements, both formal and informal. Association by individuals or between groups is voluntary and based on mutual aid.

One of my jobs at Twin Oaks is managing the Communities Conference. We have a rustic conference site where we've been hosting this gathering for 20 consecutive years. While it serves as one of, and certainly the most consistent conference for the intentional communities movement, hosting it is a labor of love for Twin Oaks, which has often done little more than break even on the event, not including the approximately 1000 hours it takes to run it. What this means is the community has often been hesitant to invest much money in maintaining, much less improving the site.

This year I wanted to do some work upgrading the infrastructure. I'd worked hard last year to make sure attendance was high (about 200 people, the most in at least 10 years) to help justify the expense. I ran a crowd-funding campaign, using the Fellowship for Intentional Community as our fiscal sponsor, and kicking it off with a donation from the Federation of Egalitarian Communities of $1000. Twin Oaks then matched the $6000 I was able to raise. The primary project was to expand and re-equip the kitchen, which had mostly fallen into disuse. The cooking for the event and been moved to the main community dining hall for the previous few years, which was inconvenient for the conference and high impact on the community. 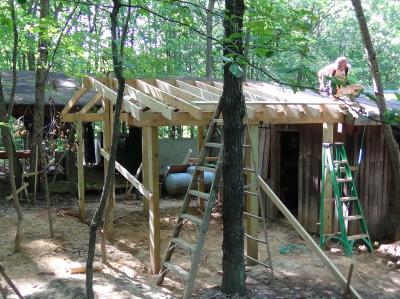 I hired an ex-member of Twin Oaks from the 80's as the project manager. She'd been living in Louisa County ever since she left and now works as a General Contractor (she'd also been hired by Twin Oaks as the General Contractor to expand the production facility for it's tofu business). The main builder on the project was also an ex-Oaker, who recently had moved to a newly formed off-shoot community of Acorn called Sapling. Sapling is a small group, and having her doing labor exchange for Twin Oaks means they'll be able to call on Twin Oaks labor in the future. It meant much lower labor costs for expanding the kitchen. It also provided an opportunity for a number of people to learn basic construction skills (a women's construction workshop was organized as part of the building effort).

Watching Nina up on the roof of the kitchen addition, putting the rafters in place, I was struck by the very human and personal implications for putting these important principles of economic solidarity into practice. Upgrading the kitchen would also mean bringing back a central aspect of community to the Communities Conference, cooking together. Soon there will be 200 people learning about cooperative living and working, helping in the kitchen and eating together, and getting to experience community in a space built by community for the purpose of bringing more community into the world.