Transitioning a Private Business to a Worker Cooperative: A Viable Community Development Tool

Worker cooperatives are taking on a leadership role in the community development arena. From the Evergreen Cooperatives in Cleveland to Arizmendi Bakeries in the San Francisco area, worker cooperatives are displaying how cooperatives can provide a successful model for new business ventures that have an embedded social mission. The basis of that mission is that employee ownership empowers the workers to have more control over their work activities, jobs and careers; anchoring them in the community. Employee-owned companies are far less likely to export their business and livelihoods overseas for a one time payoff.

There is great potential for the worker cooperatives model to expand its community development activity in a much different setting. The successful adaptation of the cooperative model as a business retention tool in transitioning the ownership of private businesses to the employees has the potential to provide far more reaching benefits to the communities where those businesses reside.  This creates a sustainable model that is far more efficient and effective than the "smoke-stack chasing" economic development approach of the past.

Existing businesses with a proven track record can attract funding sources more readily then employee owned start-up business ventures, which seem to have "two-strikes" against them when pursuing outside funding. By adding a proven business model, that comes with a successful business, the burden of "making the case" to such funding sources is greatly reduced.

Businesses haven't transitioned to worker cooperatives, because it is "complicated." Owners have found little incentive to sell the company to the employees and external financing is limited. The workers tend not to have the financial resources to purchase the company on their own. Potential capital gains taxes can further complicate matters. The owner may be interested in continuing the business but there is no logical family/ individual successor to the business, or limited outside interest in the operation.  Employees can carry on the owner's legacy and may be the logical acquirer of the business. Assuming that the owner finally arrives at the solution (selling to the employees), how can he or she get around the tax and financing issues?

Doug Beavers and Bill Sagaser, founders and owners of Select Machine, Inc. a specialty parts manufacture in Brimfield, Ohio, were looking to sell their company. They had received purchase offers for the business from competitors, but those offers all included the closing of the local operation and a loss of jobs.  In 2005 they entered into a sales agreement with eight of the existing 13 employees of the company. They formed a worker owned cooperative to operate the company going forward. The workers purchased 40% (5% each individual) of the company share via a worker cooperative, with financing from a local bank and a non-profit loan fund that specializes in employee ownership.  The cooperative planned on purchasing the balance of the company in 2010, but the dismal economy put a temporary hold on those plans (the workers elected to delay the transaction). The company had to reduce its work force on a voluntary basis in 2009 due to a decrease in revenues. With the recovery in 2010, Select Machine, Inc. is back up to pre-recession revenues. Given the successful weathering of the "economic storm," the worker cooperative has resumed the process to complete the full acquisition of the manufacturing company. 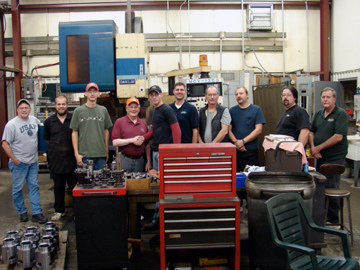 Employee owners of Select Machine. The company manufactures, sells and distributes machined products and equipment for installation on construction and demolition equipment.

The cooperative structure was ground-breaking in the sense that the owners qualified for the so called "1042 rollover," named for the section of the IRS tax code, which allows owners to defer capital gains when they sell at least 30% of their company to their employees.  Retiring business owners have frequently transferred their ownership interests to Employee Stock Ownership Plans (ESOP's - a common form of employee ownership), to take advantage of the tax deferral. Cooperatives laws did not allow for such a "transition" period, so they could not take advantage of the rollover. The company is either a cooperative or it is not.

The changes to the Ohio State Cooperative Code have created more impact in paving the way for transitioning a private business to worker cooperative status beyond the 1042 rollover. Conventional financing is typically limited to a percentage of physical collateral pledged in support of the loan and or the amount of "cash flow" generated by the business. This makes it impossible for employees to finance 100% purchase of a company. Employees have purchased portions of businesses in manageable stages via the ESOP model. Such acquisitions typically happen in three or more successive transactions. This allows the employees to acquire the business in portions that are "financeable" and allows the exiting owners to maintain control early on when the success of the transfer is most questionable. The changes in Ohio Cooperative Law now allow for a private business to transition into a worker cooperative much like ESOPs have in the past.

1.  Less focus on agriculture supply and marketing and expanding the application to a wider array of businesses.

2.  Additional language that allowed labor to be a contributed source - this allows for worker cooperatives in effect to become an employee leasing company.

3.  Better provisions were incorporated to allow for balancing the interest of different patron classes - for instance cooperative businesses could now have both consumer and worker classes.

4.  A provision was added that allowed for the retained patronage to act as "sweat equity" to build as retained capital within the company and not be treated as debt. This is a significant development to outside groups, such as lenders, who view the lack of equity accumulation within the business as a "deal breaker."

The changes in the Ohio Cooperative Tax Code allowed for two major hurdles in transferring a privately owned business to a worker cooperative to be overcome. The owner is now provided a potential monetary incentive to sell the employees through the "1042 Rollover" qualification, and the ability to transition the business over time under a method that has is financially viable. In the case of Select Machine transitioning to a worker Co-op, the business and jobs were retained on a local basis.

The permanent link to this issue is http://geo.coop/node/637.

Roy Messing, MBA, CEPA, is Program Coordinator for the Ohio Employee Ownership Center.  He leads OEOC's Succession Planning Program in Central and Southern Ohio, rural efforts for OEOC's Cooperative Development Center, and oversees its Common Wealth Revolving Loan Fund.  Prior to joining the center, Mr. Messing enjoyed a twenty-plus year banking/finance career.  The majority of his experience was serving in a lending capacity, providing financial solutions for his clients who were small and middle market businesses.  He also served as a CFO of a Northeast Ohio manufacturing firm.

A Charter for the Social Solidarity Economy

The Art and Culture of the Commons

Can Sociocracy Work in Large Groups?