The mission of Childspace Cooperative Development, Inc. (CCDI) "is to improve the quality of jobs for traditionally low-paid child care workers, and, thereby, the care received by children."  CCDI has used storytelling about issues facing childcare providers and teachers so that when they speak with political leadership they can communicate about the impact of the lack of childcare.  One important area of success has been in recalculating the state reimbursement rates for childcare and changing state policy on how reimbursements were paid. Reimbursement rates had been low and did not cover the actual cost of childcare. Also, payments for services from the state were slow creating cash flow problems for Childspace. They were able to get both problems changed.  Good grassroots work has also strengthened the purchasing power of childcare providers and resulted in program efficiencies through working together.  Peer mentoring occurs in conjunction with the resource sharing.

Leadership development is a priority of the CCDI. CCDI has two leadership program initiatives:  Childcare Voices and Stepping Up, Stepping Out.  Childcare Voices makes use of storytelling about issues facing providers and teachers so that they learn to craft an effective message about the childcare provider experiences. This is the program that successfully used storytelling to change state policy. Stepping Up, Stepping Out recruits leaders to join CCDI's advocacy efforts.  CCDI has a provider committee involved in organizing work in southeastern Pennsylvania.  This committee meets monthly to discuss issues and to guide the advocacy work. 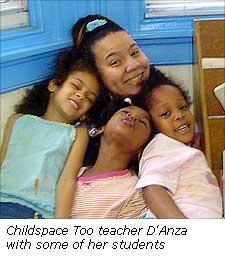 According to Teresa Mansell (Mansell, 2009), a founder of Childspace and CCDI program director, CCDI delivers a variety of services to providers as well as their advocacy work.  CCDI currently has 5 staff members. The work centers on three priorities: training; leadership development; and advocacy.  Training for childcare providers focuses on personal financial management and is part of a Child Care Workers IDA (Individual Development Account) program. The IDA provides matched savings to participants who regularly deposit a modest amount in this savings account. The IDA program helps childcare providers to augment their salaries and save in order to pay for their own or a family member's education, a down payment for a house or vehicle, or to start their own business.

A second priority of the CCDI training is for child care business owners and emphasizes accurate assessment of the actual costs to improve quality and to bring more compensation for state subsidized contracts.  A third training focus is on improving work sites.  This includes training on how to start a worker co-op; workers rights and responsibilities; effective communication and model work standards.

In a world where businesses often measure success in terms of growth, Childspace serves as a model which has emphasized the importance of measuring success by other criteria: sustainability, good quality jobs and raising the quality of childcare.  Childspace which was founded in 1988, has matured into a high quality stable worker cooperative.

Childspace is actually composed of 3 separate but closely aligned organizations - Childspace Management Group, the worker co-op (CMG);  Childspace Day Care Center, a community based nonprofit which contracts with CMG for day care services  (CDCC); and Childspace Cooperative Development, Inc. (CCDI) which was initially established to replicate the Childspace model and then shifted to provide training and advocacy for better compensation and improved quality child care (Madsen, 2005) (Childspace Cooperative Development, Inc.).  This organizational structure enables Childspace to raise grants through the community based nonprofit, CDCC which contracts with CMG for the day care services.  CCDI does not provide direct services but instead provides advocacy, training and technical support.   CCDI provides services not only to Childspace day care staff but to any child care providers in the area.

CMG has 16 members and 35 staff.  According to Susan Kavchok (Kavchok, Financial Director & Trainer, Childspace, 2009), the financial director and trainer, it often takes 5 years for people to become a member.  CMG's participatory structure includes nonmembers in the decision making.  Co-op members have lots of opportunities for participation but there is little financial incentive.  Compensation of staff is on par with other day care workers (starting at $9.00/hour) but the benefits are far superior.  All Childspace staff members accrue 12 sick days; 2 weeks paid vacation & another week for a winter break; 4 personal days and all major holidays.  Health insurance is provided with a 20% copayment.  Over time, vacation time is increased to 5 weeks.  Kavchok recalls only two times that there have been patronage refunds.  When asked about the turnover rate, she laughed and replied that there is very little turnover.  It has been 2 or 3 years since the last staff person left.  In traditional childcare employment turnover is much higher and a significant problem.

CMG manages three day care centers.  The oldest is in Mount Airy and serves 100 children from 70 families; fifty percent of which are subsidized and 50% are private pay.  The Germantown site serves 33 children from 25 families of which 70% are subsidized and 30% are private pay.  The third center serves homeless families and is located in a transitional housing program in West Philadelphia.  It serves 46 children from 25 families.  The West Philadelphia site has lots of grant support including Head Start and Help USA funding.  The operating budget last year for the centers was $1.2 million. The centers have a lower child/teacher ratio than other state funded centers except for the Germantown site.  The Germantown site does not cover its full costs from fees because of its lower number of private pay families.  So the other centers subsidize the costs of the Germantown center. This is one of the benefits of being a member of the umbrella organization.

CCDI was funded in the 1990's to undertake a replication of their model.  Two centers were developed as replications: the West Philadelphia center and another in California, Magic Years.  West Philadelphia was more of an expansion than a replication.  Cindy Coker recalled that the major issues that prevented Magic Years from becoming a successful co-op were market differences and the geographical distance from CCDI (Coker, 2009).  The center was beautiful and it served both low-income and market-rate families.  However, CCDI had not planned for the fact that there was also a very high end childcare market in the Bay Area because of the large informational technology industry in the area.  Other childcare programs charged more and attract the best qualified people in the area to work for them.   Magic Years salaries were great compared to Philadelphia but were not competitive enough to retain well trained staff in the Bay Area.  Consequently, after being trained by Magic Years, many staff members left for higher paying jobs in other daycare centers. 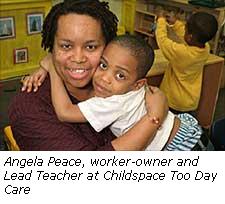 In addition, the worker co-op model was alien to the Magic Years' staff.  CCDI did send Childspace staff out to mentor Magic Years' staff and looked for ways to provide ongoing staff development to reinforce the model.  However, as Magic Years lost staff, they could not continue to put the same level of resources into staff development.  Consequently, staff continued to misunderstand the distinctions between governance, management and ownership roles. The Magic Years co-op was not sustainable.  Susan Kavchok says in hindsight, the distance from Magic Years was clearly an impediment.  Had they focused their efforts locally, it would have simplified the licensing, establishment of the worker cooperative and member education (Kavchok, Childspace Financial director and trainer, 2009).

Coker also noted that childcare regulations vary from state to state.  This creates another challenge in replications.  Other sites were attempted but never opened due to problems with securing acceptable sites.  Cuts in federal subsidies under the Clinton administration led CCDI to shift their focus to advocacy.  Subsidy rates for example were so poor in Texas that they could not pursue a financially sustainable replication there.

What did CCDI learn out of the replications?  Childspace came to understand the importance of identifying the parameters and designing the features essential for success. They also learned what parameters are site specific.   They were affirmed in the belief as well, that replication is not duplication.  Market and geographic idiosyncrasies are important to consider.  They learned that you have to put a lot of work into strengthening the mother ship as part of a replication.  The kaleidoscope training to create story tellers served this purpose.  It was also a vehicle for leadership development.   Coker, for example, has continued to use the storytelling approach with groups in her work with Seed Winnipeg (Canada) to get cultural content across.

Hearing Kavchok and Mansell's assessments of Childspace's strengths reminded me of the social cooperatives in Italy.  In a study tour of social cooperatives in Italy last October, the Italian cooperators told us that while their pay may be less than comparable providers in the public sector, the case load and quality of care was typically better.  The opportunity to participate fully in the governance and operational decision making of their own business fosters a more engaged and committed workforce.  This is a clear advantage over other social service providers.  Social cooperatives strive for a better quality of service for their clients.  This often translates into a lower ratio of participants to care givers.  The key lesson we can learn from Childspace and other social cooperatives is that the goal of creating a better quality of service and a better work environment are as important as the pursuit of better compensation.   Also evident in Childspace's strategy is that social cooperatives can raise the quality of care for a sector.  This was also true in the creation of Cooperative Home Care in New York.