The Arizmendi Association of Cooperatives' development effort began in the 1990s and has started five new bakery cooperatives creating around 100 new democratic jobs.  The businesses have generally been successful financially after a short startup period and two of them are now over ten years old, with very low worker turnover, high quality reputation, and close community connections.

The development method emphasizes attaining a baseline of business success as a foundation from which other social goals may be pursued.  Inspirations for the model came from two sources: the Mondragon cooperatives, which gained financial security from their networked business development and continued technical assistance, and the American franchise system, which benefits from a wide market presence and shared administrative support.  Because the workers in the stores govern the central administration, the analogy of an "upside-down franchise" has sometimes been used.

The Arizmendi development model can be characterized with four structural aspects:

A replication strategy.  The Association creates new businesses based on a successful cooperative in a nearby market, and benefits from an existing market reputation.  Each replication amplifies this shared market presence, but is independently owned by workers, decentralizing decision-making, and innovation, to smaller groups.

Self-financing.   New cooperatives are financed by debt and by the other member cooperatives, who contribute a percentage of their net income toward replication and toward organizational support.  The Association has not used philanthropic money to support its effort.

Decentralized governance. Member cooperatives elect the board of directors that governs the use of their contributed fees.  The board makes policy that would affect their shared reputation or interests, but does not interfere in everyday policies of the bakeries, allowing each to develop with the local desires and knowledge of the workers at that store. 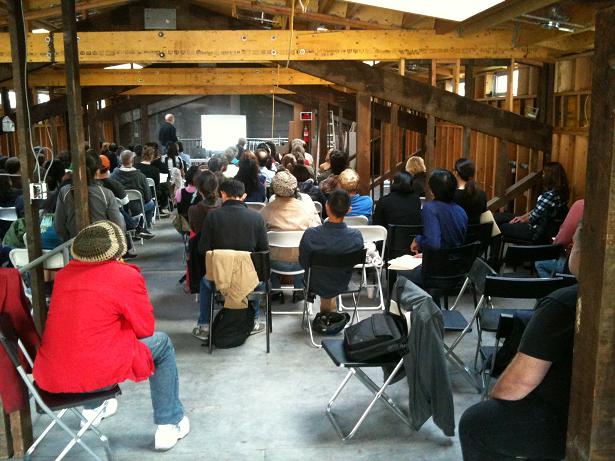 Tim Huet presents the risks and rewards of cooperative ownership at a community meeting during the development of Arizmendi Valencia Street. The meeting functions as an introduction to the project and also a recruiting session: worker applications are only offered to those that attend. This ensures that applicants understand what the responsibilities of ownership will be. For the Valencia Street store, almost 300 people attended presentations on the coming bakery which would start with 15 jobs

The original template business, the Cheese Board Collective, was founded in 1967.  In 1995 the Cheese Board funded the Association's part-time staff cooperative.  New businesses, all named "Arizmendi" opened in 1997, 2000, 2003, and two in 2010.  The businesses have taken between 1 and 3 years to be profitable and have resulted in the creation of roughly 100 new democratic jobs (not including the Cheese Board's workers).  During this time contributed fees from the businesses grew quite slowly.  The full-time equivalent (FTE) capacity of the staff cooperative has ascended to 1 worker during a non-development year, requiring staff to maintain other part-time work.  Surplus contributed fees are saved until there are enough to engage in a new development.  During a development phase the FTE rises to around 8.  Only after several new member cooperatives have been created and reached maturity are fees beginning to allow for an increased development pace - contributions in 2010 were as much as in the first seven years put together.

The Association chose to develop bakeries for several reasons, many of them oriented toward ensuring business success to lay the foundation for continued development efforts.  High among reasons was the availability of a successful bakery cooperative to use as a template, and the positive customer reputation that would accompany it.  The organizers also recognized a customer service advantage in proud owners having high retail exposure to their customers.  The choice of entity was in harmony with a steadily growing market for healthy, locally made food.  One of the founding organizers was also a member of the Cheese Board, and brought with him technical expertise and familiarity with that business which was an important resource.

A new bakery development in 2010 cost approximately $700,000, including site construction, training, and reserves.  This number has increased significantly since 1997, partially because the construction industry has gotten more expensively regulated, but largely because each new cooperative is viewed by customers compared to our existing members.  They must therefore start with a similarly robust kitchen on opening day instead of incrementally acquiring equipment as the early stores did in order to meet customer expectation.  Initial capitalization for the first Arizmendi came from unsecured five-year loans from community members.  The National Cooperative Bank aggregated and refinanced those loans and also financed the second Arizmendi.  The third Arizmendi was financed by the City of Emeryville as an incentive to locate there.  The fourth and fifth Arizmendis were financed by OnePacificCoast Bank, a community development financial institution.  Loans for the bakeries tend to structured as interest-only for the first year and then five years of principal repayment.  The Association has covered the costs of different aspects of development over time.  Most recently, the Association paid for five weeks of new worker training, and added cash equity to the project to reduce the loan amount. 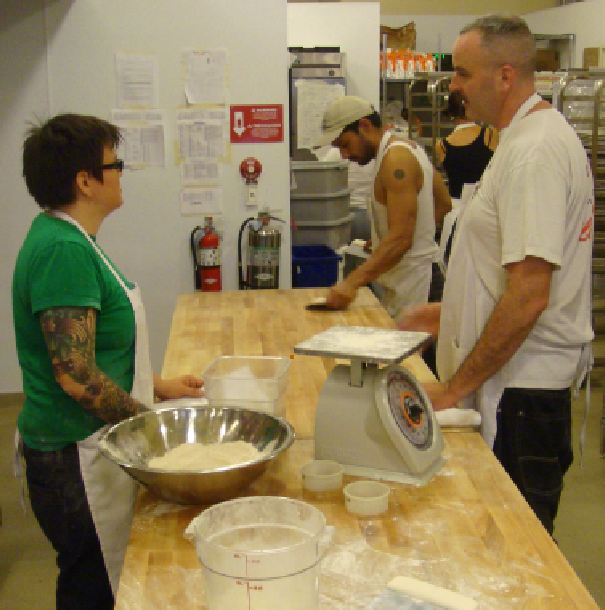 James Clarke, a veteran baker from Arizmendi 9th Avenue, trains Sandy Guevara and Max Perez, both founders of Arizmendi Valencia Street. James and several others worked in the new store for the opening six months to train and transition ownership to the new workers.

The Association's approach to recruiting has been to aim for a high percentage of baking (or food) professionals and neighborhood residents as the founding membership of the cooperative, both of which are expected to aid business success.  The development team works to establish relationships with local groups in order to contribute to the applicant pool.  Once the development phase is complete, the workers run their own hiring and define their own membership priorities.

The replicated businesses have been successful so far, and not only survive but have been awarded for high quality goods are considered anchor community institutions.  Workers at the mature bakeries make twice the wage they would as bakers elsewhere and have generous benefits.  The model has been very resource efficient, relying on self-financing and debt in ways that have reinforced cautious business practices and incentivized success.

The permanent link to this issue is http://geo.coop/node/633. 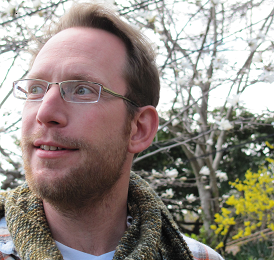 Joe Marraffino has worked in and organized cooperative businesses since 2003. He co-owned Arizmendi Bakery in San Francisco, a frequent winner of the city's "best bakery" awards, and became a technical assistance provider in 2007 with the Arizmendi Association of Cooperatives. In 2010 He co-organized the launch of two new bakery cooperatives in San Rafael and San Francisco. Joe has served on boards of regional and state-wide cooperative networks, and a member of the national Democracy at Work Network of peer advisors.

Worker Conference Goes to the South, Resolves to Collaborate with Unions

Vermont: The State of Co-ops