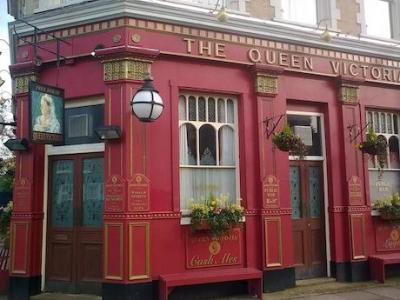 Eastenders is almost the UK’s most watched piece of fictional media. It had its thirtieth anniversary this year. It is based on the ups and downs of people in working class east London. Much of day-to-day life is organized around the pub, the ‘Queen Vic’. This is where people fall in love, fight, celebrate, give birth and where stories about who is doing what, and with who, unravel.

In April, a real-life pub on the other side of London met with a very different fate. The Carlton Tavern, which had been recommended by Historic England for listed status, was razed to the ground by two bulldozers without official permission, in order to make way for luxury flats. “What they did was just…unspeakably violent”, said councillor Jan Prendergast.

Things like this do not happen in Eastenders, which is funny, because a lot of implausible things do. Although popular, Eastenders is not a particularly accurate representation of life in London today. Communities in London are more fragmented, more ethnically diverse. They do not speak as much English as they do on Eastenders. And they are probably less violent too. Apart from anything else, the real Eastenders would not be able to afford to live in houses like those in Albert Square, or if they did, they would probably be sharing bedrooms and on insecure tenancies.

London’s favourite television programme tells us more about ourselves and our need for community and common places, in a time in which they are threatened, than it does about the reality of life in London.

What are ‘the commons’?

This primer to ‘reclaiming the commons’ is adapted from a talk I gave in April at the Zemos98 #reclaimthecommons festival. My aim was to explain the idea of the commons using audiovisual media. It takes three parts. Firstly, what is the commons? Just who exactly do the commons need to be reclaimed from? And finally I turn to how the idea of ‘reclaiming the commons’ has been expressed in the work of the Doc Next Network: a coalition that fosters a new generation of European documentary filmmakers, exploring free culture, education, and politics across the continent.

Curiously, there is no entry for ‘the commons’ in the Oxford English Dictionary of Sociology. So without a definition to hand, I will introduce you to a video series of thinkers explaining the commons. The first is Elinor Ostrom – the first woman to win the Nobel prize for economics – explaining the difference between “common pool resources” and the “commons”:

Here is Jay Walljasper, an American writer and commons evangelist, listing resources which could be included in the commons:

And this is the post-Marxist political philosopher Michael Hardt:

For our purposes, this is the important point to gather here. That the commons are resources which are not controlled by a monopoly of state or private power. And they have to be accessible too.

This is a more concrete definition of the commons from the International Association for the Study of the Commons:

But this is all very cold and mechanical.  ‘Reclaiming the commons’ refers to a ‘spirit’ as much as it does to a technical concept. The ‘commons’ is one of the best words we have for the shared life and a belief that better, more interesting, healthy, cohesive places are those which are accessible and used and shaped by a range of different people – that the presence and ideas of people, of all kinds, are what make for great places.

So the commons is a concept and also a spirit. But since we are talking about reclaiming the commons, we need to look at those from whom it needs to be reclaimed.

This is Garrett Hardin who wrote a famous paper in 1968 called “The Tragedy of the Commons”:

Perhaps the first enemy of the commons is a way of thinking – a pessimistic view of human nature that sees people as fundamentally self-interested actors, incapable of cooperating, weighing up costs, maximising benefits, and accumulating as much as they can for themselves.

These assumptions are similar to those that underpin ‘rational economic man’: an enlightened response to seventeenth century church dogma, which today has become a kind of dogma of its own.

Flora Michaels recently wrote about the proliferations of rational economic man into all areas of day-to-day life, in her book Monoculture:

“It’s not that the economic story has no place in the world and in our lives – it does. But without these other stories we have found essential throughout history, we imprison ourselves. When the languages of other stories begin to be lost, we lose the value of diversity and creativity that keeps our society viable. We’re left trying to translate something vitally important to us into economic terms so we can justify even talking about it…We end up missing what it means to be human.”

Here is a video from a T-Mobile flash-mob advert. Although the slogan says that “life’s for sharing”, it’s not entirely clear whether these people know that they are part of an advert or what they are really complicit in. Best watched with the sound off:

But some enemies of the commons are a bit more obvious to identify than an idea. In Istanbul, Recep Erdogan has formed an unstoppable armada of government, corporate and media power to push development projects through across the city. In the next ten years there are 30 billion euros of construction projects on the slate which will displace huge numbers of people, trees and buildings.

They include a new artificial Bosphorus canal, a road tunnel and an airport which will use six times as much space as Heathrow. Despite the protests in 2013, a shopping centre in the style of an Ottoman fortress is still planned for Taksim square.

But the enclosure of the commons is often a more subtle business. It may include enterprise zones, business improvement districts, the quiet handing over of land to private interests, CCTV cameras, and the subtle coding of public behaviours. In isolated cases it may not seem so bad, but across a whole city, it can have a deadening effect.

Whether you blame people or the politicians, parliaments and elected governments – the institutions of democracy – have never been in worse health. And this matters because democracy is the mother commons. Only five countries in the EU’s 27 produced a turnout of more than 50 percent in the 2014 elections (in Slovakia it was just 17 percent). Political parties that reject the very institutions they were being elected to did better than ever. Only a handful of turnouts in domestic parliamentary and presidential elections top two-thirds of the electorate. Most countries are ruled by presidents, coalitions and parties that have a mandate from a very small proportion of the population.

Symbolic power struggles, rather than being fought at the gates of factories or supranational organisations, are being waged over who controls housing developments, social centres and theatres. The act of reclaiming space seems to animate people across Europe – be that public space, space for decision-making or just a space to call home.

Here is one example of reclaiming the commons, taken from videos submitted to the Doc Next Network’s Radical Democracy Media Challenge: a tenant struggle in Seville.

As I mentioned before, Erdogan still plans to turn Gezi Park into a shopping centre. Making sure it gets built is clearly about more than creating somewhere for people to go shopping. And maybe that’s because these kinds of disputes are not just about claiming a commons.

I’d like to propose that, perhaps, these encounters and conflicts are also an attempt by those with power, and those without it, to determine what passes as common sense. If so, there is far more at stake than we might realise.