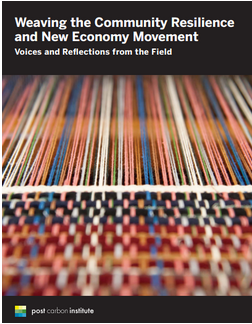 A movement is emerging in many places, under many guises: New Economy (or Economies), Regenerative Economy, Solidarity Economy, Next Economy, Caring Economy, Sharing Economy, Thriving Resilience, Community Resilience, Community Economics, Oppositional Economy, High Road Economy, and other names. It’s a movement to replace the default economy of excess, control, and exploitation with a new economy based on respecting biophysical constraints, preferring decentralization, and supporting mutuality. This movement is a sign of the growing recognition that what often are seen as separate movements—environment, social justice, labor, democracy, indigenous rights—are all deeply interconnected, particularly in the way that the current economic system is a root cause of much that they seek to change.

We interviewed eighteen leaders (read the interviews) and held group conversations with dozens more leaders by phone and via an in-person workshop at the New Economy Coalition’s CommonBound conference in June 2014.