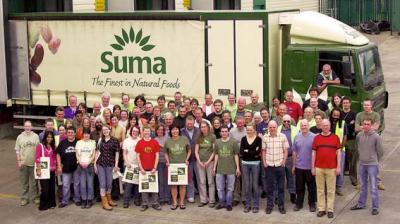 It is lunchtime at Suma Wholefoods' distribution warehouse. While most workers across Britain are preparing to inhale an overpriced chain-store sandwich at their desks, the 140 staff of the West Yorkshire co-operative are filing in for a plate of good, old-fashioned hot food.

Today, there is pumpkin pie, cabbage, potatoes and carrots, followed by a fruit bake. For those in the business world who say there is no such thing as a free lunch, Suma is proof that this is just not true. Lunch, like breakfast, fruit snacks, tea and coffee is a perk of the job. Meanwhile, as with all the other tasks in the company, staff members take turns to cook and serve vegetarian food to their colleagues as well as wash up after them.

It is among the more sought-after jobs in the organisation, says Paul Collins, a 50-year-old former music-business executive who has worked for the company in various roles including marketing and warehouseman, for the past 10 years.

"A pool of 20 of us take turns. Before I came here," Collins says, "I had never been much into cooking." But after registering an interest, he was sent to a vegetarian chef's school. "Now I can cook for 140 people, no problem."

This year, staff voted themselves a 5 per cent pay increase. And because the wholesaler made nearly £1m profit on a £34m turnover last year, each employee is receiving a £4,750 bonus. Sales have doubled in the past decade, helped in part by a 15-fold rise in exports. All of this has been achieved without debt.