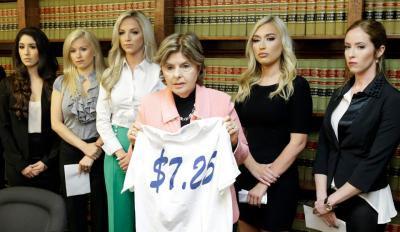 Today, I want to talk about a group of NFL employees who are taking direct, collective action against the low pay, hostile work environments, and discrimination that league bosses and owners conveniently ignore: NFL Cheerleaders.

“Cheerleaders are being exploited and mistreated solely because they are women,” said Gloria Allred, the cheerleaders’ attorney, reading from the letter at a press conference outside NFL headquarters in New York. “These cheerleaders deserve to be paid more than a mere pittance.”

An NFL security guard blocked them from entering the building and accepted the letter, but there was no response to their demands from any NFL personnel.

It doesn’t matter if you’re working in the private or public sector, a fast food joint, hospital, mine, nursing home, or performing on live television during the NFL’s entire season—the moment you demand better pay, better treatment, and a safer working environment from the boss, you’re tossed out and labeled an “agitator” who violated their “trust and open door policy.”

Read the rest at the People's World