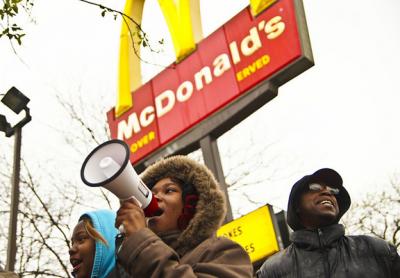 A little known statistic unearthed in 2007, linking the success of organized labor to its willingness to embrace women of color, is getting new support from a duo of policy researchers.

Data crunched eight years ago by Kate Bronfenbrenner, director of labor research at Cornell's School of Industrial and Labor Relations, and Dorian Warren, who teaches political science at Columbia University, found that women of color had the highest success rate of union organizers.

Relying on information from the federal National Labor Relations Board, they concluded that union organizing efforts led by a majority of white men have the lowest win rates (35 percent) compared to those led by a majority women of color (82 percent). And when women of color are the lead organizers in units with more than 75 percent of women of color in the targeted workforce, the rate of success is even greater: 89 percent are victorious.

Building on this data, and sending what they call a "love letter" to black women in organized labor, Kimberly Freeman Brown and Marc Bayard, with support from the Institute for Policy Studies in Washington, suggest that the labor movement should pay particular attention to black women.