An old Nepali friend* and I were walking through the narrow, cobblestone streets of Bhaktapur yesterday when a large blue sign above a shuttered store front caught my eye. “Oriental Co-operative Ltd.”

“That's what I'm talking about,” I said to my companion, pointing to the sign. I've been regaling him about the wonders of cooperative economics for a week now, and he's become familiar with my obsession. 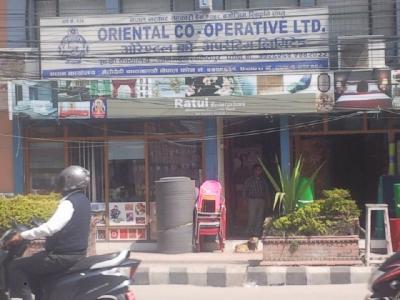 “Yes, yes, brother,” he replied, unimpressed. “These days you find this type of co-operative everywhere. They call it micro-finance, you know?”

He went on to tell me how these micro-finance co-operatives operate. Members deposit whatever they can every month, usually small amounts of 10-100 rupees**, and receive an interest rate on their deposits of around 5% per year. Members can then get loans from the co-operative for 30% annual interest (and of course, no one becomes a member of the co-op unless they plan on getting a loan). The 25% spread then goes into the pockets of whoever organized the co-operative.

As for how the co-operatives are organized, my friend explained, “You must have 22 people to form a co-operative. So usually, one man has the idea and then he gets his wife, his sister and sister's husband, and some friends to start it.” Consequently, the profits from these co-operative credit enterprises generally end up enriching one family or tight-knit group, at the expense of the majority of the members who end up saddled with unsustainable debt. “What kind of business can make more thas 30% profit?” as my friend put it bluntly.

And then, apparently, it's not uncommon for a group to form one of these “co-operatives,” collect a few months worth of deposits and then just disappear with the money.

All of this didn't come as too big a surprise to me, as in my eight trips to the country I've become well accquainted with the culture of corruption that, unfortunately, is an omnipresent feature of life in Nepal. And I was already aware that the utopian claims of the third-world micro-finance movement have failed to be realized in practice. In fact, I'd just read a blog entry from Cathy O'Neil (aka the Mathbabe) on the counterproductive effects of micro-finance for the world's poorest citizens. But I was saddened that these sorts of shenanigans seemed to have turned my old friend off of co-operatives entirely, as evidenced by the look of disgust on his face as he told me about these “frauds.” However, what he told me next lifted my spirits considerably.

“Look, brother, this is what we do. Some of us friends, who we know very well, we all make an association together. Not an official association, not a legal one, but a type of illegal one.” I was intrigued.

“First to begin, everyone gives 10,000 rupees. If we have 20 of us friends, we can have 2 lakh*** immediately. Then everyone gives, per month, 500 rupees. When one of us needs a loan, we make a type of application. I want this much money so I can do such and such a thing—like this. Every two months we meet and everyone who wants a loan brings their application.”

He told me they then make loans to eachother from this joint fund, giving everyone as much as the fund can afford, and charge themselves 2% interest per month. When the loan is repaid, all the money along with all the interest goes back into the fund. He told me about a couple of his friends who had been able to open their own thanka**** studios, rather than painting for someone else, thanks to this “illegal” revolving loan fund.

“We do like this,” he told me, “because if we do it officially, we have to have so many documents and so many signatures, have to run here and there and pay in every office for the paperwork, and then we have to pay tax to the government and we couldn't do it, it would be too expensive.”

There's only one problem with this set-up, which is that if someone fails to repay their loan, the association has no way of “cathing them” to recover the money, since everything is being done unofficially. “So that is why we only let close friends in this association, who everybody knows, and we can see how they spend and how they do.”

“You run on trust,” I offered.

“Yes, brother, on trust. But this type of co-operative which you see everywhere nowadays, they are only for taking advantage of poor people, that is why I do not like.”

“You don't like those co-operatives, so you started a co-operative of your own,” I said, unable to keep myself from grinning.

“I suppose you are right—a type of co-operative,” he admitted grudgingly.

These types of informal co-operative loan funds are apparently pretty common in Nepal, and it's not unusual for someone to be a member of two or three at a time. Finding skeletons in the co-op closet is always discouraging (and anyone who's been around the movement for any length of time is aware of at least a few), but as my friend showed, albeit unwittingly, the solution to corrupt “cooperation” is real, legitmate cooperation.

* I'm not going to name names, for reasons that will shortly become clear.

** The current exchange rate is 103 Nepali rupees to 1 US dollar.

**** Thankas are traditional paintings of Buddhist dieties and mandalas.

The exciting Association of Cooperative Educators conference in Cleveland July 27-30!

Union leaders to pull funds from five banks, look to CUs