Revolution Defended in Rojava – For Now 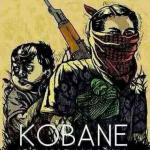 After approximately four and a half months of fighting, Kurdish forces have successfully pushed the Islamic State of Iraq and the Levant (known as ISIS or ISIL) out of Kobanî. The coalition of ground forces most notably included the People’s Defense Units (YPG) , Women’s Defense Units (YPJ) , and the Peshmerga from the Kurdish Regional Government (KRG).At the same time, through the air, a U.S. led-coalition made 700 airstrikes against ISIS. On February 6 it was reported  “fourteen more villages and some strategically important points have been liberated.” In an October 2014 article for Naked Capitalism Claude Salhani noted the strategic importance of the region. Salhani stated “victory for” ISIS in the region “would give the group prestige among the dozens of groups lined up in the fight against Syrian President Bashar Assad. It would also secure the terror organization’s flow of oil to a lucrative market.”

Yet, great damage was sustained in Kobanî, with thousands killed, over 260,000 refugees having crossed the border into Turkey. For all the attention given to ISIS by mainstream Western media, these events have been tremendously underreported. Recent developments in the area known as Rojava may indicate why. Many report a social revolution is underway in Kurdistan, with the three cantons of Rojava – Efrîn, Kobanî, Cizîre – being at the forefront of this social transformation.

An academic delegation, including prominent anthropologist and anarchist David Graeber, has not only confirmed, but has expressed support for what is taking place in Rojava. Graeber himself reports participatory democratic alternatives being attempted throughout the core and capillaries of Kurdish society, remarking in an interview that “One of the first places we [the academic delegation] visited was a police academy (Asayiş). Everyone had to take courses in non-violent conflict resolution and feminist theory before they were allowed to touch a gun. The co-directors explained to us their ultimate aim was to give everyone in the country six weeks of police training, so that ultimately, they could eliminate police.”

This is in addition to schooling being provided and instituted at all levels of education, including an upstart university in Rojava. Janet Biehl, also part of the delegation, stated “The education system in Rojava is non-traditional, rejecting ideas of hierarchy, power and hegemony. Instead of following a teacher-student hierarchy, students teach each other and learn from each other’s experience.”

The academic delegation as a whole asserts that the people of Rojava seek to not construct a state. Rather, what is sought is system of self-governance that is managed through various neighborhood and citywide councils, assemblies and committees, as well as through thematic councils, such as women’s councils and other assemblies at all levels of society, with cooperatives as the primary and vaunted mode of economic production. Citing Dara Kurdaxi, an economist and participant in the region, Michael Knapp in Peace in Kurdistan writes “the oil industry is under the control of the councils and managed by the workers’ committee.” He also notes that “A great deal of land which was previously nationalized under Assad as part of the anti-Kurdish policies is now managed by free Rojava through agricultural cooperatives” and that there also “doctors’ committees” who are “working to form a free health system.”

Together these arrangements compose what is otherwise known as Democratic Confederalism and Democratic Autonomy. In an article written for The Guardian, Graeber compares developments and democratic experiments in Rojava to the anarchist- and socialist-led Spanish Revolution of the 1930s. In what can be considered the constitution of the three autonomous cantons, the Charter of the Social Contract stipulates that the peoples of the region “do not accept the concept of state nationalism, military and religious." Instead, it is repeatedly stated that “democratic self-management”is adhered to.

Despite the attention paid to ISIS, virtually nil has been given by the mainstream media to Kurdistan. Little attention is being paid to the internal dynamics and goals of Rojava, which run counter to capitalism, the state, patriarchy, and the ecocidal tendencies wrought and perpetuated by various overlapping social hierarchical networks and systems. Given the extraordinary and ever-increasing corporate control of mainstream media it is no surprise that examples of system-change are given little to no airtime. Concomitant to the victory in Kobanî, Turkish President Recep Tayyip Erdogan expressed staunch opposition to self-governance in Rojava.

None of this is to say the Rojava Revolution is without its contradictions. Human Rights Watch notes “the human rights abuses committed by the Democratic Union Party (PYD)  and its security forces are far less egregious and widespread” compared to those of the Assad regime, ISIS and other non-state actors, but “they are nonetheless serious.” Such practices include the recruitment of children under the age of eighteen years old. According to Human Rights Watch much of the activity of the underage recruits includes manning checkpoints and assisting in transferring military supplies and information – activities prohibited by international law for those underage.

Human Rights Watch also notes that “"one 17-year-old boy said he had participated in military operations.” In addition, many people who were interviewed noted children participating on the frontlines. Human Rights Watch also states that while the YPG has condemned the presence of children in security forces, however, it also notes that “some children had joined on a ‘voluntary basis’ but did not serve on the battlefield.” The YPG has since stated “it would no longer admit new recruits under age 18 and sign Geneva Call’s 'Deed of Commitment' protecting children in armed conflict.”

Yet, in Syria Freedom Forever Joseph Daher has documented four demonstrations between December 27, 2014 and January 11, 2014 demanding that the PYD return a fifteen-year old girl. The tension here, though, has not been between families and the largely male composed People’s Defense Units (YPG), but rather between families of such children and the Women’s Defense Units (YPJ). Daher writes of a number of other concerning incidents and practices within the region. These include the closure of an independent radio station by the PYD. There have been conflicting reports concerning the PYD's actions and stance in the region.

Many have noted the free multiculturalism of Rojava. For example, in an interview David Graeber states “the Assyrians we talked to said, after a long difficult relation with the regime, they felt they finally were being allowed free religious and cultural autonomy.” On the other hand, the Anarchist Federation in Britain released a statement in December denoting its suspicion of the PYD. There has been a persistent independent explicit anarchist presence in the region, though, with frequent direct action being taken by the Turkish Revolutionary Anarchist Action (DAF) organization.

Nevertheless, victory in Kobanî cannot be understated. Participatory democratic institutions in Kurdistan not only puncture false representations of political life and ideology in the Middle East, but also show an alternative to the state and capitalism is possible. These institutions have emerged despite being surrounded by hostile forces as well as having multiple embargos placed upon the region. On the left, it is our job to shine a light on these positive developments, and make sure such societal and structural critiques and projects are sustained. It is also important to document questionable practices, such as the ones mentioned above.

Solidarity and support should be given, but a critical perspective must be maintained. Given recent comments by Erdogan, the tenuous political situation in the whole of Syria, and the American government’s involvement in the region, we should be weary of those who assert this is the final victory against external threats to the social revolution underway in Rojava.

*Alexander Kolokotronis is a BA/MA philosophy student at Queens College, City University of New York. He is the founder of Student Organization for Democratic Alternatives, a Worker Cooperative Development Assistant at Make the Road NY, and the Student Coordinator for NYC Network of Worker Cooperatives. This article first appeared in New Politics.