Reflections on the Savior Complex

“If you have come here to help me, you are wasting your time. But if you have come because your liberation is bound up with mine, then let us work together.”

“Whatever you do, don't go to work for a big INGO. It'll drive you crazy”

The year was 2004, and my favorite anthropology professor was giving me her two cents about where I ought – or rather, ought not – to go with myself and my newly minted BA. I'd been something of a teacher's pet to her, so she had a pretty good handle on my personality and personal politics. By way of explaining her advice that I avoid International Non-Governmental Organizations in my career search, she proceeded to tell me about an experience she'd had while working with a women's health INGO in far-Western Nepal.

However, it quickly became clear to my professor that the needs of the villagers were not the main concern of the INGO. They used the money to hire an outside expert who specialized in building infant intensive care units in remote areas of the “third world,” who came to the village and promptly started building an infant ICU.

The facility was, admittedly, first-class, with it's own generator and all the latest in medical hardware. The INGO reported that this effort would surely lower infant mortality in the area, which was well above global averages. The villagers were, however, not impressed. In fact, they were down right angry. “I don't want to sound callous,” my professor told me, “but saving a few marginal babies is not going to help anybody – clean water is.”

The villagers complained bitterly among themselves – in a language that the “expert” didn't understand – about all the money wasted on this useless project, while the women's health professionals patted themselves on the back and pocketed their “first world” salaries. “That kind of shit happens all the time,” my professor said with a sigh. “You'd hate it.”

What my professor was describing was an extreme example of what I called in my last blog entry “the White Savior Complex.” In fact, the Savior Complex is not exclusively a white problem, but manifests itself along class, sex, gender and educational lines, as well as any other axis of privilege that you care to name. Anywhere the privileged seek to ally with the unprivileged, the Savior Complex is almost certain to rear its ugly head.

In a recent email discussion with a colleague, I said that I think the underlying problem is one of mistaking condescending paternalism for solidarity. This was her response, in part:

I perceive a savior spectrum. On one end are people steeped in the nonprofit industrial complex, who are keenly aware that their livelihood is contingent on maintaining a dysfunctional holier-than-thou codependent relationship with those they "help." On the other end are those with so little self-awareness that even as microaggressions, microassaults, and microinvalidations are spewing out of their mouths, actually believe that they are saving the “downtrodden.”

This perspective correlates pretty well with my experience of things. The condescending paternalism, these “microaggressions, microassaults, and microinvalidations” are not, I rush to add, the result of any ill intent on the part of the “saviors,” at least not usually. Rather, I think, it is a result of the natural human tendency to give oneself credit for one's successes, and conversely to blame others for their failures, regardless of how much success and failure are independent of actual merit.

There was a recent experiment performed by some social-psychologists at UC Berkeley, in which subjects played rigged games of Monopoly in which one player was give certain advantages (starting with twice the money, rolling extra die, collecting extra money for passing 'Go'). The researchers found that after only 15 minutes of playing this obviously rigged game, privileged players started to display marked changes in behavior. Advantaged players became louder and more forceful in moving their game pieces, some took more than their share of pretzels from a communal bowl – one was even heard afterwards explaining his strategy for success! As the lead researcher commented, this last is a telling example of “how we make sense of advantage.” 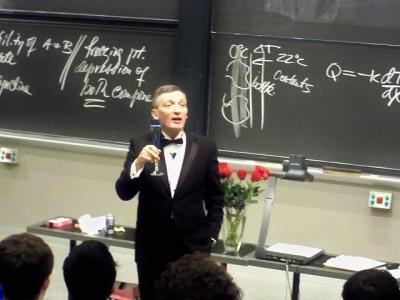 For some reason, it is psychologically difficult for most of us to admit that our success, or lack thereof, may have more to do with circumstances beyond our control than it does with our own effort or skill. Even when outcomes are rigged in an overt way, our minds perversely insist on attaching praise or blame to individual participants in the “game.”

A rigged game of Monopoly is an apt analogy for our economic system. From the very beginnings of our country, our economic, political and social systems have created haves and have-nots (and have-mores, as George W. Bush once quipped) through the real-life equivalent of rolling three die and getting $400 for passing Go. The people I've described as “saviors” are those who have benefited from this rigged game and who imagine that that fact indicates their superiority – in some sense – over those whom the game has been rigged against; and who seek to use this imagined superiority to help those who have been cheated. This is the equivalent of the advantaged Monopoly player explaining his strategy for success to the disadvantaged player. In the context of the experiment it's simply humorous, in real life it is both maddening and degrading.

This is why I react so strongly any time I get a whiff of this dynamic. It may be hard for those whose life experience has never put them on the receiving end of this kind of condescension to realize exactly how damaging this type of behavior is. But if you've ever been treated like an ignoramus because you work a manual labor job, or been lectured to about financial responsibility by someone who makes four times as much as you do, you know just how disempowering and insulting this behavior can be – and nonetheless so for the perpetrator's complete obliviousness to what they are doing.

Experience is the Best Teacher

I didn't start to really understand the dynamics of social oppression (class-based, in my case) until I got to experience it first-hand, working in the many low-wage jobs that currently fill my resume*. Imagine going to a job every day where everyone from the manager on down to the teenage customers treat you like a less-than-human underling. Imagine being expected to keep your head down and your mouth shut, being expected to just show up and do what you're told – always. Imagine being put down and degraded in a multitude of ways both explicit and implied, day after day, month after month, year after year.

Now imagine hearing yourself and your friends and family being discussed by those who have treated you this way as if you were nothing more than problems to be solved, inconvenient objects to be dealt with – like a pothole or a downed power line. Imagine someone comes from that world of privilege, telling you they want to help...and then proceeds to treat you like a parent treats a child...and a slow child at that.

The psychological fall-out from a lifetime of this type of degradation is hard to overstate, and difficult to imagine for those who have never been subjected to it.  Unfortunatley, lots of us don't have to imagine, having already lived it. Lots of us are living it everyday. But if you've spent your entire adult life within the confines of academia, or in comfortable salaried positions at well-funded non-profits or corporations or in government, then it might be difficult to wrap your head around – especially if you've never even been informed of the problem**.

True solidarity, in my mind, absolutely requires that we treat each other as equals. Projects that come from the top-down, that are initiated and directed by the privileged for the supposed benefit of the unprivileged, mitigate against people being able to see each other as equals across class, race and other lines of privilege. I'm not prepared to say that top-down projects cannot ever lead to a true sense of equality among those involved, but achieving that outcome becomes much more difficult when you're starting from a place of unequal power.

Learning is a Two-Way Street

What is required is a humility on the part of all involved, but especially on the part of those who enjoy social, political, and economic privilege in the current state of affairs. Solidarity requires that each person come to the work, whatever it may be, with an openness to others and a willingness to be changed by the process and by the other people engaging in the process – all the other people. Showing up to practice solidarity with a plan already in place for what the beneficiaries of your solidarity need to do is a sure sign of the Savior Complex and an indication that your project needs a serious re-think. In my opinion, anyway.

Long time co-op developer, practitioner, and member of the Cooperative Hall of Fame, Melbah M. Smith exemplifies this kind of humility, and sets an example that we would all do well to follow. In the recent presentation she gave in honor of Black History Month, Melbah recounted her experiences helping to train cooperators in the rural South:

Whenever I would go to a group to do training...leaving the office may be at 5:00 and driving two hours to get there maybe for a 7:00 meeting – I would meditate on what am I going to talk about, what am I going to share tonight after having prepared during the day to go there. Once I presented, and on my way back, I would say "My, I learned so much tonight! I learned so much tonight from the people that I was talking to. I had prepared and yes what I prepared was well received, but I also received what they had to give to me." I think that was a great teacher, right there.

The Savior Complex makes this kind of mutual learning impossible, as it starts from an assumption that teaching can flow only from the top down, never from the bottom up. This assumption is damaging for everyone involved, even the saviors themselves, who fail to take the opportunity to learn what they might, and so remain more ignorant than they need to be. But, as is most often the case, it is those at the bottom – those who are expected to shut-up and listen, those who are the subjects of social and economic “experiements,” those who are members of “target populations” – who really get damaged by all this. No amount of good intentions will ever change that.

* Which is what I actually ended up doing with my newly minted econ degree. Montana's labor market isn't the best...