Organized Demand: Grassroots Economic Planning as a Path to Scale

We as the solidarity economy movement are not at the political, economic, or cultural scale that we need to be at to start seriously addressing in real practice the idea of large scale markets vs. planning. That is to say, we don’t have a grassroots political movement or the office holders to seriously make a state or the country try a large scale planning system instead of markets. We also don’t have the scale of economic institutions to meet the needs of whole cities and regions even if they did have a planning mechanism, and we don’t have enough working class people bought into the idea of the solidarity economy to supply a grassroots level of demand that could help propel our economic and political work.

Which is precisely why we need to start (or rather keep) debating and strategizing as a movement about the long term trajectory of our work and how it aligns to build a healthy world. That means that big questions like planning vs. markets is a reality that we need to orient our work towards once we have a well thought out and theorized vision of what a good structure for this could be. We know that all of it is still experimental, that we are only building a foundation for larger changes to come, and that means we have to start setting up our projects and organizing to aim at those bigger changes right now while they are being developed.

I wish for this to contribute to the debate about systems change particularly in reference to scale, accessibility, and markets vs. planning.

As the solidarity economy movement, particularly the worker co-op movement, we have a lot of energy going into organizing and building the supply side of solidarity economy. That is to say: we are all trying to build a lot of businesses that have worker owners. Obviously that’s a logical and good place to start for the sake of concrete change in worker lives, and arguably building a political power base of democratic worker owners. Of course, we are all running into the interesting and complicated spot of scale and markets.

I’m going to try to make this very simple for the sake of a short read that is to the point. I’m only going to be presenting a certain set of a few ideas, not tackling all aspects of these questions full on.

To have lots of badass, social justice, ecological worker co-ops, we need to have demand for the products or services they produce. Someone has to be willing to buy stuff from them at a price that allows a living wage. So a big part of our market as a lot of worker co-ops has become middle class white liberals. They can afford to shop according to their values. If we don’t target them we start to risk competition with other firms that provide the same good or service but also have an economic “advantage” through worker exploitation, pollution, etc. We also come across the problem of not connecting and being a part of the working class since our goods and services are out of their price range, not in their stores, and generally inaccessible.

Arguably, once we have met the demand of the small base of middle class white liberals who will buy our products reliably, we need to access new markets/demand to scale up our enterprises. Recently there has been an answer to this which is going for large, anchor institutions as a market (hospitals, nursing homes, colleges, school districts, etc.) that can pay for a wholesale amount of good/service and allow a stable market for a scaling worker co-op. Some co-ops use the interest of the institution in green, socially responsible products as the reason to contract with them where other co-ops go for a competitive price and many probably do some of both. Either way, the big buyer demand is an exciting (and not without its own huge challenges) market that can help scale our work and movement. It’s definitely part of our strategy here in Northfield MN.

I’d like to propose a second (another) option. This is an idea that both meets the need of a new and expanded market (so we can grow), and addresses the problem of working class accessibility. The bigger idea came to us while doing a micro version of it as part of starting up a local composting worker co-op here in Northfield MN. To test for how much of a market for curbside compost collection there would be in our town, we knocked on doors and asked people about their interest, the price they’d be willing to pay, and if they prefered an out of town provider or a local business. We know that we can launch the business at 500 subscribers (we’re a little bit over 100 right now and going strong) and thus it’s a matter of finishing the organizing of the demand side.

Before explaining the idea in depth, there is already a great micro example that is already common in the sustainable food economy: the CSA, Community Supported Agriculture.

The CSA was born out of the need from farmers for a steady and reliable market for their crops. Farmers markets proved to be too unpredictable as far as how many people would buy how much of any of your crops each week. The basic CSA model is:

What this is is highly decentralized, grassroots economic planning. Farmers plan their business based on a committed set of buyers with skin in the game through an early investment and thus do not suffer at the potential whims of the market on an inconsistent timeline. 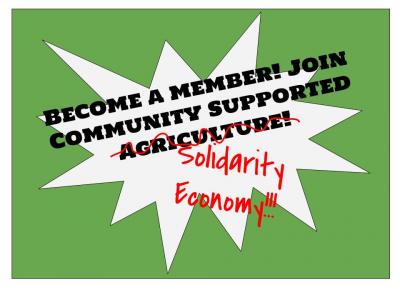 Here’s the idea for using this simple tactic in a bigger way to help us scale:

We continue the legacy of buyers clubs, cooperative purchasing societies, and consumer co-ops in a new way. Through grassroots organizing, we sign people up to commit to buying specific goods and services from the cooperatives that exist/we create. They commit to a timeline of purchasing, prices, and any other necessary participation. We use these commitments to not only fill demand for current businesses but also to organize markets to meet thresholds in order to launch new businesses too.

Here’s a way that makes sense to me. All of this is merely ideas, anything can be done with any of but I’ll offer a starting point:

What this would allow is for solidarity economy enterprises to not be reliant on the demand from regular capitalist controlled markets. This would allow us to start experimenting with a serious scale of planning (hundreds of people, thousands, etc.) in a local and grassroots way based on people's interests and consent. It also presents us an opportunity to have thousands of face to face conversations about the solidarity economy with regular working class people (in a time when people are looking for practical solutions) and we get to offer them an opportunity to be a tangible part of it at the same time. Can we avoid the pitfalls of markets for co-ops and scale a grassroots planned economy at the same time? How would it change the way we build enterprises if we had a market guaranteed and ready? How could we mobilize that base of consumers politically? Could this be a tool for propelling the solidarity economy into the consciousness of thousands of regular people in a concrete way and beneficial way? These are just some questions and exciting possibilities.