One of the Biggest Threats to Civil Rights

We usually think about our civil rights -- our freedoms of speech, assembly, etc. -- as being guaranteed by the Bill of Rights of the US Constitution.  However, the Bill of Rights only serves to limit official, government conduct, and was never intended to constrain the actions of individual citizens.  And while the government is (supposedly) barred from prohibiting people from freely speaking their minds or meeting together, in practice it is more often our fellow citizens, acting as individuals, who create barriers to our freedoms of speech and assembly.  Government action to limit speech is obvious and elicits an immediate outcry, as with the over-the-top display of military force by police in Ferguson, MO in response to protests in the wake of Michael Brown's killing.  However, there are much more subtle ways of intimidating people into silence -- some of them done consciously, others unconsciously -- that, because they are subtle, are often more insidious than overt acts of repression, since it is harder to recognize them as such. 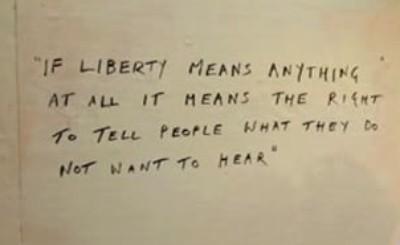 When people express unpopular opinions, they may find themselves shunned by their associates.  When people organize themselves in ways that go against the norm, they may find themselves branded as outcasts who "don't play well with others."  When this happens, the people who are expressing or organizing themselves in uncommon or unpopular ways are pressured -- not by the government, but by their ostensible allies -- to censor their speech and desist from their organizing.  As Martin Luther King Jr. put it, in his Letter from Birmingham Jail:

I have almost reached the regrettable conclusion that the Negro's great stumbling block in his stride toward freedom is not the White Citizen's Counciler or the Ku Klux Klanner, but the white moderate...who constantly says: "I agree with you in the goal you seek, but I cannot agree with your methods of direct action"; who paternalistically believes he can set the timetable for another man's freedom;... Shallow understanding from people of good will is more frustrating than absolute misunderstanding from people of ill will. Lukewarm acceptance is much more bewildering than outright rejection.

The antidote to that shallow understanding and lukewarm acceptance -- for those of us who do not want to repeat the mistakes of Dr. King's white moderates -- is the committment to uphold and support everyone's freedom of speech, even when they are saying things that make us uncomfortable; to support the right of all people to organize themselves in whatever manner they see fit, without dictating what that organizing must look like or who must be involved in it.

If we retaliate against people whom we claim to be allied with when they say or do things that we don't understand, we ourselves are guilty of curtailing their freedom, even if that retaliation is subtle.  We must, rather, seek to replace our shallow understanding with a deeper understanding, an understanding which can only come when we value others equally with ourselves -- when we give their truths as much weight as we give our own, rather than dismissing or shaming that which we do not understand.

Political equality as codified in the Bill of Rights means very little if we do not live that equality out in our daily lives, which means making a committment to support our allies in expressing and living out their freedoms, whatever particular form that might take.  But if we put social barriers up around what people are permitted to say in public, around how people are permitted to organize for their liberation, we may as well be taking up a post with the SWAT team snipers in Ferguson.

The ways in which we well-meaning whites shut-down voices and organizations that make us uncomfortable may not be as overt as pointing a rifle at a group of protesters, but the message delivered is same: shut up and do what you're told.  Let us make a committment to sending a different message instead: one of unity and support, not one of intimidation and dismissal.  Which is simply to say, let us love one another more.  If we are ever to make this world a truly better place, and to heal the myriad wounds of our history, that is the one thing we can't do without.