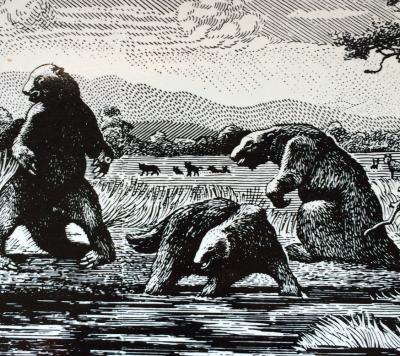 I've been meaning to write something that lets me use that picture for weeks now. It's from the cover to Fred P. Brooks's The Mythical Man Month and I've always wondered whether these were his mythic beasts or if they were a play on his being a dinosaur in the industry. The Mythical Man Month is one of several computer software technology essays in the book and, in many ways, the most important. It may be the most important thing Brooks ever wrote. It is almost certainly one of the most important things I have ever read ... it had and still has an enormous impact on my thinking.

The idea is both simple and unoriginal. "Small is Beautiful" is a famous message and E.F. Schumacher's book of that title is another brilliant and insightful treatment. There are others. But Brooks's simple explanation is the most compelling.

Simply, there is a cost associated with dividing the labor. That cost may be offset by overall group productivity. But, once the labor is divided past a relatively small number, the added cost of coordination and communication dwarfs the potential productivity increase. Past that point, the division decreases (often catastrophically) the productivity of the enterprise. Brooks uses the example that you can't improve gestation productivity of one baby by adding women. It is the ultimately indivisible task. There are a lot of "jobs" that, on reflection, we realize are most efficiently done by quite small groups. And often the work-product of such small collaborations (or solo practitioners) is of superior quality, as well.

Modern Industrialism aggressively propagandizes against this observation. There are two factors at work. First, the division of labor beyond the relatively natural or organic level creates relatively low-skilled tasks to be done. The design and maintenance of the organizational processes and "tooling" becomes a bit of "Intellectual Property" (secret sauce, protected by Patents and Copyrights and ruthless trade secret Non-Disclosure law). This is a method of abstracting worker know-how from skilled workers, dumbing it down for less-skilled (lower paid, more compliant) workers, and letting "management" de-skill their workforce for "industrial peace" and improved profits. It is an unrecognized form of "enclosure" no less dishonest than the theft of any property for private profits.

This is the foundation of "offshoring." US high-paid workers are told to proceduralize their communal knowledge and teach it to lower-skilled "offshore" (often just cheaper and less experienced) workers so that the labor cost of various operations is reduced. This is a natural process in healthy institutions. The experienced and thoughtful members of workgroups mentor younger entrants and move on from the routine. But it does not happen fast enough for the financier or the corporate value-extractor. They accelerate the process and shed the experienced members of their labor force with no concern about the loss of innovative energy or deeper understanding of the institutions' muscle and bones (as it were). It is comparable to agricultural practices that destroy the fertility of the land or exhaust the aquifers pumping excessive and unreplenishable amounts of water.

In a few pages and in simple language, Brooks tells us the efficiency versus coordination/communication story. The de-skilling (offshoring), de-humanizing story is a later observation. It is all the story of Centuries of Consolidationist and Financialization thinking. Mercantilism was morphed into more Individualist Capitalism (no kinder or more inclusive) and this, in some regard, is the sharp point of the spear.