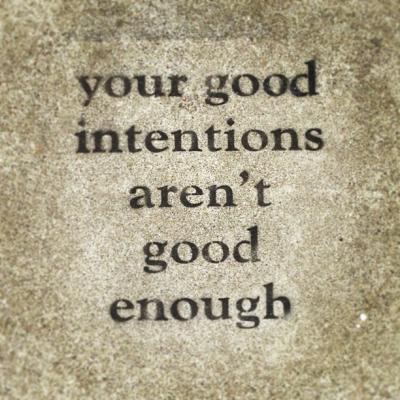 I am going to make what I imagine will be a controversial argument.  Prepare yourself.  Some of you may be offended.  Some of you may feel like you're being attacked.  It's ok.  Just breathe through it.  Try, if you can, to set aside your own perspective and listen to what I'm about to say; try to understand where I'm coming from, even if what I'm saying makes you uncomfortable -- even if it makes you angry.  If we are ever to get to a place, as a movement, where we can speak freely to each other, we are all going to have to learn to listen to people telling us things we'd rather not hear.  And trust me, it's something I'm working on as well.  Ready? Ok, here we go...

There is a commonly used phrase that really bugs me.  I mean really bugs me.  The phrase in question is this: "I want to do well by doing good."  I imagine at least one person reading this has uttered those exact words.  I've heard it quite a bit, almost always coming from middle-to-upper class, self-described "liberals."  Every time I hear those words, I mentally translate them to: "I want to have my cake and eat it too."  Or, more specifically: "I want to have all of the convienences and luxuries that are available to affluent Americans, but I want to do it in such a way that allows me to pat myself on the back for being a good-hearted and charitable person as well."  Or, to put it even more bluntly: "I want to serve my greed in such a way that I don't end up appearing, or feeling, greedy."

Consider: on the one hand we have middle and upper-class individuals who want to do well by doing good, while on the other hand we have low and no-income people who just want to survive...by any means necessary.  A person must have a certain amount of privilege before they can even desire to "do well by doing good."  Many of us simply don't have the option to "do well," whether by doing good or otherwise.  While our more affluent allies have the privilege (yes, the privilege) of wanting to do well by doing good, us low-income folks have much more humble goals -- we want to be able to pay rent and purchase adequate food for our families; we want to have access to healthcare and maybe even have more than $50 in our bank account at the end of the month.  Which is to say, we aren't concerned so much with doing well as we are with just getting by.  That's why we're in this movement: the traditional economy isn't allowing us to even get by, much less "do well."

Really, it's a matter of ends and means.  To say that you want to "do well by doing good" is to say that doing "well" is your end -- your goal -- and doing "good" is the means you wish to employ to reach that end.  Doing good then, in this way of thinking, is merely instrumental, not essential.  That is, one does good as a means to accomplish something else (doing well) and not for it's own sake.  Imagine that it were not possible to do well by doing good, that doing good works and doing well financially were mutually incompatible.  If there were a decision required between doing good, on the one hand, and doing well, on the other, which one would you choose?   Which one would you give up if it turned out you couldn't both have your cake and eat it too?  If it simply weren't possible to do well by doing good, would you still do good?

Not only does the statement "I want to do well by doing good," bespeak a committment to, first-and-foremost, looking out for one's own financial interests, it also displays a curious refusal to understand the ways in which our economy creates people who "do well."  The salaries of managers and the profits of business owners are inversely proportional to the wages of rank-and-file workers -- every dollar that goes towards increasing management salaries or owners' profits is one dollar less that can be paid out to workers.   And, of course, the patterns of consumption that we enjoy are predicated on exploitative work arrangements.  Our cheap electronics are created by overseas slave-labor (or, at the very least, something very similar), not to mention the massive amounts of pollution generated in creating our smartphones, tablets and TVs.  The reason that we have so much poverty in this country and in the world at large is that the poverty of the masses is necessary to support the wealth of the few.  Creating a situation in which most people cannot "do well" is the prerequisite for allowing others to do so.  It is not physically possible for our economy, or our planet, to allow everyone to "do well," as defined by the current middle-class American standard of living -- if some are to have it, many others must be denied it.

Solidarity means, simply, that we commit ourselves to sink or swim together.

So what happens when a group containing a mix of people from different stations on the socio-economic ladder get together to create a co-op, or try to perform any other "good work"?  Maybe the middle and upper class folks want to do well by doing good -- maybe the low and no-income folks just want to do better than they are now.  The all-too-common result is that all involved get what they want...or at least what they'll settle for.  The people coming from more affluent backgrounds end up making the most -- i.e. doing well by doing good -- while the low-income folks settle for doing at least marginally better than they were before.  Thus, the unjust and dysfunctional dynamics of our capitalist economy are re-created in our cooperative projects.  Those who end up "doing well by doing good" are often as not oblivious to all this, while those who are not "doing well" (just "doing good") are generally well aware of what's going on, even if they choose to keep it to themselves.

And it doesn't help much that the people who make the most money, who really are doing well through their involvement in "good works," tend to present themselves as philanthropists, or at least as relatively selfless do-gooders.  Ironically, projects to help the poor are generally more lucrative for these do-gooders than for any of the people they are supposedly trying to help.  Thus co-ops that are created to provide good paying jobs in low-income communities end up paying the most to the middle-and-upper income people developing them, whether the good-paying jobs for members of the community materialize or not.  Co-ops (and worker co-ops in particular) are supposed to be a solution to income and wealth inequality, but many co-ops (and non-profits attempting to develop them) exacerbate this inequality through their unreflective ways of operating.

If we are to create a just economy, we must have solidarity with one another, regardless of where we hail from on the hierarchy of social and economic privilege.  However, solidarity is not something that is well understood, even by many of those who are working in the solidarity economy movement.  To me, solidarity means, simply, that we commit ourselves to sink or swim together.  It means that everyone is willing to make sacrifices for one another and for the group as a whole.  Demanding, or even desiring, to be paid $150,000 per year to help low-income people raise themselves out of poverty is not solidarity.  Seeking to "do well" while those you proclaim as your allies are simply seeking to get by is not solidarity.  Insisting on maintaining an environmentally unsustainable lifestyle that is predicated on the exploitation of masses of people, while at the same time trying to fight against that destruction and exploitation is not solidarity.

Many people in the co-op and solidarity economy movements do understand all this, and on a very deep level.  Many worker co-ops have uniform wages, regardless the role an individual is playing in the enterprise.  These worker-owners have moved beyond the somewhat childish wish to "do well by doing good," as well as the unambitious goal of simply doing better than they were -- they have dedicated themselves to doing as well as they possibly can, together.  That is real solidarity.  The rest of us would do well to emulate these true heroes of the new economy.  If we don't, our new economy may turn out looking depressingly similar to the old one.